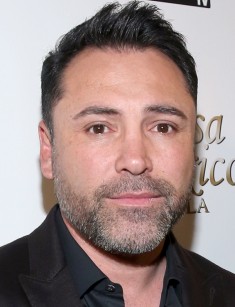 Oscar De La Hoya is a professional American boxer, a six-time world champion, the winner of the 1992 Olympics, the best boxer according to the Ring magazine. He finished his career on April 15, 2009.

Oscar was born on February 4, 1973 in Montebello, California and comes from a boxing family. His grandfather Vincente, father Joel Sr. and the elder brother were all boxers. At the age of six, Oscar fought at the ring, made by his cousin in the courtyard of the house.

The boy did not like boxing; he was fond of baseball and skateboard. But the family tried to change Oskar's interests and gave him money for fights. In order to win, the boy mastered the left hook, which often helped him to win his opponents. In addition, Oscar avoided blows in the face, for which he had a nickname "Golden boy".

At the age of 15 Oscar De La Hoya received the title of US boxing champion among juniors, and a year later he won the Golden Gloves competition. After the first victories, the period of preparation for the 1992 Olympics in Barcelona, began.

Oscar De La Hoya got to the final and fought against Marco Rudolph, to whom he lost in 1991 at the World Championship in Australia. At the Olympics, Oscar became a champion, knocking out his opponent in the third round. The joy of victory was tempered by the death of his mother, who died from a malignant tumor.

The victory of the boxer at the Olympics summed up his amateur career, in which Oscar achieved phenomenal results. In 228 battles, the athlete had 223 victories, in 163 of them he knocked out his opponents.

Early in his professional career, Oscar did not know defeats. Beginning with the second featherweight, the athlete moved to the light, and then to the first semi-middleweight division. In 1994, Oscar had a fight against WBO World Champion Jorge Paes, and a year later he won IBF World Champion Rafael Ruelas. In 1996 Oscar won the champion in the 1st welterweight Julio Cesar Chavez.

In 1997, De La Hoya moved up to the welterweight division and immediately won Pernell Whitaker on points in a 12-round fight. After that, he defeated Hector Camacho in the battle for the belt of the WBC champion. A year later, the boxer confirmed the title in a fight against Ike Quartey.

In 1999, there was the most widely publicized in the world media fight, which broke the record for ticket sales. On September, 18 in Las Vegas two undefeated WBC and IBF world champions met - Oscar De La Hoya and Felix Trinidad. The competition lasted 12 rounds. In the beginning of the fight, Oscar dominated but lost to Felix on points. Rehabilitated in a duel against Derrel Coley, in 2000 Oscar lost the fight against Shane Mosley on points.

In 2001, Oscar had a fight against the Canadian boxer Arturo Gatti. He demonstrated his best boxing skills and the opponent lost. After the 5th round, the referee stopped De La Hoya, and the judges announced the technical victory of the American. Moving to the first middleweight, Oscar won Javier Castillejo in 12 rounds, and in 2002 met with WBA champion Fernando Vargas, who was knocked out in the 11th round. In the same year, Oscar De La Hoya created his own corporation Golden Boy Promotions, which promoted boxers.

In 2003, the "golden boy" took revenge and met with his undefeated rival Shane Mosley, who again won the American. This only made the athlete stronger, and Oscar, raising the weight class to the average, went into the ring against undefeated WBO champion Felix Sturm. He defeated his opponent from Germany on points. De La Hoya became the only champion in 6 weight classes.

Having been defeated by Bernard Hopkins in 2004, Oscar moved to the first middleweight division and in 2006 knocked out Ricardo Mayorga. In May 2007, De La Hoya went to the ring against Floyd Mayweather in the fight for the title of WBC champion. In the intense struggle, which lasted 12 rounds, none of the boxers want to lose.

The controversial situation was resolved by the judges who gave the majority of points to Mayweather. Oscar was dissatisfied with the decision of the judges, but even such professionals as the Russian boxer, the former absolute world champion Kostya Tszyu, after watching the video of the battle, spoke in favor of the young Mayweather.

In 2008, the battle between Oscar De La Hoya and Filipino Manny Pacquiao took place. The fans of the "Golden boy" were disappointed because in the 8th round Manny won the opponent. After the defeat, Oscar De La Hoya announced his retirement from professional sports. The Boxer turned his attention to business, to the development of the sports agency.

In 2009, De La Hoya participated in a fight against the NBA player and Hollywood actor Shaquille O'Neal. The basketball player created his own show Shaq Vs, to which he invites the stars of the sport and competes with them in their categories. A 5-round match was organized with Oscar De Da Hoya in which the boxer won, beating the opponent on points.

In 2000, Oscar De La Hoya had relations with Puerto Rican singer Millie Correjer. The boxer at that time was fond of singing and even took lessons in vocals. A year later the young people got married. In 2005, the son Oscar Gabriel De La Hoya was born to the boxer's family, and in 2007 his wife gave birth to Oscar’s daughter Nina Lauren Ninetta De La Hoya.

Soon the family had problems because of the alcohol abuse of the athlete. After the end of his career, Oscar began spending less time with his family. Oscar and his wife broke up. But Oscar decided to get treatment and then he returned to the family.

In 2017, the media reported that the general director of Golden Boy Promotions was arrested in the Pasadena, California for driving under the influence of alcohol. Soon the misunderstanding was settled, and the man was sent home.

In early summer, Oscar De La Hoya promoted the match between Gennady Golovkin and Saul Alvarez. He called the battle between two stars of the ring, the fight worthy of comparison with the fights of the great boxers of the past: Mohammed Ali vs. Joe Frazier, Marco Antonio Barrera vs. Erik Morales. 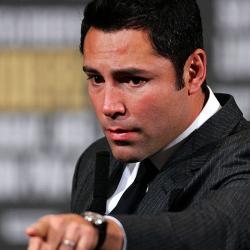