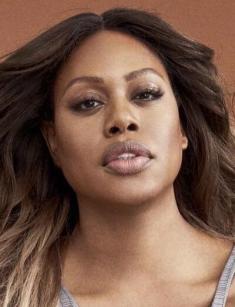 Laverne Cox, who was born on the 29th of May, 1972, is an Alabama-born American TV star and, by the way, LGBT advocate. Laverne is a transgender woman.

Laverne is better known for starring in such projects as Netflix's Orange Is the New Black, and Musical Chairs, and also for co-hosting the TRANSform Me TV series and winning Primetime Emmy Award.

Laverne is from Mobile, a city that is located in Alabama state. She was raised without a dad by her mom and grandmother. In her childhood, Laverne first realized that she wants to be a woman despite her biological gender. She often got bullied in high school just for acting «the way boys must not act». After completing high school in fine arts education, Laverne enrolled at a university in Indiana, but then, after two years of studying there, she decided to transfer to a college in New York.

Laverne's debut was an appearance in Betty Anderson's short movie Deidre. She started her acting career in university, and now Laverne is known for appearing in many TV series, including Orange Is the New Black, Law & Order, TRANSform Me, The Mindy Project, America's Got Talent, The Blacklist, Inventing Anna, and many others.

Laverne is an LGBT activist who stands for every community member's rights. She often speaks about why it is important to support people like her and that there is no something wrong with it. Laverne even appeared in Taylor Swift's music video for "You Need To Calm Down", a song that is partly about LGBT rights. She has a huge impact on people and her fans, and even in 2016, she was awarded by The New School (NYC) for her work in the fight for gender equality.