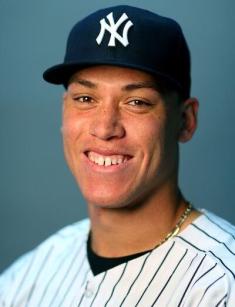 Aaron Judge is a famous Major League Baseball player, and multiple awards winner from the United States. He plays outfield for the New York Yankees. Judge has achieved a legendary status among his fans due to his superior athletic skills, leadership, classy performance during the games, and dedication to the sport.

Judge was named the 2017 American League Rookie of the Year. He is likely to receive the award for being the most valuable player, after demonstrating a powerful on-field performance in 2022.

Judge is one of the largest American baseballers and the most recognized player of his team. He prefers the uncapped Chandler AJ99.2 maple bat. Fans and teammates call him BAJ, short for "Big Aaron Johnson," or "All Rise." He wears 99 on his uniform jersey.

Aaron Judge was born in Sacramento, CA. His birth date is April 26, 1992. He was adopted as a baby by a teacher couple from neighboring Linden. Wayne and Patty Judge have also adopted John, Aaron's older biological brother. Judge is of mixed Caucasian and African-American heritage.

Aaron Judge was an athletic child. He excelled playing for his school's football, baseball and basketball teams. He declined several football scholarships to focus on baseball, a decision supported by his parents.

Aaron Judge started his college career in 2010 by playing for the Fresno State Bulldogs, becoming the most productive member of his team, leading in doubles, RBIs and home runs.

2013 was the year when Judge was drafted by the New York Yankees to play in the Minor Leagues. Judge's contract netted him a $1.8 million signing bonus. He spent most of the season benched due to a trauma he received during the practice.

He made his on-field debut playing for the Charleston RiverDogs, an affiliate team of the New York Yankees. During his two years spent in the Minor Leagues, Judge consistently ranked in top 10 for all stats.

Judge transitioned to MLB in 2016. He hit his first home run in the debit game against the Tampa Bay Rays. Again, he spent most of the season off the field due to a strained muscle.

His 2017 Rookie season proved to be very successful. Judge hit the first grand slam against the Oakland Athletics, was named the Rookie Player of the Month several times, and set a new record hitting the most home runs as a rookie player. Judge received the unanimous vote in support of him being awarded the Rookie of the yearward. He fell short of the Most Valuable Player title, losing to Jose Altuve.

2022 was the year when Judge became the most-talked about baseball player in the United States. He went on to beat Babe Ruth's record, hitting 61 home runs in the season and stealing 15+ bases. Judge will become a free agent after the 2022 season. He is tied with Shohei Ohtani who plays for Los Angeles Angels as the AL MVP.

Judge met his future wife Samantha Bracksieck in high school. He promotes Adidas and runs the Aaron Judge All Rise Foundation for children. His salary for 2022 is 19 million.