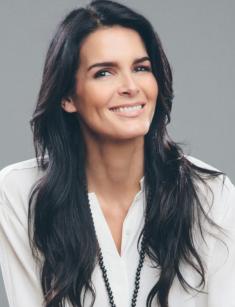 She is a well-established actress and model. Since her childhood, Angie worked as a model and regularly took part in beauty contests. That experience built her character and paved the path to her future demanding profession.

Today Angie continually appears on the big screen as well as in the considerable TV projects on the small screen. Thanks to her acting skills, Angie can enforce any cast and attract the public’s attention to the plot. Her multitalented nature allowed Angie to work as a voice actress too.

The actress was born in New York 47 years ago, in 1972. Her nationality is American. Angie’s ethnic background is mixed. Her ancestors were Irish, Scottish, Greek, Welsh, and Dutch.

She began her career as a child model. Since her early years, Angie got accustomed to being in the spotlight. Having a perfect physique and vivid artistic skills, Angie early picked a career.

Growing up, she continued her modeling career. Angie worked with the biggest brands and walked the most fashionable runways. Besides, she repeatedly appeared on the covers of many magazines.

From the starting point of her career, Angie was doomed to success. She has got a stunning appearance, and her tremendous look allowed her to take her first roles and display what she could. However, the actress began her acting career thanks to the incident. Flying on the board of the airplane, she met the famous producer David Hasselhoff. That case allowed her to receive the first leading role in ‘Baywatch Nights.’ Later she earned much fame and recognition after starring in the TV series “Law & Order.” She played on the picture for three years but then decided to leave the project to focus on her movie career. That time Angie stated she preferred to work in movies to TV series.

In 2003 the actress played the supporting role in the commercially successful “Agent Cody Banks.”

Primarily her career was thriving. However, Angie worked on several failed projects. Thus she took part in the pilot Secrets of a Small Town, which didn’t go to series. The other TV project, “Inconceivable,” was closed after two episodes.

After a period of failures, the actress took her lucky ticket. From 2010 till 2016, she appeared in the TV series “Rizzoli & Isles,” becoming of the best projects with her participation. Her playing was highly appreciated, and the actress got several awards.

Angie’s skills are highly appreciated in the entertainment industry. She earns an enormous salary of $80,000 per year. The demanding actress gathered a good fortune and can not to think about financial issues. Her net worth is estimated at $14 million.

Besides acting, Angie posed nude for the Allure magazine and starred in several commercials. IN 2012 she made a guest appearance on the late-night show and confessed her interest in playing She-Hulk. Today she continues to stay one of the most desired A-list actresses on Hollywood.

The stunning actress continues to look great and maintain her youthful charm. She has got a perfect measurement 34-25-35 thanks to keeping a special diet and doing regular exercises. Despite rumors, Angie has never undergone any plastic surgeries.

In the 2000s, the actress had a relationship with the athlete Jason Sehome. He popped the question to her on the air. In 2000 she appeared on the late-night show with Jay Leno. The host of the show called a surprise guest after that Jason appeared on the stage, knelt on one knee, and proposed. The actress said, “yes.” After one year of engagement, the couple married. This marriage gifted them three kids, all of them daughters. In 2014 the couple separated.

On the 25th of December, the actress announced her engagement with Greg Vaughan. Her fiancé is a 46-years-old actor and a former model who got the prominence after starring in several soap operas, “Charmed” among them. They began dating in 2017 and since the very beginning was very open about on social media. The accounts of the actor and actress on Instagram is full of pictures of the twosome and their kids.