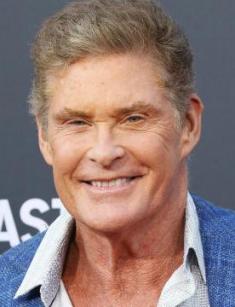 The actor and singer David Hasselhoff is listed in the Guinness Book of Records as the most watched person on television. The success of the American actor lies in the most popular TV series of the 1990s called Baywatch, where he was running side by side on the white Pacific coast with Pamela Anderson. David Hasselhoff has an estimated net worth of $110 million.

David Michael Hasselhoff was born on July 17, 1952, in Baltimore, Maryland, in the family of a housewife Dolores Therese (née Mullinex) and Joseph Vincent Hasselhoff, a business executive. David has German, Irish, and English roots.

First, David spent his childhood in Jacksonville, Florida. Then his relatives moved to Atlanta, Georgia, where the boy attended Marist School. At the age of 7, the American actor made his debut on stage, playing in the school production called Peter Pan. While his classmates wanted to become astronauts, police, and firefighters, Hasselhoff dreamed of performing on Broadway.

In 1970, David graduated from Lyons Township High School in La Grange, Illinois His social activities (he was the president of the choir, captain of the volleyball team, a member of the speech team and frequently appeared in school plays) helped Hasselhoff to easily enter the Oakland University and then the California Institute of the Arts.

In his youth, Hasselhoff was mind-blowingly handsome with curly hair, an aquiline nose, and sensual lips, combined with the charisma, which opened him the door to show business. Mostly because of his appearance, David received the role of William Foster in the series The Young and the Restless in 1974. The actor was playing this role for a long seven years, from 1975 to 1982. This work turned a novice American actor into a superstar.

Perhaps Hasselhoff would continue to act in The Young and the Restless, but the producers decided to renew the line-up, adding new characters to those who were already familiar to the audience. David couldn't stand the competition, so he left the project. Then he was lucky to get the offer from NBC President Brandon Tartikoff to play the leading role in the series Knight Rider.

The plot is focused on the story of a police officer Michael Long, who was killed on duty. The elderly billionaire and inventor named Wilton Knight brings the young man to life and makes him responsible for the protection of the city from evil.

But the main project of the young American was the series called Baywatch. After one season, released in 1989, Hasselhoff's photo in a swimsuit was copied no less passionately than posters with Pamela Anderson. In 1991, the actor invested in the show and became an executive producer. Of course, the amount of his airtime also increased.

The legendary series lasted for 11 years and was watched by more than a billion viewers in 140 countries. The impressive statistics allowed Hasselhoff to be included in the Guinness Book of Records as the most watched television actor. The American earned more than $100 million while filming in the TV show.

But working on Baywatch was not an obstacle for Hasselhoff to participate in individual projects such as The Final Alliance (1990), Gridlock (1996), Legacy (1998), Nick Fury: Agent of Shield (1998), and Layover (2001). At the same time, David fulfilled his lifelong dream and made his Broadway debut in Jekyll & Hyde (2000).

In the 2000s, Hasselhoff was no longer a handsome young man, and therefore, he had to surprise the audience with his eloquence and wit. He had a major role in The SpongeBob SquarePants Movie released in 2004, appeared in 2006 Click, 2011 Hop, Guardians of the Galaxy Vol. 2 (2017).

In 2010, David, along with daughters Taylor Ann and Hayley, starred in the reality show The Hasselhoffs. The show was an attempt to revive an American career and push kids into Hollywood. But the hopes of the star family did not come true. The first episode was watched by 718 thousand viewers, the second one by 505 thousand. And the production center A & E decided to close the project.

The first steps as a singer Hasselhoff made in the children's program Kids Incorporated in 1975, performing the song "Do You Love Me." In 1989, Hasselhoff's album Looking for Freedom topped American charts. It went triple platinum in Europe, thanks mainly to the success of the single of the same name in Germany.

The fact is that David performed "Looking for Freedom" at the Berlin Wall 2 months after its formal "collapse" but nine months before the actual unification of the West and East Germany. Even now this song is a pop anthem of East Germans. One day German basketball player Dirk Nowitzki was asked what he was doing to focus before the decisive shot, and he said that he was singing "Looking for Freedom."

In 2006, Hasselhoff released a video for the song "Jump in My Car," in which the actor parodied his character from Knight Rider. The Pontiac Trans Am from the video is an exact copy of Michael Long's KITT car: right-hand drive and even with a catapult.

In support of the Swedish short film Kung Fury, David recorded the single "True Survivor" in 2015. The video was a parody of the 1980s when people were interested in dinosaurs, skateboarding, Scandinavian mythology and time traveling. On the eve of the release of Guardians of the Galaxy Vol. 2, Hasselhoff released the song called "Guardians' Inferno."

Music became the main occupation of Hasselhoff at the end of his acting career in the 2000s. In total, the singer released 13 albums.

David Hasselhoff had three wives. Actress Catherine Hickland became the first wife. Their wedding, which took place on March 24, 1984, was recreated in the series Knight Rider (episode The Scent of Roses). The marriage, which was accompanied by gossip and rumors about cheating, did not last long, and the couple broke up in 1989.

A few months later, Hasselhoff married actress Pamela Bach. They had two daughters, Taylor Ann (May 5, 1990) and Hayley Hasselhoff (August 28, 1992). In January 2006, the actor, citing irreconcilable differences, filed for divorce. At first, custody of the children was separate, but Hasselhoff later obtained custody of both daughters.

In 2012, the actor met model Hayley Roberts at a rugby match. The couple married on July 31, 2018. The wedding ceremony took place in Italy.

In May 2007, on the Internet appeared a video in which Taylor Ann asked his severely drunk father to give up his bad habit, otherwise, not only his career, but his entire personal life could be ruined. Hasselhoff said that the recording was posted on the Internet at his request as he wanted to see himself from the side. In May 2009, Hasselhoff's attorney called him "a recovering alcoholic."

According to the photos on Instagram, in 2019 Hasselhoff is going to go on tour through Europe: Germany, France, UK, Switzerland, Italy, Spain. His performances are scheduled until October. Name Freedom! hints that the program includes already favorite hits.

The actor and musician has plans for 2019. He is currently working on voicing short film Kung Fury 2 and the thriller Power Play.