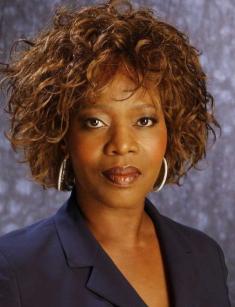 The American actress has a bright talent which guaranteed her a long-lasted career. She is a dramatic actress, producer, owner of numerous awards. But the actress has a clear-cut system of priorities and in spite of her successful career, considers herself primarily as a wife and a mother and secondly as an actress. Besides her career on the screen and stage, she proved to be an activist whose activity helped save the life of African orphans.

Alfre was the third youngest child in the family. She succeeded in sports activities, especially in cheerleading and track. Alfre was convinced to try herself in Acting; this experience helped to reveal her nature talent what was evident at first sight. Her hard work and nature skills helped Alfre to graduate the university with a bachelor’s degree in Acting. The actress raised in Texas in the time of segregation. She underlines that as a girl she lived in a vibrant African American community, and in a peaceful atmosphere, the actress wasn’t called “the n-word” until I was in college in Boston. All members of her family learned to shoot, drive a tractor, and other bonuses of farm life.

Before 1981 she played supporting roles, but the situation changed after her appearance on the movie “Grand Canyon.” This movie was a critically successful project that helped the American actress start starring on a big screen in serious roles. The actress participated in numerous famous films, “Steel Magnolias,” “The Signing Detective,” “K-PAX” among them.

For her acting career, she appeared on screen alongside poplar actress and actors. Her successful project is “The Family That Preys” where she played alongside Kathy Bates. She also worked with Blair Underwood in “The Wishing Tree.” The actress played numerous TV roles, Betty Applewhite in the serial “Desperate Housewives” is the brightest ones.

The actress remains a demanding professional. Recently Alfre played a role in “The Lion King,” she plays Simba’s mother. She appeared in Netflix serial “Juanita” in a leading role. Alfre appeared in Avengers. She made a cameo in the part of Miriam Sharpe in “Captain America: Civil War.”

Thanks to her productive work, the journalist called Alfre, “an activist who acts.” She founded a non-profit organization, which advances democracy and equality, combats the African AIDS pandemic. Her organization raised millions of dollars and helped more than three thousand of African AIDS orphans. She supports LGBT and same-sex marriage.

The American actress was married in 1983. Her only husband is Alfre’s long-time boyfriend; the couple has two children. The actress became a mother for the first time at the age of 36. Alfre states that she is a wife and a mother and secondly, she is an actress. She is active on Twitter and Instagram.