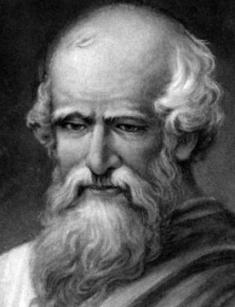 The ancient Greek physicist, mathematician, and engineer Archimedes made many geometric discoveries, laid the foundations of hydrostatics and mechanics, created inventions that served as a starting point for the further development of science. Legends about Archimedes were created during his lifetime. The scientist spent several years in Alexandria, where he met and became friends with many other great scientists of his time.

The biography of Archimedes is known from the works of Titus, Cicero, Polybius, Livy, Vitruvius, and other authors who lived later than the scientist himself. It is difficult to assess the reliability of these data. It is known that Archimedes was born in the Greek colony of Syracuse, located on the island of Sicily. His father, presumably, was the astronomer and mathematician Phidias. Plutarch also claimed that the scientist was a close relative of the excellent and skillful ruler of Syracuse, Hiero II.

Archimedes probably spent his childhood years in Syracuse, and at a young age, went to Alexandria of Egypt to find a suitable education. For several centuries, this city was the cultural and scientific center of the civilized Ancient World. The scientist presumably received primary education from his father. After living for several years in Alexandria, Archimedes returned to Syracuse and lived there for the rest of his life.

The scientist was actively developing mechanical constructions. He laid out a detailed theory of the lever and effectively used this theory in practice, although the invention itself was known before him. In particular, based on knowledge in this area, he made several block-lever mechanisms in the port of Syracuse. These adaptations simplified the lifting and movement of heavy loads, allowing them to speed up and optimize the operation of the port. And the "Archimedes' screw," designed for bailing out water, is still used in Egypt.

The theoretical research of the scientist in the field of mechanics is of great importance. Based on the proof of the law of leverage, he began to write the work On the Equilibrium of Flat Figures. The test is based on the axiom that on equal shoulders, equal bodies will necessarily be balanced. The same principle of the book structure, beginning with the proof of his law, Archimedes observed when writing the work On Floating Bodies. This book starts with a description of the well-known law of Archimedes.

Discoveries in mathematics were a real passion of the scientist. According to Plutarch, Archimedes forgot about food and self-care when he stood on the threshold of another invention in this area. The main direction of his mathematical research was the problems of numerical analysis.

Even before Archimedes, formulas were invented to calculate the areas of a circle and polygons, the volumes of a pyramid, a cone, and a prism. But the scientist's experience allowed him to develop General techniques for calculating quantities and areas. To this end, he perfected the method of exhaustion, invented by Eudoxus of Cnidus, and brought the ability to apply it to a virtuoso level. Archimedes did not create the theory of integral calculus, but his work later became the basis for this theory.

Also, the mathematician laid the foundations of differential calculus. From a geometrical point of view, he studied the possibilities of determining the tangent to a curve, from a physical point of view – the speed of a body at any given time. The scientist studied a flat curve known as the Archimedean spiral. He found the first generalized way to find tangents to a hyperbola, a parabola, and an ellipse. The scientists were able to fully understand and disclose all the ideas of Archimedes, which reached their times in his surviving works only in the seventeenth century. The scientist often refused to describe inventions in books, which is why not every formula he wrote has survived to the present day.

A worthy discovery for the scientist was the invention of formulas for calculating the surface area and volume of the ball. While in the previously described cases, Archimedes modified and improved other people's theories, or created fast methods of calculation as an alternative to existing formulas, in the case of determining the volume and surface of the ball, he was the first person to do it. Before him, no scientist had coped with this task. So the mathematician asked for a ball inscribed in a cylinder to be stamped on his tombstone.

The discovery of the scientist in the field of physics was a statement that is known as the law of Archimedes. He determined that every body immersed in a liquid is under pressure by a propulsive force. It is directed upwards and is equal in magnitude to the weight of the liquid that is displaced when the body is placed in the liquid, regardless of what the density of this liquid is.

There is a legend associated with this discovery. Once Hiero II ostensibly turned to the scientist, as he doubted that the weight of the crown manufactured for him fitted the weight of gold, which was provided for its creation. Archimedes made two bars of the same weight as the crown: silver and gold. He then placed the bars in a vessel of water one by one and noted how much the water level had risen. Then the scientist put the crown in the vessel and found that the water did not rise to the level to which it had risen when each of the bars had been placed in the vessel. Thus it was discovered that the master had kept some of the gold for himself.

There is a myth that a bath helped Archimedes to make a fundamental discovery in physics. While swimming, the scientist allegedly lifted his leg slightly in the water, found that it weighed less in the water, and experienced an Epiphany. A similar situation took place, but with its help, the scientist discovered not the law of Archimedes, but the law of specific gravity of metals.

Archimedes was the inventor of the first planetarium. With the movement of this device, the following could be observed:

The scientist also tried to create formulas for calculating distances to celestial bodies. Modern researchers suggest that Archimedes considered the Earth to be the center of the world. He believed that Venus, Mars, and Mercury revolve around the Sun, and the whole system revolves around the Earth.

Much less is known about the private life of the scientist than about his science. Even his contemporaries composed numerous legends about the gifted mathematician, physicist, and engineer. Legend has it that one day, Hiero II decided to present Ptolemy, king of Egypt, a multi-decked ship as a gift. The water vessel was named "Syracuse," but it could not be launched.

In this situation, the ruler again turned to Archimedes. From several blocks, he built a system by which the descent of the massive vessel was made with a single movement of the hand. According to the legend, during this movement, Archimedes said:

"Give me a foothold, and I'll turn the world around."

In 212 BC, during the Second Punic War, Syracuse was besieged by the Romans. Archimedes actively used engineering knowledge to help his people win. So, he designed throwing machines, with which the soldiers of Syracuse threw heavy stones at opponents. When the Romans rushed to the walls of the city, hoping that there they would not fall under fire, another invention of Archimedes, light throwing devices of close action, helped the Greeks to throw their balls.

The scientist helped his compatriots in naval battles. The cranes he designed would grab enemy vessels with iron hooks, lift them slightly, and then abruptly throw them back. Because of this, ships capsized and crashed. For a long time, these cranes were considered something of a legend, but in 2005, a group of researchers proved the efficiency of such devices, reconstructing them from the surviving descriptions.

Thanks to the efforts of Archimedes, the hope of the Romans to storm the city failed. Then they decided to move on to the siege. In the autumn of 212 BC, the colony was taken by the Romans as a result of treason. Archimedes was killed during this incident. According to one version, he was hacked to death by a Roman warrior, whom the scientist attacked for stepping on his drawing.

Other researchers claim that the place of death of Archimedes was his laboratory. The scientist allegedly became so interested in research that he refused to immediately follow the Roman soldier, who was ordered to conduct Archimedes to the commander. The latter, in anger, pierced the older man with his sword.

There are still several versions of this story. Nevertheless, they agree that the ancient Roman politician and military leader, Marcellus, was extremely saddened by the death of the scientist and, uniting with the citizens of Syracuse, as well as with his own subjects, gave Archimedes a magnificent funeral. Cicero, who discovered the ruined grave of the scientist 137 years after his death, saw a ball on it, inscribed in a cylinder.