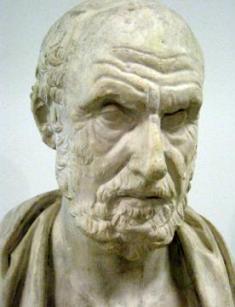 Modern people know Hippocrates, who lived in the fifth century BC, for the oath that doctors take when they begin their professional way. The ancient Greek philosopher, talented physician, and natural scientist is the father of medicine; thanks to his works, the fundamental principles of medical knowledge and ethic principles for doctors were established.

Historians have been gathering information about Hippocrates’s life for a long time. Some facts are contradicting; they are inaccurate or even false. Biographers built a more or less coherent story based on the works of Soranus of Ephesus (the Roman historian who described Hippocrates’s life first), Plato (Socrates’s student and philosopher), and the doctor’s own texts.

The naturalist was born on Kos island (Turkey). The boy’s father, Heraclides, was also a physician; the mother’s name was either Praxitela or Phaenareta. The name “Hippocrates” means “horse power”.

The future doctor began to study at the Asclepius’s (god of medicine) temple, but the basic knowledge came from the father and grandfather – they were famous among people for their healing talents.

The young man became a student of prominent philosophers of his epoch, Gorgias and Democritus, who helped him enrich his knowledge. The inquisitive youth wanted to continue his education and travel across the world to learn more. Greece was abundant in doctors, and Hippocrates met many of them; he devoured every word about science and thoroughly examined tables on walls of Asklepion’s temples.

Ignorant people believed that diseases were caused by magic, and evil spirits from the other realm could send sickness. The ancient doctor’s philosophy was entirely different – he believed that things happened naturally. Hippocrates created a scientific approach and proved the speculations about witchcraft were wrong; he started treating people in various cities and countries.

The medical pioneer also presented his worldview in written works and logically supported his arguments. They were accompanied by observation and facts; disease-related predictions were based on actual examples and cases. Later, Hippocrates’s students founded a school on the Kos island; it flourished and guided successors in the development of medicine.

Speaking of the greatest scientific discoveries, the following are worth mentioning:

In addition, Hippocrates is known for ethical principles and carefulness: he recommended to trust nature and avoid too many drugs. The man discovered more than 300 sorts of medicaments, many of which are used today (honey, poppy infusion, spurge juice, etc.).

The doctor could fill teeth (the information was lost), set bones, and treat breaks with a special bench; it bore some resemblance to a fracture table. Hippocrates paid much attention to his patients’ mindsets and desire to live; he did not view recovery only as a doctor’s achievement.

The text of the Hippocratic Oath was changing throughout centuries, but the basic principles remained the same: humanism, mercy, and empathy for any person. For example:

Many countries follow the tradition for medical school graduates: they pronounce the oath when they receive their diplomas. The meaning of the text underwent some transformations and sometimes lost its primary message.

The medical genius was married to a woman from a noble family; their wedding took place after Hippocrates’s home education finished. Three children were born in this union: the sons Thessalus and Draco and a daughter, whose name is unknown.

Following the family tradition, the boys studied medicine. The information about the daughter is more like a legend; she lived in Astypalaia (the island in the Aegean Sea) and married Polybus, her father’s student and successor.

The children respected their father deeply and even named their own kids in honor of the grandfather.

Hippocrates died at a senior age (83-104) and left an extended body of works on medicine and philosophy. The man died in Larissa, Thessalian valley, Greece; he was buried in Girton. Today, visitors can see a monument to Hippocrates on Larissa; it is a popular tourist spot.

Some sources report that a cluster of bees appeared on the doctor’s grave. Wet nurses often came there to take some curative honey to treat children’s aphthae by rubbing it.

After his death, Hippocrates became a half-god figure among people; his fellow citizens annually gave him offerings, just like to any god. Some believed that the philosopher began to heal souls in another dimension.

The works by the father of the medicine were lucky to survive: when wars and fires destroyed Greece, they were stored in the Library of Alexandria. Later, the valuable manuscripts were taken to Constantinople.

Although historians cannot confirm some legends about the genius physician, they continue to exist. Here are some of them.

“In whatever disease sleep is laborious, it is a deadly symptom; but if sleep does good, it is not deadly”.

“As to diseases, make a habit of two things — to help, or at least to do no harm”.

“Science is the father of knowledge, but opinion breeds ignorance”.