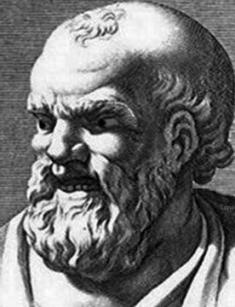 Democritus of Abdera is a famous ancient Greek philosopher, who is considered to be the founder of the atomistic theory. The researcher studied hard and natural sciences and contributed to the creation of the first calendar.

Democritus was born in Abdera, Thrace; the date of birth is estimated at 460 BC. The boy’s family was known for their wealth and virtuous life; he had two brothers, Herodotus and Damosis. There were many stereotypes about Abdera’s ignorance and simplicity; its citizens were often viewed as fools. However, the smart boy refuted it.

The father left his children land, three hundred heads of cattle, slaves, and money; he hoped the fortune would multiply in their hands. However, Democritus rejected the property and took a hundred talents. Relatives expected him to buy some goods or spend the money on trading. However, the young man started traveling – he had been dreaming of reaching the truth since his childhood.

For the next eight years, Democritus visited Persia, India, Egypt, and Babylon. He lived a year and a half in Athens and listened to Socrates’s and Anaxagoras’s lectures; the Persian Chaldeans’ and magi’s knowledge was also available for him. However, the man had to return home because of financial needs; as long as he had spent his father’s money, the philosopher had to live at the expense of his brother, Damosis.

In Abdera, Democritus was arrested for embezzlement of assets; the young man protected his rights independently and reported on his activities: not empty wandering but learning other people’s wisdom, sciences, and traditions. At the end of the speech, he read aloud some extracts from his book, The Great Cosmos, about the origin of the universe and structure of objects. Citizens acquit him on all charges and awarded him money. Cicero, Diogenes Laërtius, and Athenagoras confirmed this episode in their works.

Life and scientific experiments of the famous Abderian could not pass unnoticed; many people thought he was insane. Democritus liked to walk in a cemetery and reflect on the creation of the world in a peaceful, silent atmosphere. He could start laughing with no reason; according to the man, life challenges were nothing in comparison with the large scale of the universe.

One day, friends invited the famous doctor Hippocrates to treat the lunatic “laughing philosopher”: people saw him tore dead animals’ bodies apart, take them out, and summarizing his thoughts. The physician said the “patient” was totally healthy, both physically and mentally; moreover, he met such an intelligent and educated man for the first time.

Democritus studied physics, astronomy, medicine, mathematics, and music – there was no sphere where his excellent mind would fail. The researcher is the founder of the atomic model that described the world as a combination of emptiness and atoms. His contribution to diverse sciences was essential.

Thus, the ancient Greek materialism was based on Democritus’s teachings; its principles manifested themselves in Epicurus’s philosophy.

Dionysius of Halicarnassus set apart three Greek philosophers whose poetic style and rhetoric were splendid: Aristotle, Plato, and Democritus. There is a legend that Plato ordered to buy all works of his opponent and destroy them, but whether it was true is unknown.

The wise man thoroughly studied Hellenic philosophy; Leucippus was one of the most notable figures for him. The mentor moved to Abdera from Hyele and organized an atomistic school. Democritus joined him and turned out to be a loyal student and supporter of the mysterious philosopher; he picked up the basic ideas of the atomic structure from his teacher.

The fundament of existence is the core problem in Democritus’s philosophy. He tried to comprehend the essence of matter and suggested some ideas that became genius estimations. The theory is that nature and matter are primary while senses, souls, and gods are secondary; in other words, atoms and emptiness are the essential parts, and all the rest is additional. The world has no colors, smells, tastes, and sizes; it is the result of atomic effects on human receptors. The scientist argued that nothing could appear from non-existence and disappear: atoms did not transform – they remained the same. The particles’ amalgamation and decomposition did not cause any new phenomena or destruction.

There is a popular plot in the European philosophy and painting: the comparison of two philosophers whose positions were polar opposites. Laughing Democritus and crying Heraclitus were memorable figures: the former viewed human life as something funny and useless; the latter was upset and empathetic to everyone.

The philosopher had no personal life; he did not approve of sexual life, as it was the predominance of pleasure over consciousness. A man was led by animal instincts in such moments – it was not appropriate for a scientist. Democritus treated women as stupid, useless creatures, whose only ability was to procreate.

Parenthood did not inspire him – little children would interfere with intellectual and observational activities. Thus, Democritus had no offspring. Tertullian claimed the 90-year-old man blinded himself to avoid the desire, but this hypothesis proved to be false – he lost his sight naturally.

According to Hipparchus, the great philosopher died painlessly: the 109-year-old man had no diseases. Three days before, Democritus asked to bring hot bread and buns to his room to enjoy their smell.

The state covered all the funeral ceremony expenses; many citizens came to pay their last respects.