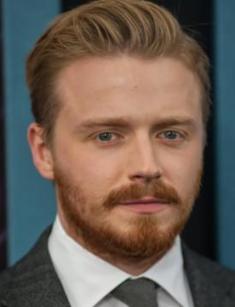 Jack Lowden is an English screen and stage actor who starred in such famous movies as War & Peace, Ghosts, and The Passing Bells. The popular magazine Screen Daily named him one of the UK Stars of Tomorrow.

Jack was born in the town of Chelmsford, which is located in Essex. But the boy and his younger brother Calum spent their childhood in the Scottish town of Oxton, where the family moved a few years later. By the way, Lowden’s brother graduated from the ballet school and is now the first soloist of the Royal Swedish Ballet.

The Lowden family was not connected with the art world. His father Gordon was a bank clerk for 40 years; mother Jacquie changed many professions and worked a veterinarian for a long time. Jack dreamed of becoming a football player and supported the Glasgow Rangers together with his father.

However, when Jack was ten years old, he began to study at the Scottish Youth Theatre. Two years later, the boy perfectly mastered the art of pantomime and performed in various productions at the King's Theatre in Edinburgh.

Lowden graduated from Earlston High School, a boarding school. While studying, he went to London and took a summer acting course at the Royal Academy of Dramatic Arts.

In addition to the theater, Jack was very interested in opera singing. So, he joined the Amateur Operatic Society and performed on stage together with its members. Later, he improved his singing skills and drama art at the very prestigious Royal Scottish Academy of Music and Drama in Glasgow, which he graduated in 2011.

Jack Lowden made his screen debut in an advertisement for the trendy Scotland soft drink Irn-Bru. As for feature films, Lowden first appeared in an episode of the TV series Being Victor. Then he played in the biographical drama Mrs Biggs, based on real events, the thriller uwantme2killhim?, and the war action movie '71.

But throughout his early career, Jack considered himself to be a theater actor, so he did not choose the scripts which required a long-term absence from the stage. But he had a high profile in the theater. The productions of Chariots of Fire and especially Black Watch earned him several prestigious theater awards.

Indeed, the theatre became a golden ticket for Lowden to the world of great cinema. He and actress Lesley Manville played in the wonderful adaptation of Henrik Ibsen's drama Ghosts, which earned Jack the British Awards for actors under age 30.

Then, Jack starred in the war drama The Passing Bells, along with another rising star, Patrick Gibson, and attracted the attention of viewers again.

But the actor’s most significant work is the film adaptation of Leo Tolstoy’s epic novel "War and Peace." Jack played one of the title characters, Nikolai Rostov. During the filming, which took place in England, Russia, and Latvia, Lowden had to learn to use ancient weapons and ride a horse.

Jack Lowden is not married, but he dates a long-time girlfriend, Vicki Byers.

However, nowadays, the young people see each other less often, because the actor lives in London, and his lover stays in Scotland, where she builds her career.