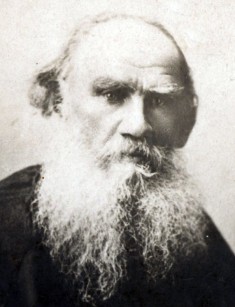 The Count Leo Tolstoy, a classicist of Russian and world literature, is called the master of psychology, the creator of the genre of the epic novel, the original thinker and teacher of life. The works of the brilliant writer are Russia's greatest heritage.

In August 1828 the classicist of Russian literature was born at Yasnaya Polyana, the Tula province. The future author of "War and Peace" was the fourth child in the family of eminent noblemen. On the paternal line, he belonged to the ancient family of Count Tolstoy, who worked with Ivan the Terrible and Peter the Great. On the maternal line, Leo Nikolayevich is a descendant of the Ryurikov family. It is noteworthy that Lev Tolstoy and Alexander Pushkin had a common ancestor - Admiral Ivan Mikhailovich Golovin.

Leo Nikolayevich's mother - Princess Volkonskaya - died from a family fever after the birth of her daughter. At that time, Leo was not even two years old. Seven years later the head of the family Count Nikolai Tolstoy died.

The writer's aunt T.A. Ergolskaya was responsible for the children’s upbringing. Later, the second aunt, Countess A.M. Osten-Saken, became the guardian of the orphaned children. After her death in 1840, the children moved to Kazan, to a new guardian - their father’s sister P.I. Yushkova. The aunt influenced her nephew, and the childhood in her house, considered as the most cheerful and hospitable in the city, the writer called happy. Later, Leo Tolstoy described the impressions of life in the Yushkov estate in his novel "Childhood".

The writer got the primary education at home, taught by German and French teachers. In 1843 Leo Tolstoy entered the Kazan University, choosing the faculty of Oriental languages. Soon, as he was a bad student, he moved to another faculty - a law faculty. But here he did not succeed either: two years later he left the university without getting a degree.

Leo Nikolayevich returned to Yasnaya Polyana, wishing to get along with the country people. The idea failed, but the young man regularly kept a diary, loved secular entertainment and loved music. For hours Tolstoy listened to Johann Bach, Frederic Chopin and Wolfgang Amadeus Mozart.

Disappointed with the life of the landowner after the summer spent in the village, the twenty-year-old Leo Tolstoy left the estate and moved to Moscow and from there to St. Petersburg. The young man was chose between preparing for the Ph.D. examinations at the university, music classes, cards games and gypsies, and dreaming of becoming an official or a cadet of the Horse Guards regiment. The relatives called Leo "the most airheaded boy", and it took years to pay his debts.

In 1851, the writer's brother, the officer Nikolai Tolstoy, persuaded Leo to go to the Caucasus. For three years Lev Nikolaevich lived in a village on the bank of the Terek River. The nature of the Caucasus and the patriarchal life of the village later appeared in the novels “The Cossacks” and “Hadji Murat”, “The Raid” and “The Cutting of the Forest”.

In the Caucasus, Leo Tolstoy wrote the story "Childhood", which he published in the journal "Contemporary" under LN initials. Soon he wrote the sequels "Adolescence" and "Youth", combining the novella into a trilogy. The literary debut turned out to be brilliant and brought the first recognition to Leo Nikolaevich.

The creative biography of Leo Tolstoy was developing rapidly: the appointment to Bucharest, the transfer to Sevastopol, the command of the battery enriched the writer with impressions. Leo Nikolayevich wrote a series of "Sevastopol stories". The works of the young literary writer impressed critics with bold psychological analysis. Nikolai Chernyshevsky found in them "dialectic of the soul", and Emperor Alexander II read the essay "Sevastopol in December" and expressed admiration for Tolstoy's talent.

In winter of 1855, the 28-year-old Leo Tolstoy arrived in Petersburg and entered the Contemporary club, where he was welcomed, calling him "the great hope of Russian literature". But over a year, the writers' environment with its disputes and conflicts, readings and literary dinners bored him. Later Tolstoy wrote in “Confessions”:

In autumn of 1856 the young writer went to Yasnaya Polyana, and in January 1857 he went abroad. For six months Leo Tolstoy traveled around Europe. He visited Germany, Italy, France and Switzerland. He returned to Moscow, and from there - to Yasnaya Polyana. In the estate he began to build schools for village children. Twenty educational institutions appeared near Yasnaya Polyana thanks to him. In 1860, the writer traveled a lot: in Germany, Switzerland, Belgium. He studied the pedagogical systems of European countries in order to bring it to Russia.

A special niche in Leo Tolstoy's work is dedicated to fairy tales and compositions for children and teenagers. The writer created hundreds of works for young readers, for example kind fairy tales "Kitten", "Two Brothers", "Hedgehog and Hare", " Lion and Dog".

Leo Tolstoy wrote a school book "Azbuka" for teaching children to write, read and arithmetic. Literary and pedagogical work consists of four books. The writer included fairy tales, bylines, fables, as well as methodological advice for teachers. In the third book there was a story "The Prisoner of the Caucasus."

In 1870 Leo Tolstoy, continuing to teach village children, wrote the novel "Anna Karenina", in which he contrasted two plot lines: the Karenin family drama and the home idyll of the young landowner Levin, with whom he identified himself. The novel only at first glance seemed a love story: the classicist raised the problem of the reason of the existence of an "educated class," opposing him to the truth of village people life. Fedor Dostoyevsky highly appreciated Anna Karenina.

A turning point in the writer's mind was reflected in his works written in 1880s. Spiritual insight, which changed his life, is a heart of his stories and novels. He wrote "The Death of Ivan Ilyich", "Kreutzer Sonata", "Father Sergius" and the story "After the Ball." The classicist of Russian literature shows in his works social inequality and his hatred for the nobility.

In search of an answer to the question of the meaning of life, Leo Tolstoy turned to the Russian Orthodox Church, but there he found no satisfaction either. The writer understood that the Christian church is corrupt, and under the guise of religion priests promote false knowledge. In 1883, Leo Nikolayevich founded the "Mediator" journal, where he expressed his spiritual beliefs with criticism of the Russian Orthodox Church. Tolstoy was excommunicated for this; the secret police watched the writer.

In 1898, Leo Tolstoy wrote the novel "Resurrection", which received good reviews of critics. But the success of the work was nothing to "Anna Karenina" and "War and Peace."

The last 30 years of his life, Leo Tolstoy, with the doctrine of nonviolent resistance to evil, was recognized as the spiritual and religious leader of Russia.

Leo Tolstoy did not like his novel War and Peace, calling the epic as “rubbish". The writer wrote it work in 1860s, living with his family in Yasnaya Polyana. The first two chapters, entitled "1805", were published the "Russian Herald" in 1865. Three years later, Leo Tolstoy wrote three more chapters and completed the novel, which provoked critics’ debates.

The characters of the heroes were written during the years of family happiness and spiritual development. Princess Marya Bolkonskaya recognized the features of Lev Nikolaevich's mother, her love for reflection, brilliant education and her love of art. The features of his father, humor, love of reading and hunting, the writer gave to Nicholai Rostov.

When writing the novel, Leo Tolstoy worked in the archives, studied Tolstoy’s and Volkonsky's correspondence, Masonic manuscripts, and visited the Borodino field. His young wife helped him, rewriting his drafts.

The readers couldn’t stop reading the novel. It impressed readers with the breadth of the epic canvas and nuanced psychological analysis. Leo Tolstoy characterized the work as an attempt to "write the history of the people."

According to the literary critic Lev Anninsky, by the end of 1970 the works of the Russian classicist were screened abroad 40 times. Until 1980, the epic "War and Peace" was shot four times. Directors of Europe, America and Russia have shot 16 films based on the novel "Anna Karenina", "Resurrection" is filmed 22 times.

For the first time War and Peace was screened by director Petr Chardynin in 1913. The most famous is the film, shot by Soviet director Sergei Bondarchuk in 1965.

Leo Tolstoy married 18-year-old Sophia Berts in 1862, when he turned 34 years old. The count lived with his wife for 48 years, but the life of the couple can hardly be called cloudless.

Sophia Bers is the second of three daughters of Andrei Bers, the doctor of the Moscow Palace Bureau. The family lived in the capital, but spent the summer in a Tula estate near Yasnaya Polyana. For the first time Leo Tolstoy saw his future wife in childhood. Sophia received a home education, read a lot, studied art and graduated from Moscow University. The diary of Bers-Tolstaya, is recognized as a model of the memoir genre.

At the beginning of their life together Leo Tolstoy, wishing that between him and his wife there were no secrets, gave Sophia to read his diary. The wife found a lot of information about the stormy youth of her husband, her enthusiasm for gambling, the wild life and the village girl Aksinya, who was expecting a child from Leo Nikolayevich.

Their first child Sergei was born in 1863. In early 1860's Tolstoy decided to write the novel "War and Peace". Sophia Andreevna helped her husband, despite the pregnancy. The woman taught and brought up her children at home. Five out of 13 children died in infancy or early childhood.

Problems in the family began after the end of Lev Tolstoy's work on Anna Karenina. The writer was plunged into depression, expressed dissatisfaction with his life, which Sophia Andreevna so diligently created. Moral thoughts of the writer resulted the fact that Lev Nikolaevich demanded from his relatives to give up meat, alcohol and smoking. Tolstoy forced his wife and children to dress in peasant clothes, which he made himself, and wished to give the property to the peasants.

Sophia Andreevna made great efforts to persuade her husband from the idea of giving the property to people. But the quarrel that broke out split the family: Leo Tolstoy left home. Returning, the writer entrusted to rewrite drafts for daughters.

The death of the child - seven year old Vanya - briefly brought the couple together. But soon mutual disagreements and misunderstandings resulted their breakup. Sophia Andreevna found happiness in music. In Moscow, the woman took lessons from a teacher, to whom she had romantic feelings. Their relationship remained friendly, but the count did not forgive his wife for this.

A fatal quarrel between the spouses happened in late October 1910. Leo Tolstoy left the house, leaving Sophia a farewell letter. He wrote that he loved her, but could not live with her.

82-year-old Leo Tolstoy, accompanied by personal doctor D.P. Makovitsky left Yasnaya Polyana. On his way the writer got sick and got off the train at the Astapovo railway station. The last 7 days of his life Leo Nikolayevich spent in the house of the station warden. The whole country was following the news about Tolstoy's health.

Children and wife came to Astapovo station, but Leo Tolstoy did not want to see anyone. He died on November 7, 1910: he died of pneumonia. The wife lived 9 more years. Tolstoy is buried in Yasnaya Polyana.

• Everyone wants to change humanity, but no one thinks about how to change themselves.

• Everything comes to those who can wait.

• All happy families are alike, each unhappy family is unhappy in its own way.

• Let everyone sweep before his door. If everyone does this, the whole street will be clean.

• It is easier to live without love. But without it, there is no sence.

• The world is moving forward because of those who suffer.

• The greatest truths are the simplest.

• Everyone is making plans, and no one knows if he will live until tonight. 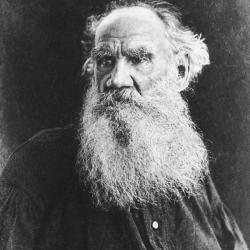