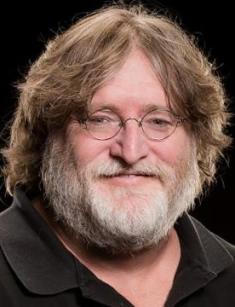 Gabe Newell is an American programmer, billionaire, and the founder of Valve that produces computer games. The developer’s projects include popular game platforms, such as Half-Life, Steam, and so on.

Gabe Logan Newell was born in November 1962 in Colorado. The man avoids giving any information about his parents to journalists.

According to the entrepreneur, he started creating computer games at 13; he used the ALGOL language.

The hobby helped the young man enter Harvard University, but he quit his studies several years and got hired at Microsoft, which had just been founded by Bill Gates. It was the first step to the talented programmer’s success.

Creating computer hard- and software captivated Newell; he contributed to the first three versions of Windows. At some point, Gabe and other fist shareholders of Microsoft increased their fortunes up to several million. This money was useful later. Apart from computer equipment, the programmer was fond of game console creation; the examples of Doom and Super Mario 64 proved it was a promising direction.

13 years after working for Microsoft, Newell and his colleague Mike Harrington founded their own company producing computer games. It happened soon after one of Microsoft employees, Michael Abrash, left the company for id Software, the producer of the Quake console.

In 1996, Gabe and Mike’s firm Valve took up the first project, the Half-Life platform; they invested their own finances. The game is set in secret CIA laboratories and immediately found its audience: two million copies were sold in the first months.

Corporate rules of Valve were remarkably democratic, unlike those of Microsoft; Gabe and his partner created the structure without departments, bosses, managers, and administrators. Employees were allowed to spend working time on personal business, like going to a café, gym, or spa salon. The model turned out to be effective: the company’s capitalization was growing and exceeded $1 billion soon.

Two years after the first success, Mike Harrington left Valve when the modification Half-Life-2 was being created; Newell purchased his stock. At the same time, Gabe started working on Steam, which proved to be one of the most popular game servers.

The key to the incredible success is simple: Gabe Newell is a great fan of computer games. Super Mario 64, Doom, Dota 2, and Star Trek are his favorite games; the man also fights enthusiastically in World of Warcraft. The spy from Team Fortress 2 is Newell’s favorite character.

The programmer believes that inventing a new product is art. Popular shooters, such as Counter-Strike, are based on the right compilation of piсtures. Gabe gladly invites unknown talented programmers in his company.

The next ten years were marked with two programs: Counter-Strike and Team Fortress Classic, as well as the hit games Portal and Left 4 Dead.

There is a legend about number three in the company: it originated from the fact that third versions of programs were not released. For instance, the work on the Half-Life 3 platform continued for many years but never came out. Thus, the creators of the fourth version changed the concept and introduced an entirely new character, the scientist’s son Freeman.

Thanks to the proper inner politics, Newell got to Forbes’s list of the most famous programmers in 2010. By 2012, Valve capitalization reached $2.5 billion; each of its 400 programmers received more profit than their colleagues from Google and Apple.

The entrepreneur’s fortune was about $1.3 billion at that time. Thus, Gabe became one of the wealthiest people in the world without higher education, just like his former boss Bill Gates. At the end of 2017, Newell owned $5.5 billion, which made him one of the top 100 richest people of the USA, according to Forbes.

The businessman’s popularity has increased thanks to his open communication with gamers. He talks to users of the Steam forum, creates new topics for discussion, and always answers letters.

The businessman’s personal life has also been happy. In 1996, he married a woman named Lisa in 1996; they have two children together.

Today, the owner of Valve, his wife, and sons live in Los Angeles, not far from Long Beach. Newell never uses social networks; fans of computer games share his photos on Instagram sometimes.

The man’s zest for life helped him overcome a disease: in the early 2000s, he had Fuchs dystrophy that could deprive him of sight. The 45-year-old programmer had surgery and fully recovered; now, his health condition is excellent.

Gabe collects bladed weapons; some of them decorate his office. He has more than 600 items, including Japanese swords wakizashi, tridents sai, and carved knives. Newell has created a workshop in his house and makes new blades with his own hands. Another unusual hobby is to watch the children’s series My Little Pony; the man also likes motor racing.

The businessman is involved in philanthropic work. He supports the charity championship The Heart of Racing and children’s heart clinic in Seattle. Newell used to donate money to the American Civil Liberties Union.

At the beginning of December 2016, the Yandex search engine gave information about Gabe Newell’s death. However, the official website of Valve and other reputable sources did not report anything like that. Programmers believed the news was the result of some computer mistake; several days later, the false information was deleted. The businessman took the search error calmly and did not even sue Yandex for it.

In 2017, Gabe participated in The International 2017 tournament; he collaborated with the TV presenter Kaci Aitchison and Jake “Sir Action Slacks” Kanner on the funny video, playing a guard. The announcement of the card game Artifact on the Dota 2 platform was made; it was released in November 2018.