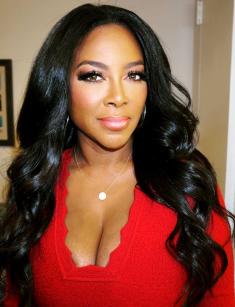 Kenya Summer Moore–Daly is an American model, actress, and TV personality. She gained recognition after her victory at the Miss USA contest in 1993. In 2012–2018, Kenya starred in The Real Housewives of Atlanta.

Kenya Moore–Daly was born in Detroit in 1971 to Patricia Moore and Ronald Grant who were teenagers at that moment and not ready to have a family. When Kenya was three years old, her mother left her and never talked to her daughter. However, it can be said that Moore as a child was rather happy: the young girl was raised by her father’s relatives, grandmother Doris Grant, and aunt.

Speaking about Moore’s education, she attended Cass Technical High School and Wayne State University, where she studied psychology and communication.

Kenya’s modeling career started when she was 14 years old. In 1992, she was on the cover of the magazine Ebony Man, and later she also began working with the Ebony Fashion Fair, hair care and cosmetic products.

At the age of 22, Moore won Miss Michigan USA and turned out to be the second African American woman who won this prize. Also that year, Kenya participated in the Miss Universe pageant as the representative of the United States and took the fifth place.

After these triumphs, Moore appeared in lots of television programs like Women & Dogs, Meet The Browns, The Fresh Prince of Bel-Air, etc. She also was on the covers of Ebony and Glamour magazines and in various music videos, for instance, in Jermaine Dupri's Money Ain't a Thang (1998). In 2007, Moore published her own book Game, Get Some! In 2013, she created a workout DVD named Kenya Moore: Booty Boot Camp.

Among Moore’s ex-boyfriends, there are sportsmen Allen Iverson and Mike Tyson. In 2017, Kenya married Marc Daly, a businessman. Next year, they announced that Moore was pregnant with their baby. On November 4, 2018, Brooklyn Doris Daly was born. The parents called their girl Brooklyn because they first met there, and Doris is after Kenya’s grandmother with whom they were close since Moore’s childhood. Recent news tells us that this year, Kenya is filing for divorce from her husband.