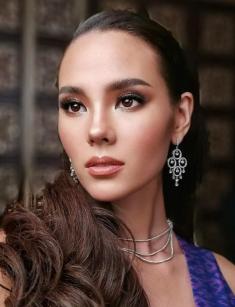 She is a model, singer, and visual artist who gained worldwide popularity as a contestant of beauty competitions. In 2018 she achieved heights winning the title Miss Universe 2018. The following year the model devoted to volunteering and charity. Besides, she has emerged in the creative world – she sings, paints scetches, and keeps her blog.

She was born in Australia in the second-largest state in Queensland. Her hometown is Cairns. Her father is Scottish, and her mother is Filipina. Her parents called the daughter in honor of her paternal and maternal grandmothers. Her paternal granny’s name is Catherine. She immigrated to Australia from Scotland in the middle of the XX century. Her maternal mother is Filipina, named Elsa.

At school, the model was a chorister and a house captain. Catriona received multi directed education. Thus she had a black belt in Choi Kwang-Do martial arts, master’s certificate in music theory, and outdoor recreation. Her talents allowed her to become a lead singer in the school jazz band and stare in local productions. In 1999 she became little miss Philippines.

In 2016 she participated in the beauty contest and won the title Miss World Philippines 2016. During the competition, she answered the question, “What do you see when you look at the mirror in the morning. The young contestant responded that she saw a person who tried to be better than the day before, tried to meet challenges. Catriona said that she was always happy when she looked at the mirror and realized that she made something good for the community.

When she was asked why she could be the winner of the beauty of the contest, Catriona said that to be Miss World meant to take the torch wich burnt with passion and purpose. If she won, the model was going to carry that torch and to set charitable causes alight.

After the victory of the national competition, she became a contestant of the international beauty contest.

Since the early years, the model works as a media personality and appears on TV in commercials as well as runway. She became a familiar face in adds and endorsements. One of the brightest projects with her participation is Pantene #WhipIt, where the model was battling gender stereotypes.

She is a constant face on the fashion events and related shows where she makes her signature walks. During beauty contests, she received full attention thanks to her so-called lava walk.

Since childhood, the model displayed interest in music, besides Catriona’s talent was proved by judges of numerous competitions in which she took part as well as her teachers. That’s why it is not a big surprise that the multitalented model decided to share her talent with the public. In 2018 she began the professional music career releasing her first single “We’re In This Together.”

Besides, at the beginning of 2019, she made her first TV appearance on the talk show “Live! With Kelly”. In December 2019, she passed the crown of the beauty queen to the other girl. During her final walk as the current beauty queen, she made heads turn when she appeared in the stunning apparel.

She hasn’t been married yet as well as wasn’t engaged. The model has got a romantic relationship with the model Clint Bondad. They met on the modeling project and soon became a couple. The model and her current boyfriend seem very happy, and probably it was up to him to become her future husband. However, there have been many rumors about her relationships with Jordan Bartlett in autumn 2019. The basketball player shared a photo with the beauty queen and signed it:

“Had dinner with Ms. Universe and friends! It was an honor to meet you, Catriona Gray, and thank you for listening to my lava walk story.”

The fans began suspecting the blossom romance. Nevertheless, they hadn’t confirmed rumors, and the picture was soon deleted.

Catriona had several hobbies, painting, sketching, singing, cooking, photography. She can play the guitar and goes in for sport. Her favorite actor is Tom Cruise. At school, she liked to attend lessons in Maths, English, and Art. Her favorite musical is Miss Saigon.

The model supported the Nomakeup campaign in 2019, after which she challenged Pia Wurtzbach.

The young lady is well-known for her charity work. Catriona collaborated with several charitable organizations and volunteered as a teaching assistant in the organization, which provides education to non-privileged children.

She founded her organization thanks to her concert and selling of artworks.

Her net worth is estimated at $2 million.