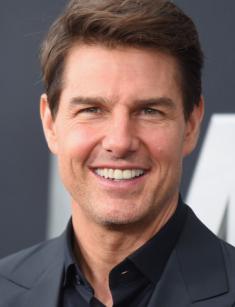 Tom Cruise is an American actor, director, screenwriter and producer. He is one of the most famous and beautiful representatives of American cinema, the example of the "dream factory".

Thomas Cruise Mapother IV was born on July 3, 1962 in Syracuse (New York, USA). The future actor grew up in a large family (there were four children), he was the third child and the only boy. Tom's father is an engineer, but his career was unsuccessful. Because of problems with employment, the family often moved from one city to another. Tom's mother was an actress.

When the boy was twelve, his father left the family. After that, it became even harder to live: the children had to earn extra money during their free time to help their mother a little bit.

At school, it was not easy time for the boy; he had a rare disease - dyslexia (incorrect perception of written text). His mother also had it and all children in the family suffered from the disease. At school, Tom was not a good student, he was even sent to a special group, but the boy managed to cope with the problem and returned to the regular class.

But this is not the only thing that bothered the guy, he also suffered because of his low growth (now Cruz's growth is 170 cm). Therefore, in school years, Tom talked with the guys who were lower than him, in order to seem higher. In order to be few centimeters higher, the guy was involved in sports and achieved quite good successes in the fight. Cruise planned to become a professional athlete, but because of a knee injury, the young man could not build a sports career.

The dream of acting appeared when Cruise was sixteen years old. For the first time he played on stage in the musical "Guys and Dolls". Before that, Tom had other plans - he entered and studied for a year in the theological seminary, but changed his mind and went to New York to build an acting career. Cruise had a goal - to become famous in ten years.

In 1980, the future actor moved to New York, and the first thing he did was cutting his name, now he was just Tom Cruise. The guy attended all castings. A year after coming to the big city, the beginning actor was noticed and invited to the role of Billy in the film "Endless Love". Then there were some more film with episodic roles. But his first main role Cruise got in 1983 in the blockbuster "Risky business", this film collected $ 65 million at the box office - it was a real success for the actor.

But the status of the Hollywood superstar Cruise got after the film "Top Gun". Later, the actor starred in a fairly successful project "Color of Money" and "Rain Man." For participation in the film "Born on the Fourth of July," Cruise was awarded the "Golden Globe" and nominated for Oscar.

Tom had many successful roles, but the peak of his career is the movie "Mission Impossible." It is interesting that in this film Cruise not only played the main role, but also acted as a producer of the action movie. Also, the bright role that brought the actor millions of new fans is the role of the vampire Lestat in the famous film " Interview with the Vampire: The Vampire Chronicles."

In 1996, the actor received another Golden Globe, and was also nominated for Oscar for Best Actor in the film “Jerry Maguire” for the second time. Four years later, the "Mission Impossible 2" comes out on the big screen. The film received not only spectator, but also financial success, having collected 550 million dollars.

In 2001, Cruz starred in the fantastic drama "Vanilla Sky", for which he received the Saturn Award for Best Actor. In subsequent years, the actor was working in such famous films as "The Last Samurai", "Collateral", "War of the Worlds", "Valkyrie" and others.

In 2010, the film "Knight and Day" was released. The picture becomes very popular not only in the US, and Tom Cruise's partner in this film was the famous actress Cameron Diaz.

In 2011, Tom appeared in the third part of "Mission Impossible: Ghost Protocol". In future, the directors will invite him to participate in the next parts of the popular film.

In 2010, the fantastic action film "Oblivion” with his participation appeared on the screens. The film immediately won the sympathy of the audience. Critics gave positive reviews to the film, and a remarkable cast included Hollywood such celebrities as Olga Kurylenko, Andrea Raisboro and Morgan Freeman.

In 2014, the American film actor continued to star in fantasy feature films, which became his business card. The film "Edge of Tomorrow" was released, in which the main partner of Tom Cruise was the British actress Emily Blunt.

In the new film there is a unique struggle of people for survival against representatives of alien civilizations. Events are shown in the near future, when a race of aliens mimikans attacked the Earth, destroying big cities and killing millions of people. The armies of all states struggled for existence and participated in the last battle against aliens. At the cost of incredible efforts, the main characters saved the planet.

The film got positives reviews from critics, and the fans also liked the film, and hoped the filmmakers make a continuation on the fantastic action movie.

The actor is an open follower of the Scientology Church, this direction was introduced to him by Mimi Rogers his first wife in 1990. Tom actively participates in various programs and strongly supports Scientology and its recognition in Europe. As the actor noted in the interview, it helped him completely recover from dyslexia.

After terrorist attacks on September 11, 2001, Cruise was a co-founder and financial sponsor of the "Purification" program. Thanks to Tom, 800 firefighters and liquidators were able to get treatment at the Downtown Medical clinic. For this, the head of the Scientology Church David Mickiewicz awarded Cruise with the Freedom Medal.

The Scientologist leader and actor began to communicate less because of Tom's relations with the Australian actress Nicole Kidman, whose father was a psychologist. Surely it was he who influenced the religious views of his son-in-law. But after their broke up, which happened not without the influence of Scientologists, Cruise once again established friendly relations with Mickiewicz. In 2004, in an interview, the actor admitted that he was against psychiatry, considering it a Nazi one. In his opinion, this science should be banned.

Fans of the actor are looking forward to his appearance in new films. In 2016, the feature film "Jack Reacher: Never Go Back." Many people are sure that the actor will continue to appear in action movies, as well as in films of a fantasy genre. In particular, at the moment the film "Mummy" will be released in June 2017.

In February 2017, a video appeared on YouTube, in which the image of the falling character Tom Cruise from the picture "Vanilla Sky" is inserted into other feature films. The video with the Hollywood from already well-known fiction has collected over 330 thousand views. Many users immediately assumed that the video appeared for certain reason. And in the near future the actor will again take part in a fantasy action movie.

Tom Cruise didn’t not refuse to participate in the American detective movie "Mission Impossible." In 2018, the premiere of the sixth part of the film is planned.

The world community has always been interested in the personal life of one of Hollywood's most popular actors. The constant attention of journalists followed the actor for decades. Representatives of various world tabloids always try to follow the Hollywood star.

Tom Cruise was married three times. With his first wife, the actress Mimi Rogers, the actor lived for three years (since 1987). Their marriage was considered happy, but as a result, the couple broke up, because of the fact that Cruise refused to move to Los Angeles. There are no children from the first marriage.

In 1990, the actor meets his second wife, the actress Nicole Kidman. The couple met on the set of "Days of Thunder". Lovers got married in the same year, after Christmas holidays. The Kidman-Cruise couple was considered to be the strongest; the actors lived in marriage for 11 years and adopted two children.

In 1999, the couple starred in Stanley Kubrick's thriller "Eyes Wide Shut." Kidman and Cruise played a family couple who could not solve their problems. Two years later the most beautiful couple of Hollywood filed for divorce. The official reason for the separation was the employment of the spouses. During the divorce, Kidman got 10 million dollars from Cruise.

In 2001, Tom began relations with the famous actress Penelope Cruise, they worked together on the film "Vanilla Sky." The lovers did not get married, after a couple of years the couple broke up. It is assumed that one of the reasons was the jealousy of Penelope to the former wife of the actor.

A year later Tom meets his third wife Katie Holmes. Their beautiful relations were discussed and covered by all tabloids. Cruise made a proposal to the girl six months after the birth of their daughter Suri. The offer of the hand and heart was made in Paris. Tom gave Katie a beautiful ring with a diamond. About their engagement, the couple officially announced to the whole America at the Oprah Winfrey show. The wedding was played in 2006 in Italy.

Star couple lived in marriage for six years, and in August 2012 Holmes and Cruise officially divorced. But, despite this, Tom is not going to leave his daughter, the actor is very fond of children and has long dreamed of a big family. They say that the reason for the divorce was again the religion of Cruise and his views.

American journalist Andrew Morton released in 2007 a biography of the actor, in which he called Cruise as a member of the sect. In addition, he wrote that Suri is not Tom's own daughter, and allegedly the girl was conceived with the help of special reproductive technology. Naturally, the actor completely refused this information, and also sued the author of the biography. The information is really absurd and untrue; the girl is very similar to Cruise. Just look at their photo and everything will become clear.

The personal life of Tom Cruise continues to interest fans. Already in 2015, the American media reported that his girlfriend was Emily Thomas, the personal assistant of the movie star. The girl became an assistant of the Hollywood actor during the film "Mission Impossible: Rogue Nation." In Instagram and other social networks, Cruz fans continue to be interested in his personal life.

• War of the Worlds 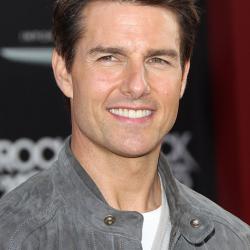