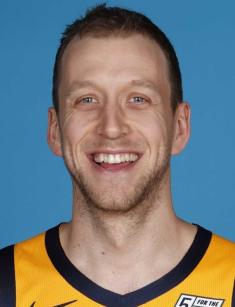 Joe Ingles is an Australian basketball player performing for the Utah Jazz and the national team. The athlete can take several positions but usually focuses on the small forward’s and shooting guard’s jobs.

The future sports star was born on October 2, 1987, in a suburban area of Adelaide, Australia. He grew up with an older sister, Megan. They are very close today, and the athlete shares their childhood pictures on Instagram.

The parents, Lynne and Tim Ingles, encouraged their son’s interest in basketball and soccer. Ingles went to Lake Ginninderra College and also the Australian Institute of Sport, which made him a desirable player for many teams. Although the young man wanted to join the Adelaide 36ers, he reconsidered it later, when the club administration misspelled his name in documents.

In 2006, the South Dragons selected the 18-year-old talent during the draft. The newbie immediately established the alpha and became the top-scoring results among rookies: his 29 points in the first game were beyond any fantasy.

The skillful athlete did not spend much time on a bench and kept bringing his club new points. However, the team went bankrupt one day, and Ingles had to find a new home. In 2009, he joined the CB Granada, Spain; there was also a period of collaboration with the Maccabi Tel Aviv.

In 2014, the Utah Jazz bought Joseph and put him to their matches at once. Although the beginning was not very good, Ingles adjusted soon and became one of the leaders in the club, along with Donovan Mitchell and Bojan Bogdanović.

Ingles’s essential achievements made him a perfect candidate for the Olympic Games. The expectations came true in 2008 when the athlete went to Beijing. Although his national team lost to the United States with the score 116-85 in the final, Joe gave all he had to the game and brought eleven points to Australia.

Further on, Ingles took part in the 2010 FIBA World Championship and the Olympic Games in London in 2012. The latter event was spectacular again, and only Joe’s colleague Patty Mills surpassed him in scores. In 2014, fans enjoyed their favorite’s assists and rebounds during the FIBA Basketball World Cup.

Joseph is a happy husband and father of two. He married his wife, the professional netballer Renae Ingles, in 2015; the twins Jacob and Milla were born the next year.

In February 2019, the sportsman revealed that his son had autism; he is undergoing a therapy now.

2019 brought mixed results to Ingles: his team faced both victories and losses. Overall, his personal career stats were good; the athlete decided to extend the current contract for a year and postpone being a free agent. His defensive rating is #24 in the NBA’s Defensive Win Shares.