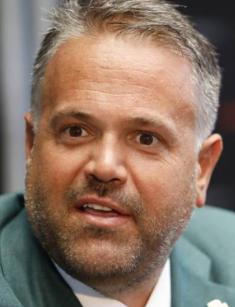 Matt Rhule is a popular football coach. At present, Matt is the head coach of the Carolina Panthers of the NFL. Before that, he was coached at Baylor University and Temple University.

Speaking of the sportsman's background, Matt was born in New York City. When he was a teenager, his family moved to State College, Pennsylvania. The young boy joined the team at State College Area High School before walking on as a linebacker to Penn State. At Penn State, Rhule played four years under Joe Paterno and was a three-time Penn State Scholar-Athlete and an Academic All-Big Ten honoree in 1997. Matt got an education at Penn State, after getting his Bachelor's of Arts in Political Science. In 2003, the sportsman studied Educational Psychology and got a Master's from the University at Buffalo.

Denny Rhule, Matt's dad, who was also a Nazarene minister, had taught his son many important lessons. His father always told Matt that the most comfortable route isn’t always the best one to take and Matt always listened to him. Denny was also a longtime coach for a variety of sports at high schools, including football, baseball, basketball, soccer, and softball. According to Matt's father, he advised him not to be safe and to not always choose jobs or positions and where they live based on just being comfortable. From a young age, Matt had learned to take challenges. Denny is always at Matt's side for moral and spiritual support, for every practice and game. Matt said he is proud to have such a wise and experienced person.

Matt's career started with college. After playing in teams, the sportsman receiver an offer to coach for Albright College. Matt agreed and had worked there for one year. In 2006 he was offered to be a defensive line coach at Temple. Next year, Matt switched to quarterbacks coach before being named Temple's offensive coordinator in 2008.

In 2015, Matt signed a four-year contract extension with Temple. According to this contract, he was going to work until the 2021 season. But then it was decided to keep Matt at the university. Eventually, Rhule chose to remain at Temple.

The sportsman will never forget September 2015 when he defeated his alma mater, Penn State.

During his coaching career at Temple, Matt's team had shown great results, winning the American's East Division. The team took part in the conference's inaugural championship game. The next season, Matt's team won their first conference championship since 1967.

In 2016, the sportsman became the head football coach at Baylor University. Matt replaced interim head coach Jim Grobe. Rhule managed to lead the team to high scores after the Bears finished the 2017 season with a low record. In the 2018 regular season, Baylor showed excellent results and received an invite to the 2018 Texas Bowl.

Rhule's contributions were great, as the Baylor Bears, under his leadership, finished the 2019 regular season at 11-1. Speaking of his Baylor salary, according to the USA Today coaches salary database, Rhule made $4.11 million in guaranteed compensation in 2019 at Baylor. That means, at the low end, he would more than double his salary by jumping to the NFL.

Matt had worked six years as an assistant at Temple. In 2012, he joined Tom Coughlin's New York Giants as the assistant offensive line coach.

In January 2020, Rhule signed a contract and became the sixth head coach of the Carolina Panthers. Matt had an early question from the Giants about the head-coaching vacancy: the team was eager to know what would the makeup of his coaching staff look like, starting with the coordinators. Whoever takes over the Giants offense was tasked with the continued development of quarterback Daniel Jones.

Joe Judge came from behind to win the race to become the next head coach of the New York Giants – in perhaps a quicker resolution than many expected. There was a lot of talk about how the Giants should interview Matt Rhule and consider him as one of the top options for their head coaching job, but that didn’t materialize according to what Rhule has said about taking the Carolina job. Matt's agent handled the talks with the Giants, who were set to interview Rhule in addition to the Panthers. But the Giants chose not to fight for Rhule and instead went with Joe Judge, who had impressed the front office in his own interview.

Rhule is known to have a longtime working relationship with Phil Snow. When Rhule was hired as head coach at Temple in 2013, he brought in Snow to run his defense. In 2017, when Matt was hired at Baylor, he again brought in Snow to run his defense. It is expected that Rhule would want Snow to run or at least play a major role in his defense with the Giants. Snow has never run defense in the NFL. He spent four years with the Detroit Lions, serving as a defensive assistant in 2005 and coaching linebackers for the next three years. The Giants already interviewed Kris Richard for their head coaching job and the charismatic Richard could be a consideration as defensive coordinator. He was the defensive passing game coordinator for the Cowboys and, before that, was the defensive backs coach in Seattle for the famed Legion of Boom secondary.

The first question Matt Rhule was asked during his first press conference with the Panthers was about quarterback Cam Newton. Matt didn't rule out having Cam Newton as his quarterback in 2020. When the coach was asked specifically if Newton was in Carolina's future plans, Rhule said he was looking forward to working with him, saying that Cam is a tremendous player.

Matt is married to Julie Rhule. She is the loving and supportive wife of NFL football coach. It's known that Julie was born Julie Nibert. She is a registered dietitian with Sodexo and works at Temple with its students. She is far more than just the coach’s wife, and they are like partners. Likewise, she played a role in Matt’s decision to join the Carolina Panthers’ sixth head coach. As Matt was chatting with the Panthers, Julie was listening to the conversation and later pursued him to join Panthers in their moment alone. Julie has proved to be providing great suggestions to her husband on his coaching career. It was reported that Julie Rhule lost her mother after a long and courageous battle with breast cancer in 2013.

Matt and Julie are proud parents of three children: son, Bryant; and daughters, Vivienne and Leona.

The famous coach has a net worth estimated at $50 Million. His salary amounts to $8.86 million per year.