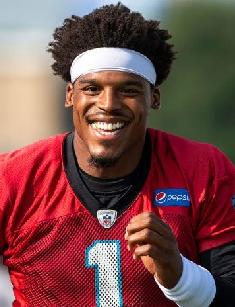 The Georgia native, Cameron Jerrell Newton started a football career in NFL in 2011, as a rookie of Carolina Panthers. He was a National champion at Auburn, drafted at number one, and became the best rookie of the league in 2011. Newton has won a lot of various NFL awards and set several records. He played at a quarterback position.

Cam has three children. Cam Newton’s salary is $5.5 million per year thanks to his four-year contract with the Carolina Panthers. Currently, his net worth is roughly estimated at $45 million.

Born on 11 May 1989, Cameron became the second child in the family of Jackie and Cecil. They lived in Atlanta. His parents and elder brother were strongly involved in sport. Cecil even tried to get into NFL in 1983 and 1984. Newton’s parents started to enthrall Cam with physical activities from an early age. Cam was good in baseball; however, he soon started to develop his football skills.

Cameron decided to enter high school based on football. He chose Westlake High School. Soon, Cam became a member of the school’s football team. His then-coach immediately noticed that Cam had the makings of a great pro-athlete. Apart from a lot of kids, Cam had natural talent. It didn't take him long to catch on, and it didn't take him long to excel. So, in his senior year, Newton received several scholarship offers.

Newton enrolled at the University of Florida. In 2007-2008, he was playing for the Florida Gators. He spent one good season and missed the next because of his ankle injury. In 2008 Cameron was accused of stealing a laptop and was suspended from the team. Later he found guilty and moved to Texas, where he entered Blinn College.

In 2009 he won NJCAA National Football Championship. Cam was recognized as the best quarterback among students. In 2010 Cameron led the football team of Auburn University in Alabama to the BCS National Championship. He showed outstanding game, set several records, received various head-to-head awards, and went on 2011 NFL Draft. Just watch the video called Cam Newton - 2010-11 Highlights – All the Above, and you’ll understand why he took the first overall pick on it.

Newton became the number one on 2011 Draft. He was selected by Carolina Panthers and signed a four-year contract on $22 million. In his debut NFL game, Cam started to set rookie’s records. He collected 422 passing yards. Cameron demonstrated his talent in every game, breaking down all previous achievements.

Until he came along, Michael Vick stats allowed him to be considered the best rushing quarterback in NFL history. Then Newton began to claim that title and took the Rookie of The Year Award in 2011. Also, he was recognized as the best offensive rookie. In 2012-2015 Newton made his name and became one of the best quarterbacks in the history of NFL.

Since 2015 Cam Newton was often compared to Atlanta’s quarterback Matt Ryan. Both the players set a lot of records. They were compared in percent of their passes, their speed, amount of yards, salaries, and so on. However, Cam could prove his superiority, leading his team to Super Bowl 50 and getting the MVP award. Then the Panthers lost to the Broncos.

In after game interview MVP settled into his uncomfortable chair, arms at his side with the hood of his sweatshirt swooped over his head. The coaches were trying to get his attention. Newton did not abide. Newton was also probably not looking. This was painful, and he wanted it to end quickly. He answered some words to the journalists’ questions and left the room.

Cam Newton has been setting records since his rookie season, and in October 2018 he claimed one more. Trailing by 17 points entering the fourth quarter, Newton led Carolina to a 21-17 victory over the defending Super Bowl champions on three consecutive possessions. Not only did it tie the biggest deficit for a win in franchise history, but it was the largest ever fourth-quarter comeback for Carolina.

In 2018 Cam’s former teammate, Kelvin Benjamin wasn't holding back about his decline on the field and placed the blame on the Panthers, specifically quarterback Cam Newton. He said:

"I would've been even more successful if I had never gone to Carolina. Truly, I just think Carolina was bad for me. If you would've put me with any other quarterback, let's be real, you know what I'm saying? Any other accurate quarterback like Rodgers or Eli Manning or Big Ben - anybody! - quarterbacks with knowledge that know how to place a ball and give you a better chance to catch the ball."

In 2019 Chris Hogan joined Cam in Panthers. Chris got a chance to look at his old quarterback, Tom Brady, and his new quarterback, Cam Newton. Hogan told that Newton and Brady were totally different players. Brady was all business. Newton was more playful, running around the field with celebrations and energy.

Cam Newton is romantically involved with Kia Proctor. They started dating in 2013. However, Kia has not become Cam’s wife. They already have three children: sons Chosen Sebastian (3 years old), and Camidas Swain (11 months old), and daughter Sovereign Dior Cambella (2 years old). In May 2019, Proctor claimed on her Instagram that she was pregnant again.

In 2015 Cam Newton made a sexist remark at his press conference, when he said, “It’s funny to hear a female talk about routes”. After his controversial comments, Dannon released a strong statement saying they would no longer work with the Panthers quarterback, who had been a spokesperson for the company since 2015. Dannon Yogurt stopped working with Newton, and reportedly signed Dak Prescott to slide in on the company's spokesperson depth chart.

In 2012 Cam Newton opened his own foundation. It served as his charitable platform and supported strategic initiatives, programs, and events in the Charlotte and Atlanta communities. In June 2019, the Foundation has had the camp in the 9-1-2. Cam has hosted the camp in Alabama, as he went to Auburn for college, in the Carolina’s and Atlanta where he grew up, but this was the first time it’s been in the Coastal Empire where his mom grew up, and his dad played football at Savannah State.

In 2016 Newton started suffering from an injury of his throwing shoulder. It loomed over Panthers’ season last three years. In 2018 he had issues with strength and range of motion, and that ice, anti-inflammatories, acupuncture, and massages were not helping his progress. Then he said:

Cam is 30 years old, and his permanent injuries can be a problem when renewing a contract. In June 2019, Cameron Newton was still in recovery.