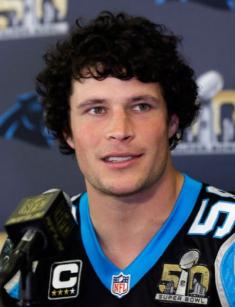 Luke Kuechly is a retired football player from the United States; he became famous as one of the most prominent linebackers. He spent seven years with the Carolina Panthers and won multiple prizes and titles.

The future football celebrity was born in Cincinnati into the family of Tom and Eileen Kuechly. Soon after the parents welcomed the child, they moved to Evendale. Luke went to St. Xavier High School and took an interest in sports, especially football; his early stats were good and helped the school team receive several prestigious titles across the country.

After graduation, Kuechly entered Boston College in 2009 and joined its football team at once. The Eagles’ coach decided to let the rookie play as a starting linebacker, and the decision was right: the young man not only gained the necessary experience but also showed impressive results, particularly, 158 tackles.

The next seasons were even more successful: Kuechly broke several records and boasted 21 games in a row with more than ten tackles in his second year. By the end of his college career, Luke turned into a valuable and efficient player so that many teams were eager to sign a contract with him.

In 2012, the athlete decided to participate in a draft after his third year in college. The Carolina Panthers selected him during the first round, and Luke turned over a new leaf in his career.

The debut was marked with a change of the position: the middle linebacker performed the functions of an OLB for a while but was allowed to return to his usual job soon. It did not prevent Kuechly from shining: he demonstrated excellent results in his rookie season and won the Defensive Player of the Year in 2013.

2015 brought the first Superbowl appearance. Luke’s ten tackles and a sack could not lead the Panthers to the victory, and the Denver Broncos surpassed them. Nevertheless, the athlete continued to get many individual and team titles until the beginning of 2020.

Kuechly became one of the central figures in his team. The tight end Greg Olsen is his best friend.

The athlete is happily married: his wife’s name is Shannon Reilly, and everybody in her family loves football. She became Luke’s girlfriend in 2012. Shannon studied biology at a college; the woman is fond of sport and used to play lacrosse and field hockey.

Kuechly is an active philanthropist. In 2018, he helped raise more than $300 000 for state non-profit organizations along with his Panthers colleagues.

In January 2020, a sudden announcement surprised fans: Kuechly retired from the sport. The sportsman has had many health issues, including several concussions; such a background made physical activities challenging for him. Another football player, Andrew Luck, also announced his retirement in this period.