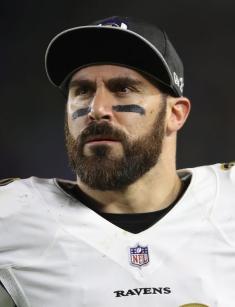 Eric Weddle is a famous American sportsman. He plays football as a free safety for the Los Angeles Rams of the National Football League. Eric is a proficient player who has been named to the Pro Bowl six times and has been honored as an All-Pro five times. Here is his story of success.

Weddle was born in Fontana, California. The future football star grew up in Alta Loma. According to the information, he has no brothers but has one sister. Eric often remembers his parents because they were a great inspiration for him. He is very thankful for their contribution to his life.

The sportsman got an education at a local High School. He played several sports: football, basketball, and baseball. He had many achievements in football: Eric was a three-time all-league selection and a two-time All-CIF selection. Although, no doubts, he was talented in all three sports.

As a senior, Weddle was named the team's best receiver and most valuable player. He led Alta Loma High to the 2000 Mt. Baldy League championship.

Weddle has been studying in the University of Utah, where he played for the Utah Utes football team, from 2003 to 2006. He was immediately put into action in 2003, starting his last nine games at right cornerback. Eric earned Freshman All-American first-team and All-Mountain West Conference honorable mention. In 2004, Weddle shifted to strong safety, starting eleven games.

In 2006, the athlete was a consensus All-American and unanimous All-MWC first-team choice. He was again named the conference's Defensive Player of the Year. He started the team's first two games at strong safety before shifting to left cornerback and closed out the season as the nickel back.

At the end of his senior year, the player was praised by Doug Robinson of the Deseret Morning News. Robinson expressed his respect to the sportsman, saying how valuable Eric was to the Utah Utes.

The San Diego Chargers selected Eric in the second round of the 2007 NFL Draft. He was the fifth safety drafted in 2007.

In March, 2016,Weddle had a four-year contract with the Baltimore Raven. The player was also considered as a possible free-agent target for the Eagles. He was a top safety in the NFL, but possibly he was too expensive for the team. Head coach John Harbaugh officially named Eric the starting strong safety to begin the regular season, alongside free safety Lardarius Webb.

In September, 2016, Eric recorded six combined tackles, a pass deflection, and intercepted a pass by Josh McCown in a 25–20 victory at the Cleveland Browns. The interception marked his first pick as a member of the Ravens and became his 20th interception of his career. He finished the 2016 season with breakout results. Weddle earned an overall grade of 92.4 from Pro Football Focus, which was the highest among all qualified safeties in 2016.

In January, 2017, it was announced that he was selected to play in the 2017 Pro Bowl to replace safety Devin McCourty. Eric was voted by teammates to be a captain for the AFC.

In March, 2019, the sportsman signed a two-year contract with the Los Angeles Rams. In week 4 against the Tampa Bay Buccaneers, he recorded a team high 15 tackles and 2 passes defended in the 55-40 loss.

In September, 2019, Eric had a terrible injury. This incident spread very fast on the Internet with frightening photos. The sportsman was taken to the locker room during the game against the Carolina Panthers with blood gushing from a cut on his head and was evaluated for a concussion. It was his worst injury throughout his career.

In 2018, the gifted player with tremendous experience spoke about the sportsman Lamar Jackson who had had a rough game in the Baltimore Ravens’ loss to the Los Angeles Chargers in the Wild Card Round of the playoffs. Eric noted that he thinks the team is in good hands long term with Jackson under center. He called him "the future” of the team.

Weddle, who engaged himself in football since his academic years, had very high game stats. He plays in the jersey #32.

Eric has a big family. He is married to his wife, Chanel. She is his former high school girlfriend. Eric and Chanel are parents of three daughters and a son. The couple firstly lived around Ogden, Utah. They wanted to be close to Utah State University in Logan, where Chanel went to school and played soccer. At that time, Eric spent an hour each to go to the University of Utah, where he studied and played football.

The sportsman has many interests. He goes to the gym, plays golf and basketball. He also is an amateur of bowling. He liked to be with his family and go to movie nights.

The sportsman worked as a special education major at Utah. He helped tutor students with learning disabilities. He has also is a supporter in the community that was formed to help people with diseases.

On Instagram, there is a fan account of the player with over 30,000 followers. The sportsman prefers to use Twitter as a social media. In September, 2019, Eric Weddle had a conflict with Antonio Brown on Twitter. Eric is known to never be afraid to speak openly or share his opinion on various topics. So he decided to express his thoughts on the Antonio Brown’s fallout in the NFL. When Brown wasn't on an NFL team, Weddle made it clear that the league didn't need him. He got into a spat with Brown as the two players went at it with several tweet exchanges.

The current net worth of the player amounts to $13 million. His earnings come from being a football player. He remains one of the richest people among the sportsmen.