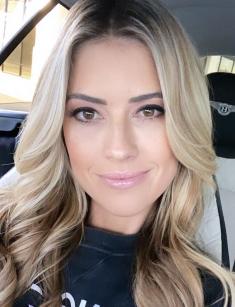 Raised in Anaheim, California, Christina Meursinge Hall (née Haack, formerly El Moussa and Anstead) is an American TV star and real estate investor. She was born on the 9th of July, 1983. Christina is of American nationality and white ethnicity. The faith she believes in is Christianity.

Christina is better known for starring in the Flip or Flop show that was run by HGTV. Currently, she has her show called Christina on the Coast, which was also created by HGTV. Christina is also quite popular on social media, especially on Instagram, where she has more than 1.8 million followers.

Christina spent her entire childhood in California. She was raised by her Catholic family in Anaheim. To be honest, not much is known about her family. All the information available is that Christina has a younger sister, Carly. The difference between their ages is ten years. She went to high school somewhere in southern California and then graduated from it with excellent MALS.

After completing her university education, Christina, along with her ex-husband, Tarek, whom she met in 2005, decided to create a real estate agency. The name of their business was "Tarek and Christina: The El Moussa Group". It was a successful business until the real estate industry was damaged in 2008 after the stock market crash. In 2010, they invested in a property in Santa Ana, CA. Until 2018, they worked not only in California but also in such states as Nevada and Arizona. Now, this agency is dissolved and belongs to Derek.

In 2011, Christina and Derek decided to try themselves in an audition for HGTV's future project. They asked their friend to help them record a tape. Fortunately, HGTV was interested in a collaboration and then offered to sign a contract. And in April of 2013, the first episode of Flip or Flop was shown on TV. As of 2022, Christina has her show, Christina on the Coast.

Throughout her career, Christina has appeared in many projects. Here are the most popular of them: