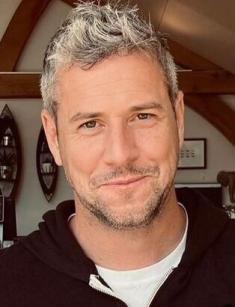 Ant Anstead is a British TV host, car builder, restoration expert, designer, writer, and artist. He is mostly famous for co-hosting such shows as For the Love of Cars and Wheeler Dealers. The star is known for being natural in front of the camera and participating only in those projects that he finds interesting.

Anthony, whose full name is Anthony Richard Anstead was born on March, 28, 1979 in Plymouth, England. There is little information about his family background or his early life. It's known that his family lived in Ely, Cambridgeshire until he was 10 years old. Then they moved to the county of Hertfordshire. The boy studied at Richard Hale School for a while and then attended a public school near Hertford. Anstead has an elder brother and two younger ones.

At the age of 18, he joined the police force and was stationed at Bishop's Stortford. In 2003, Anthony became a firearms officer in Welwyn Garden City. During his service, he was twice commended for bravery.

In 2005, Anstead left the police and decided to pursue his passion for car building and restoration. To start his business, he renovated a farmer's cow shed in return for one year's free rent. He restored vehicles, built bespoke cars and also made pieces of art for customers from all over the world. After achieving a certain level of success, Ant moved to a larger place and gathered a team of professionals. Due to his great reputation, he was noticed by TV networks.

After refusing to take part in several shows Anstead finally agreed to co-host For the Love of Cars in 2013. In 2014, he launched his own production company Angel 22 and produced his show The World's Most Expensive Cars.

Later, he appeared in a number of live shows. In 2015, Ant hosted Building Cars Live. He participated in various TV projects pertaining to engineering, art, and travel categories. In 2017, he became a co-host of Wheeler Dealers. He also published a book called "Cops and Robbers: The story of the British Police Car".

Ant and his ex-wife Louise Herbert have two children Amelie and Archie together. The couple divorced in 2017 after 12 years of marriage. Later the same year, he started dating Christina Haack, a real estate investor and TV star. They got married in late 2018. Their son Hudson was born in September 2019. A year later, Christina and Ant announced their divorce. According to various news sources, Ant filed for full custody of Hudson.

As of 2022, he is in a relationship with Renée Zellweger, a famous American actress.