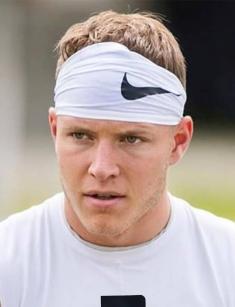 Christian McCaffrey is an American football running back who is best known for playing for the Carolina Panthers. He was born on June 7, 1996. Christian is of American nationality and white ethnicity. The faith he believes in is currently not known.

Christian was raised in Castle Rock, a city that is located in Colorado state. He's been playing for the Carolina Panthers since 2017.

Christian came from a family of football players. His dad, Ed McCaffrey, played collegiate football at Stanford and in the NFL, primarily for the Denver Broncos. Lisa Sime, his mom, was a soccer player at Stanford. Max, his older brother, was a wide receiver for many NFL teams after playing at Duke University. Dylan, his younger brother, is a quarterback at Northern Colorado. His younger brother, Luke, is a quarterback at Rice University.

Christian spent his childhood in Castle Rock, Colorado. There he went to high school, where he played football. After graduating, Christian enrolled at Stanford, where he also started playing soccer for the college's team.

With 3,864 all-purpose yards in a season, he owns the NCAA record. McCaffrey owns multiple NFL and Panthers team records and is one of just three players in NFL history to have 1,000 running yards and 1,000 receiving yards in the same season, which he accomplished in 2019.

His journey started when he began playing in a Stanford football team in 2014. He played there for three years until he started his professional football career. In 2017, he made his debut playing as a running back for the Panthers against the team from San Francisco. On April 16, 2020, McCaffrey became the highest-paid running back in NFL history when he agreed to a four-year, $64 million contract deal with the Panthers through the 2025 campaign.

In the ensuing three games, he amassed more than 100 yards from scrimmage. Due to an ankle injury sustained during the Panthers' Week 12 defeat to the Miami Dolphins, McCaffrey will miss the remainder of the season, the Panthers confirmed on November 29. In seven games, he collected 442 running yards, 343 receiving yards, and two touchdowns for the 2021 campaign.

Since 2019, McCaffrey has been dating Miss Universe 2012, model and fashion influencer Olivia Culpo. They are happy together for three years as of 2022.