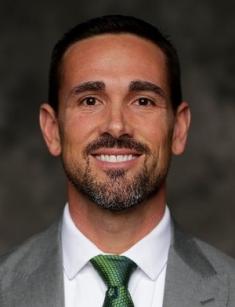 Matthew Patrick LaFleur, who is better known as just Matt LaFleur, is a Michigan-native football coach. He was born on November 3rd, 1979. Matthew is of American nationality and black ethnicity.

Matthew LaFleur is the American football head coach for the Green Bay Packers team in the NFL. He also worked as a quarterback coach for the Washington Commanders and Atlanta Falcons.

Matthew spent his entire childhood in his hometown, Mount Pleasant, which is located in Michigan state. He was raised by Denny and Kristi LaFleur. By the way, his dad, Denny, played as a linebacker and then became a football coach in Michigan. Kristi was a cheerleading coach. She also played tennis and basketball. Matthew's parents were a huge influence on his son, so he decided to become a football player in the future.

Matthew studied at a high school in Michigan and then, after graduating, enrolled at Western Michigan University in Kalamazoo.

Matthew started his coaching career in 2003 at his alma mater, Saginaw Valley State, as an offensive graduate assistant. During this time, he also filled in as a math substitute teacher in the neighborhood high schools. Matthew served as a quarterbacks and receivers coach for Northern Michigan University in Marquette in 2006.

The Houston Texans hired Matthew in 2008 to work as an offensive assistant. During his two years there, he helped quarterbacks and wide receivers alike, and he grew close to the offensive coordinator, Kyle Shanahan.

In 2010, Kyle Shanahan took Matthew to the city of Washington to work as the quarterbacks' coach after Shanahan's father was appointed by the Washington Redskins. From 2011 to 2013, LaFleur served as the head coach at Washington. LaFleur's main duty for the 2012 campaign was to coach rookie quarterbacks Kirk Cousins and Robert Griffin III.

Following six years of coaching in the NFL, Matthew returned to collegiate football as the quarterbacks' coach at the University of Notre Dame in 2014. Everett Golson, a senior quarterback, received coaching from Matthew and went on to throw for 3,445 yards and 29 touchdowns in one season, making him only the fourth quarterback in school history to accomplish so.

Matthew LaFleur made a comeback to the NFL on February 5, 2015, serving as the quarterbacks' coach for the Atlanta Falcons.

He coached Matt Ryan in 2016 as he earned his lone NFL MVP honor. The Falcons met the New England Patriots in Super Bowl LI, but they blew a big lead and lost 34-28 in overtime.

Matthew became the offensive coordinator for the Los Angeles Rams on February 8, 2017. The Rams ended the year under his leadership with an 11-5 record and the league's top-scoring offense after scoring 478 points in 16 games.

Matthew resigned from his position with the Rams on January 30, 2018, to accept the same role with the Tennessee Titans. He and the Titans had the NFL's 27th-ranked scoring offense at the end of the regular season.

On January 8, 2019, Matthew was appointed the Green Bay Packers head coach. Furthermore, Matthew guided the Packers to a 2-2 preseason record.

Matthew got married to his college sweetheart, BreAnne Maak, and they have two boys, Luke and Ty. Robert Saleh served as best man at Matthews' wedding after the two met as graduate assistants at Central Michigan.