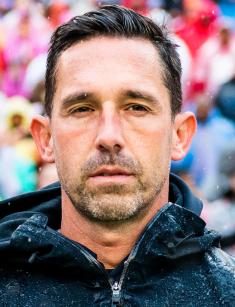 Kyle Shanahan, who was born on December 14th, 1979, is a Minnesota-born American former football player and sports coach. He also was an offensive coordinator for such teams as the Houston Texans, the Atlanta Falcons, the Washington Commanders, and others.

Since Kyle is Mike Shanahan's son, he was so close to football in his childhood. Kyle's hometown is Minneapolis, Minnesota. Because of his dad's career, the family moved to Saratoga, CA, where he studied at a public high school. Then they moved to Colorado. He first started playing football in school and then continued his sports career at the University of Texas at Austin, Texas.

He was then employed by the Tampa Bay Buccaneers as an assistant coach for offensive quality control under head coach Jon Gruden. He was almost the same age as Kyle in 2004 when he held a comparable job with the San Francisco 49ers in 1990.

Gary Kubiak hired Kyle in 2006 to work as the Houston Texans' wide receivers coach. He has also been allowed to serve as offensive coordinator at the University of Minnesota in 2007. Kyle was formally elevated on January 11, 2008, making him the NFL's youngest coordinator—more than three years younger than Josh McDaniels of the New England Patriots.

Kyle departed the Texans in 2010 to sign with the Washington Redskins. Some have questioned if Kyle's employment was an instance of unjustified nepotism due to the squad's record during his time on the club. The Washington Redskins dismissed Kyle, his dad, and several members of the coaching staff on December 30, 2013.

He was appointed as the Atlanta Falcons' new offensive coordinator on January 18, 2015. Kyle's play-calling and the Falcons' execution of those plays helped the Falcons defeat the Patriots 28-3 in Super Bowl LI.

One day after the Super Bowl in February 2017, Kyle signed a six-year contract to become the San Francisco 49ers' new head coach. By the way, on July 1, 2021, the NFL penalized him $50,000 for breaking the practice regulations while participating in organized team activities.

Kyle Shanahan is married to a woman whose name is Mandy. They married back in 2005. Kyle and his spouse have three children: Carter, Lexi, and Stella.

Kyle has received the following awards throughout his football career: