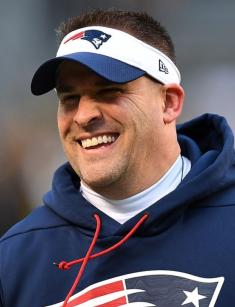 Josh McDaniels is a coach and offensive coordinator employed by the New England Patriots; he has helped the team win six Super Bowls. The man also used to be a head coach at Denver Broncos for a season.

Joshua was born on April 22, 1976, in Ohio. The boy’s father, Thom McDaniels, devoted 40 years of his life to football coaching and worked with high-school teams; USA Today called him the coach of the year on this level. Thom’s great heights inspired young McDaniels; he began to consider the same career for himself.

Josh went to Canton McKinley High School and practiced sports as an amateur at first; he continued to do so after graduation and entering a college.

McDaniels was educated at John Carroll University and joined its football team as a wide receiver in 1995; he carried out QB duties sometimes. In this period, the famous linebacker London Fletcher was his teammate.

The senior graduate assistant at Michigan State University was McDaniels’s first job: he received it thanks to his father’s acquaintance with the then coach Nick Saban. A short period of working in plastic sales followed, but the man returned to football in 2001 and got hired by the New England Patriots.

Year by year, Josh was climbing the career ladder: the personnel assistant was promoted to the position of a defensive assistant in 2002 and became a quarterbacks coach and offensive coordinator in 2004 and 2005 correspondingly. The team experienced both triumphs and losses; the failure in the final game of Superbowl in 2007, when the New York Giants managed to beat the Patriots, was especially bitter.

In 2009, McDaniels started collaborating with a new team, the Denver Broncos, as their head coach. Still, it was a short story because of a trade controversy involving the quarterback Jay Cutler and a videotape scandal.

2011 was marked with the new contract with the St. Louis Rams; Josh became their offensive coordinator. However, he had no particular influence there and decided to leave soon.

The football expert resumed his duties in the New England Patriots in 2012 and became their QB coach and offensive coordinator again. His work with athletes has proved to be advantageous: the team won three Super Bowls in 2014, 2016, and 2018.

In 2018, the man was named the next head coach of the Indianapolis Colts; the team could use him after the retirement of one of the most talented players, Andrew Luck. However, it did not happen so: Josh changed his mind and stayed with the Patriots. All in all, there were many rumors about his leaving; Chad O’Shea from the Miami Dolphins was allegedly the one to replace him.

Joshua rarely talks about his personal life in interviews. He married his wife, Laura, in 2002; the couple had met as FiberTech Plastics employees and dated for two years before the wedding.

Four children have been born in this family: Jack, Maddie, Livia, and Neenah. Despite his busy schedule, the father tries to spend as much time with them as possible.

In 2019, the Patriots’ offense was not as good as expected; many accused McDaniels of the failure. There were many speculations that the coach could have been hired by the Cleveland Browns, but January 2020 brought the news: Josh was going to stay with the Patriots, which was actually beneficial for the team, helping keep Tom Brady in.