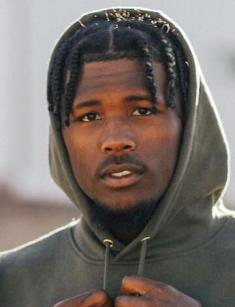 Tee Higgins is an American football star. He plays as a wide receiver for the Cincinnati Bengals of the NFL.

He was born on January 18, 1999, in Oak Ridge, Tennessee as Tamaurice William Higgins. He majored in sports communication in college.

His dad's name was Eric. He passed away in 2022. He was a laid-back person and his son inherited his character.

Tee's mom's name is Camilla Stewart. Now, she works as a home health care provider. She used to be a crack cocaine addict for most part of her life. She began taking and selling drugs at the age of 19. Camilla would spend many months in jail and then rehab.

Tee's childhood was full of stress and uncertainty. When his mom was at home, she could live him alone without warning him and go somewhere in the middle of the night. The future star and his siblings often had to stay with their grandmom or aunts. Sometimes, Tee had to run to his grandmom's house alone at night.

The worst moment happened after Camilla split up with Eric and started a relationship with a drug dealer. He shot her in the head but she survived.

Fortunately, Camilla found enough willpower to overcome her addiction. She's been sober for over 15 years already. She loves to attend the matches that her son participates in. Camilla says that Tee remains "a mama's boy", in spite of his age.

In school, Tee was equally good at basketball and American football. He even received several basketball scholarship offers from various colleges but opted for the other sports discipline.

In 2018, Tee became a national champion. The next year, he was named to the All-ACC first team.

In 2020, he signed his rookie contract with the Cincinnati Bengals. He was supposed to stay with this team for 4 years and earn $8.6 million. The same year, he debuted in the NFL.

At the beginning of his professional career, Higgins used to wear a jersey with the number 5. In 2021, he switched to 85.

In 2022, he got a concussion during one of the matches. He quickly recovered after the injury and came back to games.

The star prefers to keep his private life out of the limelight. His marital status remains secret. Probably, he's fully focused on his career.