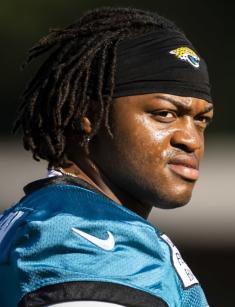 James Robinson is an American football star. He's a running back for the New York Jets of the National Football League.

The future celebrity was born on August 9, 1998, in Rockford, Illinois and spent his early years there.

His dad's name remains unknown. His mom's name is LaTrica Saygo. She remarried another man who became James's stepfather. The sportsman has two younger sisters, named Semaj and Chaya.

James has always been very close to his mom. He states they have never separated from each other for a long while — except for the years that he spent in college. LaTrica always tries to attend all the important games that her son takes part in. When she and her new partner were diagnosed with Covid-19, James got incredibly worried for the fear of losing her. Fortunately, the couple recovered and the family reunited soon.

In college, James used to play football and basketball. In 2020, Jacksonville Jaguars offered him a contract as an undrafted free agent. This happened shortly after the NFL Draft was over. The next year, the sportsman got an injury: his left Achilles tendon was ruptured.

In 2022, a trade took place: James became a NY Jets player. By that moment, the trade rumors had been circulating for a while already. This team was looking for someone to substitute their rookie running back who had to take a break because of an injury.

His jersey number with the Jaguars was 30. The Jets gave him the 23 number.

He has signed endorsement deals with such major brands as Tide and Campbell's Chunky. Most probably, in the future, he'll hit the news many more times for his collaborations with various companies.

The other football players whom James is most frequently compared to are Travis Etienne, Antonio Gibson, AJ Dillon, Alvin Kamara and Adam Thielen.

Since 2018, the star has been dating Morisa Monroe Garnhart. She's from Illinois as well. Her dad passed away in 2018 because of prostate cancer. He used to be an entrepreneur and he ran a local construction firm.

Morisa was a cheerleader. In 2020, James launched his clothing line and she helped him to promote it. They both modeled for the clothing line's website.

Some sources state that James and Morisa have officially tied the knot — but neither of them has confirmed this rumor. They're living together in a new house. They moved into it in 2020, after James played his inaugural NFL game.

Morisa was incredibly happy to get to know about her boyfriend joining the NY Jets. He brought her a Jets gift bag. She proudly showcased it on Instagram and confessed that she broke out in tears with joy.

James's girlfriend is on very good terms with his mom. The former even calls the latter her "bonus mamma". They watch football matches together and discuss James's stats and highlights.