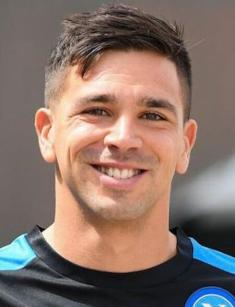 Giovanni Pablo Simeone Baldini, who was born on the 5th of July, 1995, is an Argentine-native athlete and football player. He currently plays for such teams as Serie A, Hellas Verona, and the Italian national team. He is of Argentine nationality and mixed ethnicity.

Giovanni was born in Buenos Aires, which is the capital of Argentina. His dad is a well-known football player whose name is Diego Simeone, so Giovanni has been interested in this game since he was a young age. His mom is Carolina Baldini. Along with them, Giovanni relocated to Italy when he was 2. But after about five years of living there, the family moved to Spain due to the dad's football career. In 2005, Giovanni left Spain and decided to live in Argentina, where three years later he first started playing for River Plate football club. Raised in different countries, Giovanni has two younger siblings whose names are Giuliano and Gianluca. By the way, they are also both football players.

Any information about Giovanni's education is missing.

After rising through the junior ranks, Giovanni committed to the team in November 2011 by signing a three-year professional contract. Giovanni made his league debut on August 4, 2013, starting and playing the full 90 minutes in a 1-0 away loss against Gimnasia La Plata after being called up by the main squad during the preseason in July 2013. Later on in the month, he extended it through 2016. On September 8, Giovanni scored his first goal as a professional, adding to a 3-0 victory over Tigre at home.

Although Giovanni is dual-national (Argentine and Spanish), he represents Argentina abroad. He earned an under-20 cap for Argentina and ended the 2015 South American Youth Football Championship as the tournament's best scorer, leading Argentina to its fifth championship.

The football player scored in his senior international debut on September 8, 2018, in a 3-0 friendly victory over Guatemala in Los Angeles. He was a member of the squad that defeated Mexico in the Adidas Cup amusement match in November 2018.

Although he has been used as a second striker, he is a skilled, strong, and opportunistic attacker with an eye for goal who can play wherever in the front line.

Since 2014, Giovanni has been a legal citizen of Spain. He currently lives in this country with his wife, Giulia Coppini. They got married in 2021 in Ibiza. They knew each other since they had both met in Florence ages before. The footballer is a big lover of pets; he even has a dog and a cat at home.

Here is the list of honors Giovanni received throughout his football career: