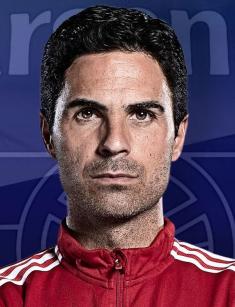 Mikel Arteta Amatriain, who was born on the 26th of March, 1982, is a Spain-born former football player. Currently, he works as a manager for the Premier League club Arsenal.

Michael began his senior career back in 1999 at the Barcelona football club. Throughout his career, he played for Rangers, Real Sociedad, Everton, and Arsenal. He won many competitions, including two FA Cups. Since 2020, he is no longer a football player but a manager.

Mikel's hometown is the Spanish city of San Sebastian. He spent his entire childhood there in Basque Country playing football because he had been interested in sports since an early age. The interesting fact is that Mikel is a multilingual man. He can speak fluently not only Spanish but also English, Basque, French, Catalan, Portuguese, and Italian. When Mikel was younger, he had issues with his blood system, so he went through a heart operation. Nothing is known about who his parents are.

Mikel started playing football at Antiguoko, where he became friends with Xabi Alonso, a fellow midfielder since they played together every weekend. They frequently played together in San Sebastián's gutters and on the city's beaches, and they fantasized about doing so at Real Sociedad. At the age of 15, Mikel went to the FC Barcelona B team, while Alonso eventually signed with Real Sociedad. In December 2000, he was sent out on loan to the French club Paris Saint-Germain after failing to make the first squad. Then, in a £6 million transfer, he joined the Scottish team Rangers in March 2002. And a few years later, on August 31, 2011, he signed a four-year contract with Arsenal for a sum of £10 million.

Mikel had several possibilities after retiring. He received offers from Arsène Wenger to head the Arsenal Academy, Mauricio Pochettino's backroom staff at Tottenham Hotspur, and Pep Guardiola's coaching staff at Manchester City. He was hired by Manchester City as an assistant coach on July 3, 2016. In a contract that runs until 2023, Mikel was named head coach of his old team, Arsenal, on December 20, 2019.

As of November 2022, Mikel is still in a long-time relationship with his wife, Lorena Bernal. She's a TV host and actress from Argentina. Mikel and Lorena have three children: Oliver, Daniel, and Gabriel. Also, Mikel took part in filming Amazon's documentary series about the Arsenal football club.

Here is the list of honors Mikel received throughout his career as a football player and manager: