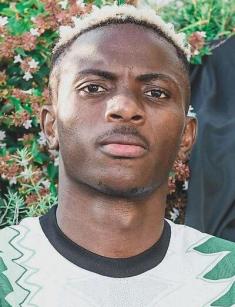 Victor James Osimhen who was born on December 29, 1998 is a Nigerian-born professional football player. Currently based in Italy, he is a striker for Serie A club Napoli. Victor is also playing for Super Eagles. He won several awards, including the Golden Boot.

The football star came from a poor background. He was born and raised in Lagos, Nigeria. Victor's mother passed away when he was a child, so his father, Patrick, raised his children alone. Shortly after his wife died, Patrick lost his job, so the family was always on the brink of survival. Victor and his siblings sold newspapers and bottled water to contribute to the family's budget. He started playing football in elementary school, inspired by his older brother, who was a local football star.

Victor started his career as a football player in 2014, when he joined Ultimate Strikers Academy in his hometown. In the 2015 football season, Victor already became one of the top scorers. At the FIFA World Cup, he scored an astonishing number of 10 goals, and several legendary British football clubs were interested in acquiring him. Instead, he chose to sign a contract with a German club.

Victor joined the team after he signed a contract until 2020. He made 12 appearances before his shoulder injury in May 2018. Victor underwent surgery, which caused him to miss the last five matches of the season.

Several months after his surgery, Victor became a part of Belgian club Charleroi. He initially was on a loan deal. Victor's stats for all competitions with the club were 21 goals, and Charleroi opted to acquire the player.

In July 2019, Charleroi decided to transfer Victor to the French club Lille, where he remained until the summer of 2020. Victor's achievement in Lille was scoring 13 goals in 27 appearances.

In July 2020, Osimhen signed a contract with Italian club Napoli, becoming the most expensive Nigerian footballer to date.

The player's all career goals number is 75.

In July 2022,the news broke that German Bayern Munich and British Arsenal clubs identified Victor as a potential transfer target. However, the player's agent mentioned that Osimhen intends to stay at Napoli.

The Napoli star is currently in a relationship with a woman named Stephanie.

Osimhen often uploads photos of himself around luxury cars. However, he hasn't disclosed any information about the cars and house he owns.

In November 2021, Victor suffered an eye injury in an accident during Napoli to Inter game.

He is a huge fan of Chelsea legend Didier Drogba.