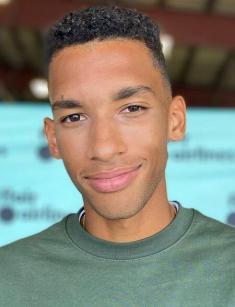 Felix Auger Aliassime who was born on August 8, 2000 is a Canadian-born professional tennis player. Four times ATP Tour winner, he is currently one of the world's rising tennis stars.

The player hails from Montreal, Quebec, Canada, but spent his childhood years in the small town of L'Ancienne-Lorette. His father's name is Sam Aliassime. One of 12 children, Sam immigrated to Canada from Togo in pursuit of a better life. There he met and married a children's psychology teacher named Marie Auger. The couple had two children. Felix's sister's name is Malika, and she is very passionate about tennis, too. People often think that the tennis star was adopted, but he was raised by loving biological parents, whom he remains close with.

Felix began training in tennis when he was just four years old. At the time, his father was a tennis instructor, so it was an easy choice. Sam coached Felix until he turned 12 years old. His son soon proved that he is a very capable player when at the age of 6 he already made the final of his first tournament.

Felix became a professional tennis player in 2017, when he was 17 years old. He was the youngest player to win a main draw match on the ITF Challenger Tour. In 2018, he made his ATP Tour debut and defeated Vasek Pospisil at Indian Wells. Felix's breakthrough season came in 2021, when he reached his first grand slam quarter-final at Wimbledon. At the end of the season, he entered the world's top 10 tennis players' rankings. In February 2022, Auger-Aliassime withdrew from the Dubai Championships after he injured his back.

Since 2019, Felix has been in a relationship with a woman named Nina Ghaibi. She is from Croatia and works in the equestrian industry. Felix and his girlfriend became Instagram official in 2021, when he posted a photo of them together for the first time.

The player's role model is Roger Federer, with whom he shares a birthday.

Felix is a very creative person and says that he would become an artist if his tennis career didn't work out. He also plays piano and once confessed in an interview that music is a very important part of his life.

Felix wants to inspire kids to pick up a racquet and is also fundraising money for educational programs for disadvantaged children in Togo.