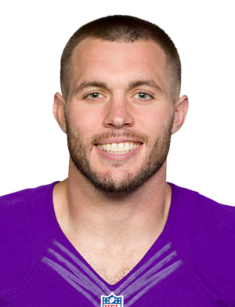 Harrison Smith who was born on February 2, 1989 is an American professional football player. After playing college football for the Notre Dame Fighting Irish football, he was selected by the Minnesota Vikings of the National Football League (NFL) and became their safety.

The player hails from Augusta, Georgia, but attended high school in Tennessee. His parents' names are Susan and Steven. Harrison also has two brothers and one sister. Both of his brothers are former athletes. The NFL star's aunt, Elaine, is an actress, who appeared in such TV shows as "Friends" and "NCIS".

As a result of his performance in high school, Smith was considered to be a four-star recruit. He received offers from the University of Tennessee, Stanford, Auburn and Alabama. Harrison decided to commit to the University of Notre Dame.

Harrison began his college football career as a linebacker, but eventually ended up playing as a safety. From 2007 to 2011, he recorded 187 tackles and 3.5 sacks. He also was selected as the team's captain in 2011.

Smith was picked by the Vikings during the first round of the 2012 NFL draft. He agreed to a four-year, 7-million-dollar contract with the team. The player finished his first professional season with 104 tackles, 1 sack, 3 interceptions, and 2 touchdowns.

In 2015, the player was named to the Pro-Bowl for the first time. He only started 13 games in the season because a knee injury kept Harrison out of the team for a while. His stats by the end of the season were 66 combined tackles, 1.5 sacks, two interceptions, and a touchdown.

In 2016, he signed a five-year, 51-million-dollar contract extension with the Vikings. His total NFL career stats are 640 tackles and 16.5 sacks.

In 2020, Smith married his girlfriend, Madison Bayless Bankston. The couple started dating in 2012, but knew each other since they both were children. Harrison's wife was a track star in high school and currently works as an accountant manager.

Green Bay Packers quarterback Aaron Rodgers considers Harrison one of the best safety in the league.

In his spare time, the player regularly visits a local juvenile detention center to remind troubled kids that they can choose a better future. He also has a pilot license that he earned during the offseason.

Smith earned Pro Bowl honors for five consecutive seasons (2015-2019). He was also named to the Pro Bowl once again in 2021. Harrison is the only player in franchise history with 4 career INT returns of 50 plus yards.