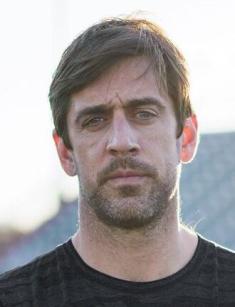 Aaron Charles Rogers is a California-native football quarterback. He was born on December 2, 1983. Aaron is of American nationality and white ethnicity. As Aaron calls himself, he is an atheist and doesn't belong to any religion.

As of 2022, Aaron plays for the Green Bay Packers under the number 12.

Aaron was raised in Chico, a city that is located in California. His mom is Darla Pittman, and his dad, who is a Texas native, is Edward Rodgers. Arron knew about football since he was young because his dad was also a football player. The younger of Aaron's two brothers, Jordan, played quarterback for Vanderbilt University and then briefly for the Jacksonville Jaguars and Tampa Bay Buccaneers in the NFL.

Aaron completed Pleasant Valley school in his hometown and then graduated from California College (he also studied at Butte College).

Aaron has been a football quarterback for the Green Bay Packers since 2005. He produced great stats as a junior with Cal, tossing for 2,320 yards with a 67.5 completion rate during the regular season, and was predicted to be taken early in the 2005 NFL Draft. His last collegiate season saw him throw for 24 touchdowns and just eight interceptions, which impressed many NFL scouts. People even called Aaron a "talented, strong-armed junior" who "combines arm strength, mechanics, and delivery to make all the throws," but cautioned that his numbers might be inflated because he played in a system that was more conducive to quarterbacks and that he would need to adapt to the more complex defensive schemes of the NFL.

Aaron, who has raised a Christian, said in a 2017 interview that he no longer identifies with any organized religion.

From 2014 to 2017, Aaron dated the actress Olivia Munn. From 2018 to 2020, he dated the retired NASCAR driver Danica Patrick. In the second part of 2020, he began dating Shailene Woodley, a famous actress. In a 2021 visit to The Tonight Show Starring Jimmy Fallon, Woodley announced her engagement to Aaron. Aaron and Woodley called off their wedding on February 16, 2022.

Throughout his brilliant career, Aaron gained such awards and honors as: