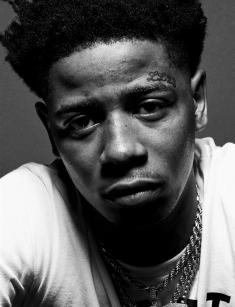 Big Scarr was an American rapper of African descent who was signed to Gucci Mane’s 1017 Records.

The future star was born on April 7, 2000, in Memphis, Tennessee, as Alexander Woods.

He has never revealed any information about his parents. The only thing his fans know is that Alexander perceived his dad as his best friend. The boy used to live with his grandmother until she died from lung cancer when he was 13. After that, he moved into his dad's house.

Some fans believe that Pooh Shiesty, a fellow rapper, was Big Scarr's brother. In fact, they were cousins. Alexander had eight siblings.

Unlike many of his colleagues, this guy wasn't obsessed with music from an early age. It was his friend Baby K who introduced him to this lifestyle and occupation.

The next year, the budding talent joined the 1017 Records record label that belongs to Gucci Mane. The Atlanta Records major is in charge of distributing its music.

His breakthrough record was released in 2021. It was a mixtape. Before that, the artist already had a fanbase but its growth wasn't explosive.

The Big Scarr alias was chosen to commemorate an accident that Alexander had at the age of 16. He was injured in a car and got a scar on his face.

One of his most well-known songs is called Big Boy Diamonds.

He confessed that he never composed lyrics for his tracks in a conventional way. The words dawned on him spontaneously. He dubbed this technique "punching in".

His fans were looking forward to hearing his solo albums but this dream never came true.

There has never been any official information available about this celebrity's romantic relationships. Allegedly, he had several girlfriends but wasn't formally married. According to some sources, when the artist passed away, his then-girlfriend was by his side. Only the dearest and nearest of Big Scarr know whether he had kids.

The star died on December 22, 2022. Wikipedia and other media claim that a drug overdose took place. However, Big Scarr's friends and family members have never confirmed this fact. His official cause of death remains unknown. He had a busy touring schedule planned until May 2023.

When the sad news hit the headlines, fellow musicians publicly expressed their condolences. Gucci Mane and NLE Choppa were among them.

Two years before his death, Alexander had a severe accident but remained alive. He was shot in the hip and had his appendix removed. This guy was never ashamed of his injuries — instead, he treated them as valuable life experiences.