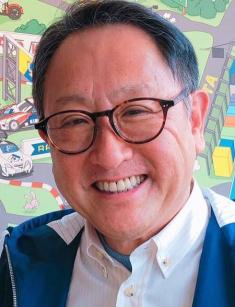 Akio Toyoda who was born on May 3, 1956 is a Japanese businessman. He is known for being the CEO and president of the automotive manufacturer Toyota Motor Corporation (TMC). Toyoda's fortune is estimated at 1 billion dollars. In 2018, he ranked #29 on the Forbes Powerful People list.

The chief executive hails from Nagoya, Japan. His grandfather, Kiichiro, founded Toyota Motor Corporation. Akio's parents' names are Shoichiro and Hiroko. His father was the Chairman of Toyota from 1992 until 1999. Toyoda received his secondary education at Keio University and also studied business administration at Babson College.

Before starting his career in Japan, the businessman was an executive vice president and board member at New United Motor Manufacturing. The automobile manufacturing company located in California, was jointly owned by General Motors and Toyota.

At the beginning of 2000, Toyoda returned to his homeland after studying and working abroad. Several months later, he was named to TMC's Board of Directors. His main responsibilities were supervising domestic and international marketing operations. In 2005, Toyoda was promoted to executive vice president. Four years later, he was appointed TMC's president.

From 2009 to 2010, Toyoda was in the middle of a scandal when the company recalled over 8 billion vehicles. He issued an apology and testified before the US congress, detailing the quality control crises in the field that affected TMC.

In June 2022, Bloomberg reported that the chief executive is currently looking for candidates capable of taking his job in the future.

Toyoda's passion for business and driving led to such achievements as being named the 2012 and 2021 World Car Person of the Year. He also holds the title of CEO of the Year in Japan.

The businessman has been married to a woman named Yuko for several decades. The couple has a son named Daisuke Toyoda who is a vice president of Woven Planet Holding, which develops cutting-edge technology for self-driving cars. Akio and his wife also have a daughter that they keep out of the spotlight.

Toyoda is passionate about racing and owns a sports car collection. In 2021, he showed off his drifting talents using GR Yaris, the new TMC hatchback.

In 2020, TMC's CEO called Elon Musk's Tesla "a restaurant without a chief", claiming that their main electric cars competitor has not created a "real business and a real world" yet.