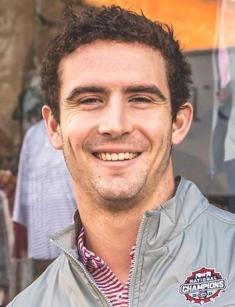 Stetson Bennett is an American football star. He plays as a quarterback for the Georgia Bulldogs.

The future celebrity was born on October 29, 1997, in Atlanta, Georgia. When he was a kid, his family relocated twice within his home state.

His mom's name is Denise. His dad's name is Stetson Bennett III. His granddad used to be a football player and a coach, so Stetson has a perfect family background for this sports discipline.

He got a degree in economics.

This boy began to play football at school. Even though he was good as a senior, most coaches believed he was too light and too short to make a serious career in sports. Besides, he had only two stars as a quarterback. That's why he received only one scholarship offer.

In 2017, Stetson opted for Georgia. When he got to know about a more prominent five-star quarterback who was about to join the same team, he left for Jones County Junior College. He spent only one year there, returned to Bulldogs with three stars and got a scholarship. That team needed a backup quarterback.

In 2020, he performed as a starter for a short while. The next year, he got a chance to fulfill this role again while the main starter had to rest on the bench because of an injury.

In 2021, his team lost the SEC Championship Game and many fans blamed Stetson for that.

In 2022, this guy was instrumental in securing his team's victory in the National Championship. The last time the Bulldogs won this title was 42 years ago. Ten days after that glorious date, Stetson informed the public about his intention to stay with his team. His stats during that season were impressive.

Analysts predict he should have brilliant perspectives in the NFL draft in 2023.

Lamar Jackson, Bryce Young, Aaron Murray and Baker Mayfield are the fellow sportsmen to whom he's most frequently compared.

In 2020, Stetson began dating Cameron Liss. She was born in 1998 in Georgia. She has two sisters, Nicole and Victoria. Her father, Mike, is a VP at SAP Services. Her mother, Christy, is an attorney.

Stetson's girlfriend specialized in biology, psychology and Spanish at UGA. Her family has a special bond with this establishment. They enthusiastically support the Bulldogs.

Cameron went to Spain to study and volunteered on a medical mission in Guatemala. She's planning to become a physician.