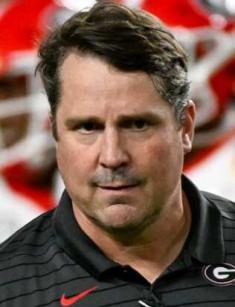 Will Muschamp is an American football coach. He's a defensive coordinator and he specializes in safeties.

The future star was born on August 3, 1971, in Rome, Georgia and got higher education at the local university. He spent his early years in Florida and came back to his home state when his father landed a job as a school principal there.

At school, this guy was good not only at football but also at baseball, basketball and running track.

Will has a brother named Mike. He's a football coach too.

After graduation, Will began to work as an assistant coach at Auburn in 1995.

In six years, LSU hired him. Soon, he began to take care of the defense. His team showcased the highest defense score on a national level.

In 2004, Will joined the Miami Dolphins team. In two years, he came back to Auburn.

In 2008, the University of Texas offered Will a $425,000 annual salary and he accepted it. No other assistant coach in the Big 12 has ever benefited from such generous earnings. Auburn was about to offer him an identical salary without a buyout option. The same year, the administration of Texas informed Will that he would become the head coach after the current one retired and his salary would skyrocket up to $900,000. However, the then-head coach had no retirement plans.

In 2010, Will was appointed the head coach of the University of Florida. That was a turbulent time. The offense of his team was substandard. Because of a high number of losses, Will quit this position in 2014.

The same year, he returned to Auburn. Auburn Tigers offered him a 3-year contract of up to $1.8 million yearly. Any agent would be proud of this achievement.

In 2015, Will began to coach the South Carolina Gamecocks. In five years, he was fired for failing to deliver impressive results.

In 2021, Kirby Smart, the UGA head coach, informed the public about hiring Will. The latter was supposed to be in charge of defense and coaching the coaches. In 2022, Will helped the Georgia Bulldogs win the National Championship.

Dabo Swinney and Eli Drinkwitz are the two fellow coaches Will is most frequently compared to. Derrick Henry is one of the most prominent players whom Will coached.

Will got to know his future wife Carol in the late 1990s. She was born in Georgia too. Carol got a degree in social work. She was teaching kindergarten when she met Will.

The couple tied the knot in 1999. They lacked money for a proper honeymoon and spent time at a family friend's beach house instead of going abroad.

There are two kids in the family, Jackson and Whit. The younger son was born four years after the elder. Both are good at sports.

The Muschamps have two Goldendoodles and a cat. The latter used to live in the street and was adopted.