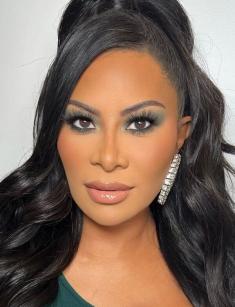 Jen Shah is an American TV personality famous for being a cast member of the reality television series The Real Housewives of Salt Lake City.

The future celebrity was born on October 4, 1973, in Salt Lake City, Utah, as Jennifer Lui. She spent her early years in her hometown.

Her dad's name is Sione Kaisa, he's of Irish and Tongan-Hawaiian origin. Her mom's name is Charlene Bonnie, she's of Italian and Hungarian descent. There are five more kids in the family: Judd, John, Jessica, Jerrit and Jacob.

Jen used to be Mormon. When she found out how disrespectfully the Mormons treated black people, she switched to Islam.

In 2020, the inaugural season of The Real Housewives of Salt Lake City hit the screen. Jen starred there and she became famous overnight. Angie K, a fellow show personality, became her friend. In 2022, the dress that Jen wore at the show's reunion seemed familiar to her fans. She explained that Cardi B had opted for the same outfit for the American Music Awards the previous year.

This lovely lady has always looked so innocent, especially when she used to wear box braids. However, in 2023, she was sentenced to 6.5 years behind the bars. Then, she'll spend 5 years under supervision. She expected a much longer term in jail, so she celebrated her "luck" with a gorgeous dinner in a swanky restaurant.

For around a decade, Jen was targeting vulnerable individuals aged over 55. She developed a nationwide telemarketing scheme. In 2021, her legal case was chronicled in the Housewife and the Shah Shocker documentary.

Cameron Brewster and Stuart Smith were accused of being involved in this affair too. Stuart used to be Jen's first assistant at The Housewives.

Murilo Bueno, another assistant, was involved in another nasty story with Jen. They were accused of stealing a clutch bag from a boutique.

Jen is not a poor person. Her assets are impressive: she earned from $50K to $100K per episode of the show. She runs three businesses in the beauty sector. She has over 230,000 followers on Instagram, which gives her an opportunity to make money on ads. Nevertheless, a large part of the premium outfits and accessories that police discovered in her house were counterfeit. They can't even be sold at an auction.

Currently, Jen keeps monetizing her TV background. For $99, anyone can ask her to record a personalized video through the Cameo service.

In 1994, this celebrity tied the knot with her college boyfriend Sharrieff Shah. He used to be a football coach, an NFL Player Association agent and a sideline reporter. In 2021, he got a degree in law and spent 12 years working as an attorney. Then, Jen's husband came back to football coaching.

The couple has two kids. They welcomed their first son, Sharrieff Jr, in 1994. In nine years, Omar followed suit.