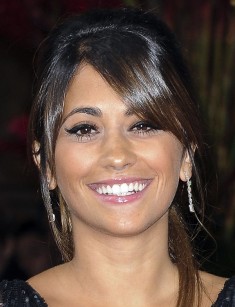 Antonella Rokuzzo is a wife of Lionel Messi , FC "Barcelona" forward. They married on June 30, 2017 after 9 years of relations. The couple have two children.

Antonella was born to a family of workers on February 26, 1988 in Rosario, Santa Fe, Argentine. Her family was friends with family of Lionel. Antonella‘s brother was a childhood friend of a future champion Lionel. When Messi was 5 he used to play in children's football team "Grandolini". His father, a simple worker, was a football couch of this football team. At the age of 10 Lionel joined "Newell s Old Boys", and played in this football club up to 13 years.

Messi was diagnosed with a growth hormone deficiency as a child, he needed expensive medical treatment. His family didn’t have such money and his father decided to go with his son across the ocean. He wanted Lionel joined FC "Barcelona", who agreed to pay for his treatment.

President of the Academy Carles Rexach understood that Lionel was a talented boy and agreed to pay all medical costs. So in 2000, Lionel left his homeland and became a member of the club youth team. Messi scored 4 goals in his first game. Lionel never left the club in gratitude for saving his life. Only in 2011 he joined Argentina national team.

Antonella graduated from school and became a dietician. After graduation, the girl worked in a local fitness club. Antonella lived a modest life and didn’t visit parties. The girl even did not use her attractive face in a modeling career. The biography of a slim Argentinean (height - 164 cm, weight - 50 kg) became known to the whole world because of a love story between her and the most highly paid football player of our time.

In the mid-2000s, Messi officially had relations with only two girls: with a "Playboy" model Luciana Salasar and Macarena Lemos. Since 2008, Messi has been in a relationship with Antonella Roccuzzo, his childhood friend. The footballer announces his choice in early 2009, when he takes the girl with him to Spain.

Everyone noticed that Antonella had a good impact on Messi’s character, and caused new victories of Lionel. The couple almost never parted, all the free time young people spent together or with their close friends - soccer player Cesc Fabregas and his wife Daniella Semaan, as well as Gerard Pique and Shakira.

In early 2012, Messi figured out that Antonella was pregnant. His wife pregnancy made a great impression on Lionel. The young man could not control his emotions and shared the news with his fans in an unusual way: Messi put the ball under his T-shirt after scoring a goal for the Argentina national team during the qualifying match for the World Cup.

On November 2, 2012 their first child Thiago was born. His father tried not to leave the baby for a minute, spending all his free time with the child. On his left leg, Messi made a tattoo with the name of his son. Lionel takes care of not only his relatives and friends. Messi helps children to fight against serious illnesses. The footballer organized the fund Fundación Leo Messi.

In 2015, Messi announced his wife's second pregnancy in Instagram. He shared a photo of Antonella and their eldest son kissing the mother's rounded belly and wrote: "We are waiting for you, baby! We love you! ". Second son Mateo Messi was born on September 11, 2015 in Barcelona.

In 2015, there were some provocations. The Playboy star, Rocio Marengo, announced on the Beat FM radio that the Argentine football player with number 10 offered her romantic relations, but the girl refused. The model hinted at the name of Lionel Messi. After that Rokuzzo announced that she would sue for libel. Rocio Marengo immediately answered Antonella that she had in mind not an Argentine striker, but another footballer.

On June 30, the long-awaited wedding of Antonella Rokuzzi and Lionel Messi took place in their hometown Rosario. They decided to make the celebration at the street, where Lionel was born. The place is considered criminogenic. 200 people guarded the hotel, where the event was held. Among 260 guests there were also famous football players who came from Europe. There were 300 police officers on the way to the airport.

The city administration created good conditions for a peaceful ceremony. The street was cleaned of garbage , national flags were established. A special area with a large screen was created for Messi fans. People could watch the footballer's wedding online.

Antonella's friend - singer Shakira and her husband Gerard Piquet also arrived. Newlyweds said that instead of wedding gifts, they are only waiting for donations to the charity fund of Messi.

The ceremony began at 7 pm. Lionel, Antonella and their first-born Thiago came to the altar to register their relationship. Both Antonella and Lionel engraved the date of their wedding on the nameless fingers XXX-VI-XVII. After the ceremony Messi shared a photo of their hands on his page in Facebook. The wedding dress of the fashion designer Rosa Clara, her the costumes wear Eva Longoria and Spanish Queen Letizia, was delivered for Antonella from Barcelona.

After the ceremony, the couple walked along the red carpet to the center of the hall and performed the first dance. Now there is a discussion of Messi and Rokuzzo first dance video on Internet, which shows that the player scores goals better than he dances. 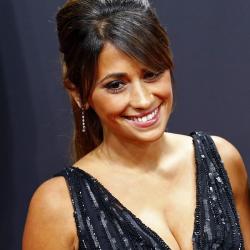