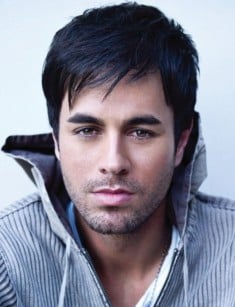 On May 8, 1975 to the family of the famous Spanish singer, producer and actor Julio Iglesias and Philippine TV presenter and journalist Isabel Preisler, was born their third child. The boy was named Enrique. Three years after his birth, the couple broke out. Julio went to Miami to record songs, the children stayed with their mother in Madrid.

Isabel worked hard. Nanny Maria Olivares was responsible for children’s upbringing. Enrique mentions her in all his interviews as a member of the family. In 1985, the family went through very hard times. The ETA terrorist group threatened Julio Iglesias and even kidnapped Enrique’s grandfather. He was rescued, but the attackers directed all their threats towards the children. Isabel considered that it would be safer for them in America.

Since then, Julio took responsibility for children’s education. However, Enrique complains that his father took little care of him, and when the stepmother appeared the emotional climate in the family was no longer comfortable. Enrique studied at the prestigious American school in Miami "Gulliver Preparatory School". He was shy and did not have a lot of friends. The school was considered as a school for the rich, and students came there on expensive cars. Julio Iglesias didn’t care. Being behind the wheel of the "old banger", as Enrique calls his car, the future musician felt even more embarrassed.

Since 16 the son of the singer also dreamed of a musical career, as well as his elder brother Julio. Enrique wrote texts for his future songs, but his father did not take Enrique seriously, because he saw his son as a businessman. Under pressure, Enrique even went to university at the Faculty of Business. But even during his school years, together with the manager, he sent demo to recording studios, and promoted the songs under the name of 'Enrique Martínez’ from Central America.

In 1994 Mexican "FonoMusic" signed a contract with a young singer. With a light heart, Enrique left the university and went to Canada to record his first album.

In 1995, the single "Si tú te vas" released before his debut album "Enrique Iglesias", which instantly gained popularity in Spain, Portugal and Italy. A million of copies were sold out in a week, a rare accomplishment for an album recorded in a language other than English. The result turned out to be phenomenal. The song "Por amarte daría mi vida" was even used in one Mexican TV series.

In 1997, Iglesias's second album "Vivir" (Live) was released. He selected the best musicians who had experience working with Elton John, Billy Joel and Bruce Springsteen and went on tour. During this period, Enrique visited 16 countries, and played 78 concerts.

The same year, as well as his father Enrique was nominated for the "American Music Awards". But Julio Iglesias said that if his son becomes the "Best Latin American" singer, he will leave the ceremony. Enrique refused the nomination in order not to quarrel with his father, but sang his song "Lluvia Cae" at the ceremony, As a result, the award went to Julio.

In 1998, fans were delighted with the third album of the artist Cosas del Amor. This time he received the "American Music Awards" against Ricky Martin . The song "Bailamos" was used in the movie "Wild, Wild West". This song brought Enrique worldwide popularity. He even had to record the album in English, and signed a contract with famous labels. This album includes duets with Whitney Houston and Alsou.

The song "Could I Have This Kiss Forever" ,recorded with Whitney Houston, becomes one of Iglesias's best works. Subsequently, the musician performs this composition at many solo concerts.

In 2000 Iglesias did a world tour again, and in 2001 released the most popular of his albums - "Escape". The disk sold over 10 million copies. In the music video with the same name appears Anna Kournikova. By the end of the year Enrique again becomes "Best Latin American singer". In support of the album, the musician plays 50 concerts in 16 countries.

With the album "Quizás" the singer returns to the Spanish-speaking audience, but the songs in Spanish language are also world-wide popular. In 2003, Enrique released the album called "7", and his father released his 77th album. Julio’s album was very successful. As for the work of his son, it didn’t get high rating. Enrique wasn’t upset and went on his biggest tour; He visited countries where he had not been before. For example, South Africa.

After the tour, Enrique Iglesias was creating his new album. The musician worked really hard. During this period, the singer almost did not appear at concerts and TV shows.

Three years later, "Insomniac" became a "hit album" and pleased fans and critics. The song "Can You Hear Me" became the official hymn of UEFA 2008. Enrique Iglesias performed it at the stadium.

In 2008 Iglesias released two more albums. And in 2010 the musician created "Download to Donate for Haiti". Money from sales went to people affected by the earthquake in Haiti. Next album "Euphoria" brought Enrique Iglesias the largest number of awards in nine categories.

In spring, 2014 Iglesias recorded the song "Bailando", and soon video clip for this song was on YouTube. The music video has gained 800 million views in a week, the whole video has collected more than two billion views. In Russia, the song and video also gained popularity.

Enrique likes simple clothes and fast food as well as expensive cars. And the singer is very afraid of cockroaches (Pitbull mentioned it in his song) and suffers from insomnia.

Enrique Iglesias had relations with Jennifer Love Hewitt since 2000. She even starred in Iglesias' music video for the song "Hero" in 2011. But Russian tennis player Anna Kournikova, who also starred in his video clip "Escape", became the love of his life.

In press, there is always information about their breakups and reconciliations. No one saw the wedding of lovers, but in 2014 at the concert in Los Angeles, Enrique announced that they divorced. In 2015 Iglesias and Anna have been together again.

2014-2017 Enrique Iglesias went on "Sex and Love" tour to support the new album. The singer sang his songs in Sweden, Germany, Spain, Finland, the United Arab Emirates and other countries. The musician has scheduled concerts in Poland, Italy, Mexico and the USA. The schedule of concerts are on the official website. In addition to news and posters on the site, there are photos and videos from his concerts, music videos, a list of songs of the artist with the offer to buy tracks and links to musicians' accounts in social media and other services for communication: from Instagram and Vkontakte to Google+ and Pinterest ».

In June 2016, the song "Duele el corazon" was released in two versions, Spanish and English.

In 2017, Enrique played himself in "Lays stags" commercial. The musician admits that it would be a pleasure for him to star , if he had more free time from concerts and recordings of new songs.

Since June 2017, Enrique and Pitbull will go on a tour together, in which he will visit more than 20 American cities in different states. 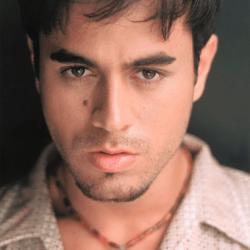