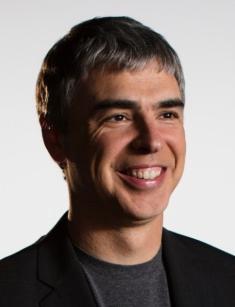 Larry Page is best known to be a co-founder of Google. Page's parents were scientists, and from his childhood, Larry was surrounded by computers. Now he is a board member and a controlling shareholder of the company.

Speaking of Larry's background, he was born in Lansing, Michigan. His parents were both engaged in computing. His father was a computer science professor at Michigan State University. His mother was an instructor in computer programming.

Larry said that in his childhood, their family house was always full of computers and technology magazines. He grew up in this environment following his parents' steps.

In early life, Larry was a very creative guy who was fond of reading. He spent hours leafing through magazines and books about science that were everywhere.

The boy demonstrated goof skills in music. Later he noted that music made a great impression on him. After getting musical education, he realized that time is the primary thing in everything. And these thoughts contributed to the ideas about making a high-speed search engine in the future.

His older brother taught him to take things apart and before long he was taking "everything in his house apart to see how it worked".

Page attended the Okemos Montessori School in Okemos, Michigan (1975-1979), and graduated from East Lansing High School in 1991. Larry finished the University of Michigan and Stanford University.

During his studies at the University of Michigan, Larry started to apply his creative ideas in life. He made an inkjet printer using Lego bricks. He also did research exploring the mathematical properties of the World Wide Web. At that time, he met Sergey Brin, and together they wrote a research paper that became very popular on the Internet.

In 1998, Brin and Page incorporated Google, Inc. with the initial domain name of "Googol," derived from a number that consists of one followed by one hundred zeros—representing the vast amount of data that the search engine was intended to explore. Page had CEO position, and Brin, was named Google's co-founder. The young men had big goals and continued working on their ideas.

Page officially became the chief executive of Google on April 4, 2011, while Schmidt stepped down to become executive chairman. As Google's new CEO, Page's two key goals were the development of greater autonomy for the executives overseeing the most important divisions, and higher levels of collaboration, communication, and unity among the teams.

He reorganized the company's senior management, placing a CEO-like manager at the top of Google's most important product divisions, including YouTube, AdWords, and Google Search.

Larry has been working on the main goal – to make the product that will make people's lives better. In November 2014, the scientist spoke about the priorities of the company: maintenance of the "deep knowledge" of Google's products and breadth of projects. In relation to his then role as the company's CEO, he said what he liked best about his position of CEO – pushing people forward.

According to the latest news, Larry Page wrote a blog post together with Sergei Brin, in which they stated about stepping down from the top positions of Google's parent company Alphabet. Larry would be replaced by Google CEO Sundar Pichai. He made this announcement in December 2019.

Larry Page is a married man. His wife's name is Lucinda Southworth, and she is a research scientist. They have been together since 2007. The couple has two children, supposedly, a son and a daughter.

Larry is known to have an autoimmune disease called Hashimoto's thyroiditis. Earlier, he stated that he had vocal cord problems. It was revealed that the scientist made a donation to a vocal-cord nerve-function research program at the Voice Health Institute in Boston, US. In general, Larry donates enormous sums of money to charity.

He has also invested a lot in Tesla Motors. He promotes the adoption of plug-in hybrid electric cars and other alternative energy investments. Larry has a startup: the team Kitty Hawk has constructed a Flying Car. This project is now facing significant challenges with safety concerns. It is not yet launched for commercial use but possibly will be in several years.

It sounds ridiculous but Larry has been paid an annual salary of only $1 every year since the company went public. His net worth is estimated at around $44 billion.