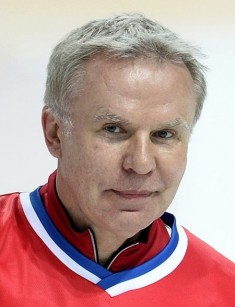 The legend of Soviet hockey Fetisov Vyacheslav Alexandrovich was born in Moscow in one of the capital's maternity hospitals on April 20, 1958. The father and mother of Vyacheslav worked at the aircraft plant in Moscow. The family lived in a small room of one of the factory barracks. In addition to Vyacheslav, another son Anatoly grew up in the family.

His father was a sports man. He was fond of boxing and played for the football team of his plant. He sent Vyacheslav to the ice hockey rink next to their house. A true enthusiast and fan of his job, Boris Bervinov was his coach. He turned the courtyard boys into a good team. As for Vyacheslav Fetisov, the devoted all his time to hockey.

Under the leadership of Bervinov the hockey team managed to get to the final of the city tournament "Golden Puck". By chance, the game was attended by the future Honored coach of Russia, and then the coach of CSKA Yuri Chabarin. Playing for his team, Vyacheslav almost immediately became the leader of the team. And at the tournament it was obvious.

Of course, Chabarin immediately notice the young hockey player and invited to play for the hockey club "Dynamo". But later it turned out that the hockey player Fetisov was still too young (he was only 12 years old). But the boy was taken to the children's and youth school of the CSKA Olympic Reserve.

Vyacheslav Fetisov in CSKA and the USSR national team

As a part of the CSKA youth team, and then as a part of the Russian youth national team, Fetisov began to win one prestigious international tournament after another. The first victory of the young player was the World Junior Championship, then the European Championship. After graduation Slava went to Leningrad, where he decided to continue his studies already on the basis of the Leningrad Military Institute of Physical Education.

The hockey player spent most of his time playing for the CSKA team. The legendary Viktor Tikhonov was his coach, who was a "dictator": hockey players listened to him without questions. From morning till evening they were training, and in competitions they had to win their rivals.

When the boy grew up, it became clear that the genetics of the hockey player did not disappoint not only in terms of talent, but also in terms of growth (185 cm). At the age of seventeen, Fetisov was taken to the main team of "CSKA ". By the end of 70's, Vyacheslav had become one of the most experienced players. The hockey player played for "CSKA" 16 seasons. Then for many years he was the captain of his team, having played almost half a thousand matches and having won three USSR Cups. Fetisov is considered the most effective defender and hockey player of the Soviet Union.

1979 was a bad year for Vyacheslav. Severe back injury promised to forever bedridden the athlete. But he did not just get back on his feet, but also returned to sport.

In 1981 Vyacheslav was awarded the Canadian Cup. This was the only time in the history of the championship, when the cup did not stay in its homeland. Soviet hockey players played in mourning dressings and dedicated their victory to a legendary Valery Kharlamov, who died shortly before.

Until 1996 Fetisov again was the captain of the team. During this period Soviet hockey became so popular that "only a coward" did not play it. And the USSR team remained in the top three world leaders and became the favorite of the continent.

The famous "Larionov Five" - Vyacheslav Fetisov, Alexei Kasatonov, Sergei Makarov, Vladimir Krutov, Igor Larionov - were known to everyone who was interested in sports. And these five players were considered the best in the world.

Fetisov with his team twice became an Olympic champion.

In 1989 Fetisov signed a contract with the legendary club "New Jersey Devils." The hockey player got the opportunity to play in the NHL. This was the dream of all athletes, but only few of them reached such heights.

After some time, Vyacheslav continued to play in the team "Detroit" and twice won the prestigious Stanley Cup, and the legendary "five" played the leading role in the "Detroit". Fetisov received a membership in the honorary "Triple Gold Club" as a hockey player who won the Olympics, the World Cup and the Stanley Cup.

In 1999 Vyacheslav Fetisov played a farewell match in Moscow at the stadium "Olympic". His sports career was finished, and the legendary hockey player became a coach. Firstly, the second coach of "New Jersey Devils", and since 2000 he was training the Russian Olympic team.

Fetisov finally decided to return to his homeland in 2002. In Russia, he became the coach of the national team and became the head coach and manager of the team.

At the XIX Olympic Games in Salt Lake City, the Russian team received a "bronze".

Politics is a separate page of the biography of Vyacheslav Fetisov. It was not all so cloudless, as in sports. From 2002 to 2008, Vyacheslav Alexandrovich was a chairman of the State Sports Committee of the Russian Federation. He was responsible for the Olympics in Athens, Turin and Beijing. But Russia did not manage to regain the glory of the Soviet times during this period.

Vyacheslav Alexandrovich explained the failure by the fact that he could not work with loafers and losers, and all his endeavors met huge resistance. The officials did not like the criticism in their address, and they created the Ministry of Sport and Tourism, which was headed by Vitaly Mutko. Fetisov left the civil service and returned to his native club CSKA. But as not a player, but as a president. In parallel, Fetisov became a chairman of the Board of Directors of the Continental Hockey League.

On December 11, 2009, the former ice hockey player played hockey again. Vyacheslav Yurievich took part in the home game of CSKA in order to increase attention to the club. In the same year, Fetisov took the post of the head of the department of management of the sports industry of the RGU G.V. Plekhanov.

At the end of 2011, Vyacheslav Fetisov was elected to the Legislative Assembly of the Primorsky Territory, but refused the mandate. But later he helped to become a deputy to the popular actress Maria Kozhevnikova. Fetisov does not hide this fact and is proud that he opened the road to politics for a person who, according to Vyacheslav Yurievich, says the right things.

In 2012, Fetisov headed another hockey league, he became a chairman of the board of the Russian Amateur Hockey League (RLHL).

Leonid Reiser wrote a book about the legendary hockey player, and Vyacheslav Yuryevich released his memories called "Overtime". Not so long ago, the former hockey player made his debut as an actor: he played himself in the popular TV series "Molodezhka."

In 2014 Vyacheslav Yurievich approved the shooting of the four-part film "Fetisov", dedicated to his biography. The sportsman refused for a long time, considering that there are more worthy people then him, but, after all, he approved the project and told journalists that he wants to inspire children to believe in themselves, to show that you can achieve success through your work and talent.

In 2016, the former hockey player became the leader of his own program "Fetisov" on the channel "Star".

In January 2017, Vyacheslav Fetisov became the hero of one of the films in the series "Family Album", in which he told about his childhood, students, sports achievements, joyful and sad events of life.

Vyacheslav Fetisov is not only an ex-sportsman, but also a politician, a public figure. His status obliges him to look properly, but the fans of the hockey player believe that he looks too good for his age. Some believe that the famous athlete made a plastic surgery. Fetisov does not comment on these rumors. Not so long ago, he gave up smoking, which had good effect on his health and appearance.

His life the hockey player once and for all connected with the only woman Ladlena Sergievskaya. Currently, Lada Fetisova is the president of the charitable foundation "Respublika Sport" and, like her husband, is working to popularize sports in Russia. Ladlena has a popular account in Instagram, where she shares photos of her family life taken during the popular projects with almost 26 thousand followers.

The couple has a daughter Anastasia, born in 1991 in America. The girl graduated from the Russian school. She has a higher legal education. Nastya professionally engaged in two kinds of sports - tennis and equestrian sports.

Despite the long and strong marriage of the hockey player, the rumors about the illegitimate daughter of Fetisov appear in the press. According to this gossip, in 1988, just during the preparation for the wedding with Lada, Vyacheslav started relations with a singer Lyubov Isayeva. As a result of these relations, Masha's daughter appeared. According to Isayeva, the athlete knew about the child and was happy to have a daughter, as he wanted children very much. He visited a woman and a child, for ten years he made gifts and gave money.

Fetisov claims that he doesn’t know the singer personally. In 2002, Lyubov gave a detailed interview to "Evening Moscow" about her relationship with the hockey player. In the same year, Isaeva filed a complaint in the court. Fetisov refused to do a DNA test, which did not prevent his lawyers from winning the case. Numerous friends of the athlete witnesses on his behalf. 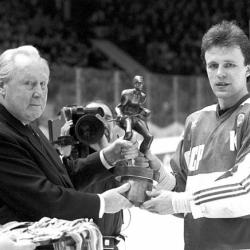