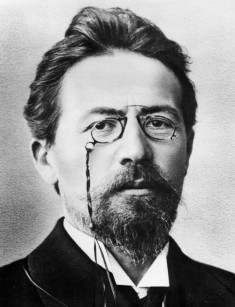 Anton Pavlovich Chekhov is the classic of the world literature, writer, playwright, doctor by training, academician of the Russian Academy of Sciences.

Anton Chekhov was born in Taganrog in January 1860. His father was a grocer who held a small colonial products store. Anton had four brothers and two sisters one of which died in early childhood. Chekhov’s mother, a calm family-oriented woman, was a daughter of a merchant.

Chekhov went to the Taganrog grammar school when his father ran away from creditors to Moscow. The would-be writer stayed in the hometown to complete his education. He lived with the new owners of the house and paid for his living by tutoring.

In his school years, Chekhov acquired his worldview and developed the love of books and theater. At that time, he wrote several early humorous stories. Since 13, the boy was infatuated with theater and even took part in putting on home plays for his schoolmates.

The first printed work by Anton Pavlovich appeared in 1880 in the magazine “Strekoza” (“Dragonfly”). Since then, Chekhov had been collaborating with the magazines “Budilnik” (“Alarm clock”), “Zritel” (“Viewer”), “Mirskoy Tolk” (“Mundane Talk”), “Svet i teni” (“Light and Shadows”). In the magazine “Oskolki” (“Fragments”), many Chekhov’s humorous stories appeared first: “Fat and Thin” 1883, “The Chameleon” 1884, “Overdoing it” 1885.

In 1886, in the periodical “Petersburg Gazeta” (“Petersburg Newspaper”), the Christmas story “Vanka” was published. The writer used the pseudonym “Antosha Chekhonte” in his first works.

In 1886, Anton Pavlovich received a job offer from St. Petersburg from the newspaper “Novoye Vremya” (“The New Time”). At this period, the writer created the short story collections “Motley Stories” and “Innocent Conversations.” As his works gained popularity, Chekhov started signing them with his real name.

The premiere of the new play “Ivanov” was in 1887 in Moscow. The young playwright’s artwork was first staged in Korsh Theater. With varied public reactions, the play was a success. Later, the play was staged in St. Petersburg with some adjustments. In 1888, Anton Pavlovich was awarded the half Pushkin Prize for his short story collection “At Dusk.”

In 1888-1889, the Chekhovy spent summer in Kharkov Governorate not far from Sumy. The death of one of the brothers made the writer escape the place where he lived with his relatives. Anton Pavlovich was going to visit Europe, but fate led him to Odessa where Maly Theater was touring. The writer attracted to some young actress, yet this feeling faded away soon. Apathetic, Chekhov went to Yalta.

By 1889, the writer had created the novellas “Drama on the Hunt,” Steppe,” “Lights,” and “A Boring Story.” The material for these works was gathered by Chekhov during his journeys. The writer became interested in visiting different places at the end of the 1880s when he stopped cooperating with the humorous magazines.

The desire to travel urged Chekhov to go to Sakhalin in 1890. The way to the island laid through Siberia where the writer stocked up on the material for his future literary projects. Considering the health condition of the consumptive person, the road was challenging for him. At the end of the journey, Chekhov created the collection of essays “From Siberia” and the book “Island Sakhalin.”

For numerous Chekhov’s art admirers, the novella “Ward № 6” stands out among other works. It was first published in the magazine “Russkaya Mysl” (“Russian Thought”) in 1892. The title of the novella became denominative – it means something abnormal or crazy. Many phrases from this book have become popular quotes.

In 1892, the writer’s old dream came true: he bought a country estate in Melikhovo and started living there with his parents and sister Maria who became a faithful guardian angel for her brother. After the purchase of the estate, Chekhov’s life transformed. Again, he had the opportunity to practice medicine – except literature, Anton Pavlovich had another passion, surgery.

During the Melikhovo period, Chekhov worked as a zemski doctor, built several schools, a fire station for peasants, and a bell tower. The writer ensured the road to Lopasnya was built and the railway station had a post office. Besides, Chekhov planted elms, oaks, and larches in the less dense parts of the forest; he also planted more than a thousand cherry trees. At this time, Anton Pavlovich opened the public library in Taganrog at his own expense.

Many famous works by Chekhov, such as “The Seagull” and “Uncle Vanya,” were created in Melikhovo. The tuberculosis exacerbation made the writer to leave the country estate for the south. In 1898, the playwright spent the winter in Nice; having returned from France, he bought a piece of land in Yalta. In summer 1899, Chekhov sold the country estate in Melikhovo and finally moved to Crimea.

At this time, Anton Pavlovich met his future wife. Olga Knipper spent July 1900 at Chekhov’s summer house which determined their further relationship development. In 1900, the playwright created the play “Three Sisters” where his spouse played splendidly. As the leading actress, Olga Knipper was also a success when “The Cherry Orchard” was staged in 1903.

In 1904, the playwright died. The play “The Cherry Orchard” was the last work of the Russian classic.

In 1969, the Soviet director Sergey Yutkevich created the movie about how the play “The Seagull” was made. The movie was named “A Plot for a Little Story.”

Using the facts from the writer’s biography, in 1991, Robert Long and Dmitry Frenkel created the musical “Chekhov” in the Netherlands.

Commissioned by the Moscow Government, the biographical drama “Farewell, doctor Chekhov!” telling the story of the playwright’s life was created in 2007.

In 2012, the movie about the relationship between Anton Pavlovich and Lydia Avilova was presented. “The Admirer” starred Oleg Tabakov and Kirill Pirogov, the famous Russian actors.

In 2015, the French director René Féret created the movie “Anton Chekov 1890” based on his own scenario. The young actor Nicolas Giraud played the Russian playwright. The plot is based on the writer’s life in 1885-1890.

The writer’s personal life is full of love stories. The relationships between Chekhov and his women could last for years, and the writer’s affairs were not sequential. The women often knew about each other, yet they did not rush to break up with their beloved.

In 1888, the writer was attracted to Lidija Mizinova. The 19-year-old girl was a friend of Chekhov’s sister. Lika wanted to become the writer’s wife, but all Chekhov wanted was to be free and independent – he never considered her as a possible spouse. However, it did not prevent Chekhov from giving her hope for almost ten years. He enjoyed her company but avoided speaking about marriage and household.

In the first years, Chekhov laughed at his possible rivals in front of Lika, thus leaving them no chance to gain the young woman’s favor. Later, Chekhov himself introduced Lika who was in love with him with the womanizer Ignaty Potapenko.

Mizinova entered into the relationship with the married man, got pregnant, and had a daughter who died in her early childhood. Chekhov used these facts – Mizinova was the prototype figure of Nina Zarechnaya in “The Seagull.” After complex and complicated games with Chekhov and Potapekno, Lika found comfort in her marriage – in 1902, she married the theater director Alexander Sanin.

In the 1880s, Anton Pavlovich met Elena Shavrova. The 15-year-old girl brought her short story manuscript to Chekhov and fell over heels in love with him. However, the girl realized that she had few chances to be loved back and married five years after their meeting.

In 1897, Elena went to Moscow to visit her relatives. She met Chekhov again, and they had a love affair. The lovers escaped to Crimea and spent some time in Yalta; in the end, they split up. Chekhov wrote her about 70 letters – more than to any other woman he loved. In the short story “The Lady with the Dog,” the writer portrayed Shavrova as the female character.

In 1898, at “The Seagull” premiere, the playwright met his old acquaintance Nina Korsh who had fallen in love with Chekhov at 12. She did not miss the chance to mesmerize the writer, and Anton Pavlovich got attracted. As a result, Nina became pregnant. The writer is considered to have no direct offspring, but in 1900, his daughter Tatyana was born. Chekhov did not know about it since he left Nina for Olga Knipper, and Korsh never told him about her child. Afterwards, Nina and her parent went to Paris. Tatyana Antonovna followed in the footsteps of her father and became a doctor.

Olga Knipper was the woman who managed to persuade Chekhov to marry her. They met in 1898 during one of “The Seagull” rehearsals. Olga was a beautiful, charming woman and actress. The couple had no children. Knipper was pregnant, but no successor was born.

The letters from Chekhov’s archive give an ambiguous impression concerning his marriage to Knipper. Olga did not leave the stage, and Chekhov lived in Yalta most of the time, managing his tuberculosis episodes. The love story of the writer and his wife began with mutual feelings and beautiful courtship, yet it grew only into the epistolary novel with occasional meetings.

Chekhov’s friends believed that if he had not married Olga he would have lived longer and happier. However, the denouement of this story was not as dramatic as it could have been: in the last days, the playwright’s wife was by his side, not touring.

Chekhov had tuberculosis. For the first time, he discovered the symptoms of consumption at 24. Since 1885, his sickness became more apparent: according to the writer’s memories, the temperature was accompanied by coughing blood. In his youth, Anton Pavlovich did not have treatment for tuberculosis – he thought the symptoms were the signals of another disease.

Later, the writer used to hide his poor physical condition from the nearest and dearest – he did not want to disturb his mother and sister. By 1897, the playwright was seriously ill, and he had regular bleedings in his right lung. This fact made him undergo examination conducted by doctor Ostroumov.

To study Chekhov’s disease symptoms, he was hospitalized. The doctors made the diagnosis and prescribed treatment. As long as the writer felt better, he started asking to let him go home – he wanted to continue his literary work. In 1898, coughing blood lasted for several days, yet he disguised this fact from his family.

The pain that had become an integral part of the writer’s life was also present in his characters. It is particularly evident in his work “The Story of an Unknown Man.”

The writer was prescribed visiting various health resorts the road to which was sometimes too heavy for a sick person. Living in Yalta extended his life till his marriage. As Ivan Bunin believed, his wife undermined his health with her frequent departures. She did not get along well with the writer’s sister Maria which gave more reasons to worry. Shortly before he died, Chekhov and his wife went to the resort in South Germany.

In summer 1904, in Badenweiler, the writer passed away. The reason of Chekhov’s death was tuberculosis. It began when the playwright felt worse than usual. When a doctor came, Chekhov was sure he was dying. He asked for a glass of champagne, had a drink, and died. 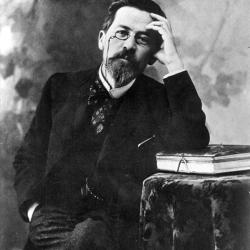