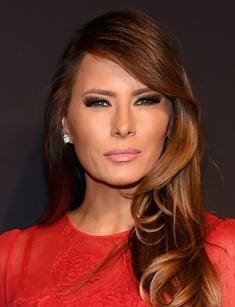 Melania Knavs, better known as Melania Trump, is the First lady of the USA. She is married to 45th President of the United States, Donald Trump. Speaking of Melania Trump, it is important to say that her biography related not only to her famous husband. When she was young, she achieved considerable success as a fashion model, also she posed for men's magazines. In addition, the new first lady made attempts to become an actress and starred in comedy "Zoolander" by Ben Stiller.

The wife of Donald Trump was born in 1970, in Sevnica, Slovenia. At that time it was a part of Yugoslavia. Melania's father, Victor Knavs, repaired and sold out used cars, and her mother Amalija worked at a local textile factory. As a child, Melania Trump lived in a poor neighborhood, in a building surrounded by factory chimneys. Knavs family was quite poor.

But at the same time the girl has always distinguished perseverance, commitment and discipline. She was a very good pupil at school.  Her teacher and classmates recall that Melania Knavs was always polite, and no one heard from her bad words. After school, she moved to the capital of Slovenia, where she became a student of the Faculty of Architecture in University of Ljubljana

But she didn’t finish the university: soon she met a professional photographer Stan Erko, who persuaded a beautiful girl to begin a career in modeling. Six months later Melania Knavs change her surname to the Western manner, and under the name Melania Knaus goes first to Milan and then to Paris.

In the second half of 90s photos of Melania Trump were published in America, where she moved for permanent residence and moved to New York. She continued a successful career as a model lady  and at the same time she made attempts to become an actress. Future wife of Donald Trup appeared in comedy "Zoolander" directed by Ben Stiller, but her name didn’t appeare in subtitles.

In 2010, the year of Melania launched her own jewelry collection. Her brand gradually conquered the world. Besides the jewelry Trump created design for wristwatches, and also produces perfume and cosmetics for women.

In 1999, during a photo shoot for «Allure» magazine the model met Donald Trump. This meeting changed Melania Trump’s life completely. They started dating, and the public found out about Donald Trump and Melania relationships during their performance on the radio show «The Howard Stern Show». The future US president called the girl "love of his life."

In January 2005, the wedding took place in Florida and Melania became a wife of Donald Trump. It is interesting, that Hillary Clinton, the future opponent of Donald Trump in presidential race, attended the wedding ceremony. As a wedding gift, their friends sang a song «The Lady and the Tramp», the original composition was a song from the Walt Disney cartoon "Beauty and the Beast."

The wedding ceremony was widely covered by the media. The public was attracted by luxurious ceremony.  Melania wore a $200,000 dress made by Christian Dior. The wedding cake, the height of which was more than 15 meters, was decorated with three thousand pastry roses.

A year later, their son, Barron William Trump was born. It was the first child for Trump’s the fifth child of Donald. from two previous marriages president Donald Trump has sons Donald Jr. and Eric and daughters Ivanka and Tiffany. Father and mother devoted to Barron 20-minute speech on the radio show «Imus in the Morning».

Melania, as well as many other successful women, is a big fan of fitness. She loves cardio and pilates and tennis. At the same time she does not keep to any diet, and eats fried and sweet food, including her favorite ice cream.

Elections 2016 and the scandal

During her speech at the Republican National Convention in 2016. Mrs. Trump expressed support for her husband as a candidate for the US presidency. Her speech was a success, but later journalists compared the text of her speech to the speech of Michelle Obama, wife of Barack Obama,  which the latter made eight years ago, said.

It turned out that the whole paragraphs coincide almost word for word. However, representatives of Trump rejected the accusation of plagiarism.

However, in any case, the performance did not prevent Melania become the new first lady of the United States after the election results were announced in November 2016. 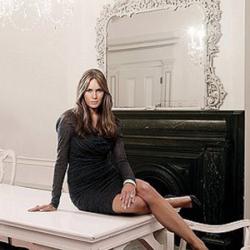