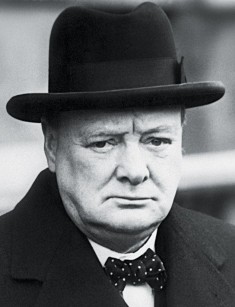 Winston Churchill is one of the greatest and ambiguous political figures of the 20th century. His played a significant role both for Britain and the whole world’s politics, but the modern society views it ambivalently: some admire the politician’s personal courage and actions, others are disgusted by his position that only the white could rule the world.

Although Churchill openly fought dictatorship in the battlefield, he did not keep in secret his liking of Benito Mussolini’s and Joseph Stalin’s activities – these two figures were the founders of totalitarianism and cult-of-personality governance regime in Italy and USSR.

Winston Leonard Spencer-Churchill was born on November 30, 1874, in Blenheim Palace, into the family estate of the Dukes of Marlborough. His parents were wealthy and influential people: the father Lord Randolph Henry Spencer was a famous politician and the Chancellor of the Exchequer, and his mother Jennie was the rich American businessman’s daughter.

The future politician was the first child, but he was deprived of parental attention because his father was busy with his political career and his mother led a social life. The nanny Elizabeth Ann Everest brought up young Winston and became his closest person.

The would-be Prime Minister of Great Britain became the member of the “high caste” of the privileged right after his birth. It could be an obstacle for the splendid political career: the noble had no right to be the members of House of Commons and the country’s government. However, Winston belonged to the lateral line of the Churchills which gave him the opportunity to become a great politician.

At 7, Winston was sent to a boarding St George's School where more attention was paid to discipline rather than students’ education. At school, Winston demonstrated his reluctance to study for which he often received spanking with a rod. After the nanny who regularly visited him noticed marks of beating on the boy’s body, she insisted that Churchill should be transferred to another school.

However, the boy did not like studying at Brighton school as well: he was the last student of the class in discipline. At 12, young Churchill had serious health problems: pulmonitis weakened his organism. For this reason, he did not go to Eton College as men in the Marlborough family usually did and entered the equally prestigious college at Harrow. This choice was explained by the schools’ geographic positions.

At this school, Churchill continued to be indifferent to subjects – he learned only what he was interested in and stubbornly ignored the rest. Because of this, he was transferred to the “military class” in 1889.

The class program was focused on military science. This is where the obstinate student Winston became industrious. He managed to become one of the 12 graduates who could pass the final examinations in all subjects. It gave Churchill the chance to enter the most prestigious military school in Britain which he finished as a second lieutenant.

In 1895, Churchill was commissioned to the Fourth Hussars regiment of the British Army. In the course of time, he realized that he was not attracted to the military career. Thanks to his widowed mother, Winston was assigned to Cuba as a military correspondent and remained in the active military service. The debut in journalism not only brought fame and social recognition to the would-be politician but also gave him the chance to earn the first significant money – 25 guineas.

Apart from the glory and money, Churchill took two habits from Cuba that he preserved through all his life: smoking Cuban cigars and siesta which implied the after-lunch rest. In 1896, he continued his journalist travel: he was sent to India and later Egypt. Churchill showed his military courage: in addition to describing the events, he personally took part in battles and faithfully performed his military duties.

In 1899, Winston Churchill decided to resign and devote himself to politics. At that moment, he was a famous journalist, so he could count on public support. The first attempt to become the member of the Parliament with the conservative party failed – the voters preferred the liberals.

Churchill put off politics for a while and went to another journalist travel. He was sent to South Africa where the Second Boer War took place. He was captured by the enemy but made a daring escape. It was the golden opportunity for Churchill as a politician: people promised to vote for him regardless of their political views. With all that, Churchill decided to go back to the battlefield where he participated in many operations to save his fellow citizens from the prison where he had been kept.

Churchill’s courageous adventures made him a real hero when he returned to the home country. He easily won in the parliamentary elections in 1900 and became the member of the House of Commons where he had a seat for the next 50 years. In the same year, he published his only literary work “Savrola” in which, as historians believe, the politician portrayed himself as the protagonist.

Since his first days in the Parliament, Winston Churchill severely and directly criticized conservatives and expressed his disagreement with the program of Joseph Chamberlain, the main ideologist of the country. Because of this, the future Prime Minister of Great Britain left the Conservative party 4 years later and switched to the liberals – this step helped him climb the political ladder promptly.

At first, he became the Under-Secretary of State for the Colonies, then the President of the Board of Trade, the Minister of the Interior. In a year, Churchill became the Secretary of the Navy. Thus, he became the youngest politician who took the most important positions in Britain.

When Winston Churchill was governing the Department of the Navy, he failed miserably. The military operation in the Dardanelles during the First World War led to the catastrophe due to his fault: 250 thousand of English soldiers died unreasonably.

In order to make amends, the politician resigned and volunteered to the battlefield. In several years, the passions related to the Dardanelles cooled, and Churchill returned to the government to take the position of the Minister of Munitions. However, he could not show his worth there and had to call a “political time-out” to stand back from all political activities.

The Prime Minister of Great Britain

Winston Churchill’s comeback to politics was marked with the beginning of the Second World War when Germany invaded Poland and Great Britain declared war on Adolf Hitler. Churchill was offered the position of the First Lord of the Admiralty since he never promised eternal peace in his country and was one of the few persons who could bring the nation to the victory, as the authorities believed.

As Churchill took the major means of control under the country’s mobilization and directed them to the fierce struggle against Hitler’s Germany, he managed to climb the top of power and became the Prime Minister of Britain – however, at the most difficult period for the country. Still, his determination, tenacity, and sober situation assessment helped the British Prime Minister successfully conduct the war to the victory by creating the triumphant coalition with the USA and USSR.

The ardent anti-communist, Churchill had to prefer Stalin to Hitler because there was no other way. In May 1942, Churchill, the American President Franklin Roosevelt, and the Russian leader Joseph Stalin signed an important agreement on the anti-Hitler coalition creation. The Atlantic Charter determined the economic and political world order in the ally countries after the victory in the World War II.

In 1945, the British, American, and Soviet leaders participated in The Yalta Conference and specified the political map of the world in the post-war epoch. The Big Three decided that Germany should be subdivided into 4 occupied territories; the USSR would get back Baltic states, Western Ukraine, Belarus, Bessarabia, Bukovina, and Karelia. At that time, the Soviet Union also pledged to take part in the war with Japan. In lieu of it, the USSR would receive southern Sakhalin and the Kuril Islands.

The world split into two political systems right after the Second World War was over. Churchill began to encourage the Western world to unite against the communist East to choke Bolshevism completely. However, he had to leave the big politics because serious economic problems occurred in Great Britain in the post-war years: the external debt increased, and the relations with the neighboring colonies deteriorated. With the defeat in the Parliamentary elections, Winston Churchill resigned.

At that time, he led the opposition and almost never appeared in House of Commons. He devoted himself to the literary activities. In 1951, 76-year-old Winston Churchill became the Prime Minister of Britain again and ruled the country for the next four years. He spent the latter years of his political activity on the foreign politics with the emphasis on the country’s nuclear potential development since he hoped to gain the former power of Britain by this means. For medical reasons, the British politician had to resign and left the position of the Prime Minister with full honors.

Many historians compare Winston Churchill’s personal life to a “beautiful romance novel.” The great British politician met the love of his life in 1908 and married her at once. It was Clementine Hozier, the daughter of the London nobles. The Prime Minister and his wife happily lived together for 57 years. The wife became his best friend and main political counselor since Churchill made important decisions only with her approval.

The politician’s wife was 11 years younger – it was considered a big gap at those times. Nevertheless, she managed to store love in the family and became the only person capable of handling Churchill’s sharp and turbulent character. Clementina gave birth to 5 children each of which was wanted and loved by their parents. After the Prime Minister’s death, his wife continued to call him an ideal husband even though he smoked like a chimney, gambled, and spent nights in casinos.

After the funeral, Clementine lost the meaning of her life and was ready to follow her husband, but the catchphrase that Churchill pronounced during the Second World War stopped her – he encouraged Britain to “never give in.” This speech helped Clementine overcome the loss and continue the literary activity for 12 years publishing the British leader’s unfinished memoirs.

Winston Churchill passed away on January 24, 1965. The greatest Englishman in the history of the country died at the age of 90. The cause of death was a stroke that had already attacked the former British Prime Minister. It was the state funeral: the Queen Elizabeth II governed it. In the course of history, only 10 persons were honored this way.

The funeral ceremony became the largest in the history of the country: the representatives of 112 countries and all members of the royal family were present. The funeral was broadcast live on many TV channels all over the world which gave almost 350 million people the opportunity to say farewell to the outstanding person via TV screens.

According to Churchill’s will, he was buried in Bladon cemetery near the St. Martin’s church not far from his family estate. Only Churchill’s family members and close friends were present at the ceremony. 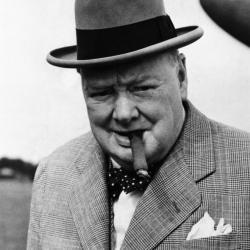