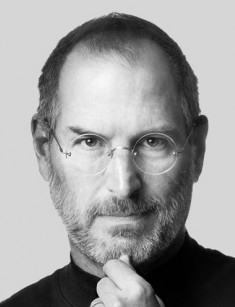 Steve Jobs was born in the mid-1950's in San Francisco, California. His father Syrian Abdulfattah Jandali was a teaching assistant at the University of Wisconsin and his mother Joanne Schieble was a young student of the same University. His mother’s relatives were Germans. Joanne and Abdulfattah were not married, the girl’s family was against their relationship. Therefore, Steven’s mother was forced to give birth in a private California clinic, and then to give a son for adoption to foster parents.

Paul Jobs and his wife Clara could not have children and they gladly adopted the child. The biological mother put forward the only requirement that the boy must get a higher education.

Two years later, Steve had stepsister Patty. She was also adopted by Paul and Clara. The family soon left San Francisco and moved to the small town of Mountain View. Paul Jones, who was a mechanic, could easier find a good job there and earn money for payment of children’s college education. Paul tried to foster interest in mechanics in his son, but Steve was much more interested in electronics. Moreover, Mountain View is the center of high technology, thus Steve’s future was decided in early childhood.

Steven Jobs had big problems with teachers in elementary school. The education system seemed boring, formal, and soulless to the child. It was until a teacher could find the correct approach to the student, the boy began to study diligently and even skipped the next two years in grade school. Steve attended the course of electronics in high school, made electronic frequency indicator by himself, and even worked on the assembly line in the famous Hewlett-Packard company.

When the boy was 16, he began to get tough with parents, especially with the father, due to his interest in hippie movement and the music of Bob Dylan and The Beatles, smoking marijuana and taking LSD. Then Steven met his namesake Steven Wozniak, who was five years older. Guys became best friends, as both were fond of computers and electronics.

The first joint invention of Jobs and Wozniak was born when Steven was only in high school. They made a device called “blue box”, aimed to crack telephone networks by generating the necessary tones. First, the guys were just having fun but then began to sell their product and make good money.

In 1972, Steve Jobs entered Reed College which was an independent liberal arts college and had an intense curriculum. Steve Jobs dropped out of college six months later because he saw no point in wasting time on mindless lessons. Eastern spiritual practices, vegetarianism, veganism and Zen Buddhism attracted him much more during this period.

Steven began to work as a technician in the start-up Atapi company, which was engaged in the production of computer games. At the same time, Wozniak was working on the creation and improvement of boards for his own personal computer. When Wozniak began to implement the idea, Jobs offered him to create a joint computer company. So they established the company that later turned into the legendary Apple. While working on the first version of the Apple I computer, Steve Jobs showed himself as an authoritarian, somewhat tyrannical and aggressive head, but at the same time, he had good organizational skills.

The first computer was primitive and it resembled an electronic typewriter. But in 1976 Wozniak developed a new board that already had color, sound, and could connect external storage devices. And Steve Jobs put his leadership qualities for the promotion of the device and could reorient the production and create computers for inexperienced users.

It was his idea to create a nice plastic case and a neat appearance of the new Apple II. Jobs also hired a professional PR manager Regis McKenna, and the new computer became known everywhere.

The Apple III, Apple Lisa, and Macintosh came later. From a commercial point of view, the firm prospered, but there were discord and scandals among the leaders, largely due to Steve Jobs’s bad temper.

NeXT company and Pixar Studio

As a result, he was suspended from work, and in 1984, Jobs left his own company, but immediately organized a new NeXT Computer company. This computer company offered only advanced new products, which were a little ahead of time. But, they were too expensive for the mass market as well as the latest invention of Apple.

At that time Steve Jobs, who was interested in computer graphics, bought George Lucas’s Pixar Studio for $ 5 million. Initially, his idea was to use animated films as advertising of NeXT computers. But in the 1987 animated film, Tin Toy won the Oscar Award, and Jobs changed his opinion. Later this Studio released such famous animated feature films as Toy Story, Monsters, Inc., Finding Nemo, the Incredibles, Cars, Ratatouille, and others.

In 2006, Steve sold Disney Pixar for 7.5 billion. However, he remained its shareholder.

In 1996 Steve Jobs sold NeXT to his first company almost for half a billion dollars and returned to Apple as an adviser to the Chairman.

Jobs' first achievement was the mass production of a new all-in-one iMac computer, which distinguished with its unusual futuristic design. This device became the best-selling computer in Apple's history, and about one-third of the devices were bought by users who had not previously owned computers. So, Steve Jobs could find the company’s new target audience.

The second successful step was the establishment of Apple Store, a specialized retail store which sells the production of Apple.

Steve Jobs’s uniqueness was that he not only kept up with the time but also created new time and dictated the laws of fashion in the IT industry. Realizing that the new age is becoming fast, he started manufacturing of miniature but perfect in their capabilities devices: iTunes media player, iPod music player, iPhone touchscreen phone, iPad tablet computer. Each device appeared earlier than its analog that imposed norms and terms to the competitor companies.

There are many books and a large number of documentaries and feature films about Steve Jobs. The most interesting publication is the authorized biography “Steve Jobs”, which was released in 2011. The author is an American journalist Walter Isaacson.

The most interesting films are the documentary Igenius How Steve Jobs Changed the World, which was made by the Discovery Channel, and the feature film Jobs, where Ashton Kutcher played the role of legendary Steve Jobs.

Steve had a lot of love affairs in his youth, as it was typical in the hippie culture. The first notable woman in his life was Chrisann Brennan. Their relationship was difficult, the couple often quarreled and broke up. In 1978, Chris gave birth to daughter Lisa Brennan, but Jobs first did not consider himself her father. But he admitted the paternity after the DNA test.

He later had relationships with Barbara Jasinski, who was engaged in advertising, folk singer Joan Baez, computer consultant Tina Redse. He broke up with Tina after the girl refused to marry him.

The only businessman’s wife was Laurene Powell, who was a bank employee at the time of their acquaintance. It is interesting that Jobs forgot about the bride for a few months after making an offer in 1990, as he threw himself into another business project.

However, in March 1991, Steve and Laurene got married, and in September their son, Reed was born. Four years later they had daughter Erin and in 1998 little Eve. It is wondering what Steve forbade his children to use a computer long, limiting the time of use of iPhones and iPads.

In the mid-1980's Steve Jobs found his biological mother and met his sister Mona, and maintained with her friendly relations.

Steve Jobs held his last public speech on June 6, 2011. The businessman was diagnosed with pancreatic cancer a few years before. He fought with the disease in different ways, including alternative methods, but the disease won.

Steve Jobs died on October 5, 2011, surrounded by his family. 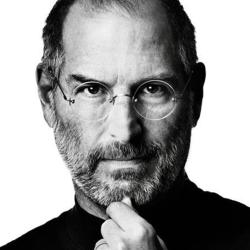