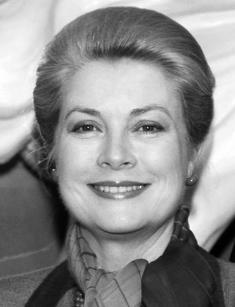 Who is not familiar with the fabulous love story of the titled Prince and a simple American girl among our contemporaries? Of course, the girl was not quite simple and there are still rumors about the truth of feelings of the couple but this story is an example of how a fairy tale turns into reality.

The incredible fate of Grace Kelly, her transformation from a rich but simple American woman into an example for millions, the Princess of Monaco, that's what people are still gossiping about.

The future style of an icon was born in 1929. The girl was trained to life in high society among the rich and famous people from childhood. Grace was the daughter of a successful businessman and model. However, she was trapped, a little chubby, not too confident and not very promising for a great future as a child. The girl graduated from a strict Catholic school, where she first appeared on the stage in a production, based on biblical history. The fate of the sweet wife of a rich man waited for Grace but she wanted to gain fame and to be involved in acting.

Grace had older brothers and the older children who were made the main bet in the family. The father of Grace did not expect that his youngest daughter would become the main pride of the family and bring fame and additional wealth to their home, glorifying the name Kelly among the inhabitants of several continents. Grace spent many years, trying to impress a demanding dad and make him take her seriously. But it did not happen when she received the Oscars.

Young Kelly moved from Philadelphia after graduation from school, entered the New York Academy of Art (in the women's college, on which her parents insisted, she was not accepted because of low grades in mathematics), where she began to comprehend the basics of acting. She worked as a model and succeeded in this direction, her photo was decorated with numerous magazines, on the pages of which she promoted brands of cigarettes, appliances, sportswear and household chemicals at the same time.

An interesting fact that Grace was offered interesting projects and high fees unlike the success stories of other models, who was on the doorstep of well-known agencies and had a lot of castings for years. She was beautiful, so the agents lined up in front of the door to the girl's apartment and offered her the best conditions for cooperation.

The canonical beauty of Grace, tall and chiseled figure, these characteristics, which made her a legendary actress and model, she was liked all the producers without exception. But she didn't get a job at the cinema. Finally, she gets a role in a Broadway play and then starts to conquer the cinema, receiving the invitation for cameo roles in different films.

Grace meets the famous actor Gary Cooper, who helps her to get the main role in his new project. So Grace begins the solemn conquest of the American cinema. However, Grace was shocked after the premiere when she noticed how badly she plays and rushed to the teachers to develop her acting skills. She starred in several films after a while, for the role of the second plan in one of which she receives her first nomination for the Oscars.

Kelly becomes the muse of the famous director Hitchcock, his "favorite blonde," starred in his films and won the Oscars. She starred in 10 films for five years.

The success of Grace Kelly is phenomenal. She did become not only the most popular diverse actress in Hollywood in the shortest possible time but also retained her position as the brightest star of cinema many years later. She entered the lists of the best actresses since the beginning of the decade and the century, brought fame to herself and her family.

Kelly presented the best Hollywood movies at international competitions (including the Cannes Film Festival, where she met Prince Rainier III). By the way, she was credited with affairs with all partners on the set, with the Arab Sheikh but she decided to link her life with the Prince of Monaco.

The reception organized by the Prince of Monaco for the representatives of American cinema became crucial. Young "Oscar-winning" actress with her stunning beauty struck Prince Rainier III in the heart immediately. He decided that he met his Princess, which he had been looking for so many years and began the process of winning the girl's heart immediately.

Grace was fascinated by the courtship and attention she received from Prince. He showed himself as an attentive and well-mannered fan. They had a long correspondence across the ocean and Rainier came to America.

Grace understood that the decision to link her fate to Prince would make her Princess, it impose an incredible responsibility on her and become a turning point in her career and life. However, she was ready to exchange all of her career achievements on the role of the wife and the sweetheart of Prince. Grace gave up her passion for the cinema for love.

Rainier came to America to ask her parents for her hand in marriage, he received the blessing of new relatives and took Grace and her friends, a hairdresser and many suitcases, containing her wedding dress and jewelry on a transatlantic liner to Monaco. The traditional wedding took place, after which the inhabitants of Monaco was presented to their new Princess a week later.

The family settled in Monaco, a small state began to develop its tourism potential and gradually became a must - visit place for ardent fans of cinema, Hollywood and just lovers of romantic stories after the arrival of Grace. Grace and Rainier became the parents. They had children. The family looked perfect: a beautiful, well-groomed wife; a sedate, dignified-looking husband with exceptional manners, who was distinguished by an aura of power and royal belonging; wonderful children, who were educated and obedient.

However, the idyll did not last long. Children, who were submissive and exemplary in childhood, began to get out of control as they grow up. The son ceased to be interested in anything, narrowing his circle of interests to the representatives of the beautiful half of humanity and fashionable cars. The eldest daughter experienced her first crazy marriage at her young age and then the same insane divorce. The youngest daughter decided to exchange her feminine outfits for a leather jacket and motorcycles, becoming a real "kid."

Kelly's husband pumped up over the years. He began to show those features that come to people usually in old age. For example, he became excessively grouchy, stingy, loved to spend time away from his family, alone or surrounded by his favorite animals. He moved out of the family in a separate house.

Moreover, unsociable Rainier was jealous of his wife to her success and consensual love during their joint life. Grace was a favorite of the country, successful in all endeavors. Her husband could not forgive her this fact.

The image of the perfect family that Grace built over the years was collapsing like a house of cards right in front of her eyes. And she felt it extremely painfully. She was well aware of her need to continue to create and realize her potential as a dramatic actress but it was impossible in her position, her age began to approach the fatal mark for her.

She had an affair with a young man. She had a relationship on the side with a young man than with another one. It gave her certain freedom and a feeling that she could make at least some important decisions and influence her destiny.

The actress had a peculiar attitude to the process of growing up and aging. She always believed that women have a miserable existence with 40 years. In her youth, Grace took care of her young beauty and fit figure, she used her data and her charm as well as possible and received dividends from her appearance, working as a model, actress and just being a "heartbreaker."

As she grew older, she became aware of all the ghostly and elusiveness of her natural beauty, which will soon begin to fade with each passing day. She was terrified of the first signs of aging, she was very upset because of the approaching "fatal" age. The inability to be the ideal, the ideal of beauty, youth, grace, smoothness and incredible charm, was comparable to death in her understanding.

The sad fact is that Grace did live in her old age, as she feared. She did not sit in her old age and remember her past victories. She died suddenly in a car accident. Grace Kelly had a net worth of $40 million.

What the mother and daughter said that day would remain a mystery. It happened that Grace lost control on the road because of a sudden heart attack and was in a car accident, where she died at the age of 52. Her daughter suffered too but survived. Grace's husband wore mourning for his wife until his death.

The style of icon

Grace Kelly was considered an icon of style during her lifetime. Her dresses were copied, her images were disassembled into components and analyzed in fashion magazines, her ability to wear gloves with unique grace was admired by the best fashion designers. She like no one else was able to emphasize all her advantages to create a perfect shape of her figure with the help of clothing and accessories and she chose outfits for any celebration.

Grace gave preference to "Hollywood chic" and the classics of the "red carpet" in the days when she was a star of cinema, then, she transformed her image, added to it more elegant, but modest things, becoming Princess of Monaco. But her favorite clothes were always hats with wide floors and clothes of soft pastel colors.

Grace's history made a huge impact on popular culture. Her style was interpreted at fashion shows, her words were scattered in quotes and aphorisms and her fate became a source of inspiration for directors and writers. The design accessories, dresses and jewelry are called and renamed in her honor. There is a perfume created in honor of Kelly.

In 2014, the film Grace Of Monaco was released, which told about the formation of Grace in the role of the head of the state. The famous actress Nicole Kidman played the aristocrat not by birth but by choice. The image of Kelly was played in this film as a woman almost unearthly, like an angel, in the soul of who the fire was burning.

Grace was far from a gift. By her admission, she was an ordinary woman, not a fairy-tale character. According to contemporaries, Kelly was very liberated, lived with passions, was not afraid of the evaluation of society and knew her worth. Moreover, she was adventurous and incredibly lucky, how else can you explain her sharp rise to the podium in the cinema, the wedding with Prince on a white horse and a lot of happy accidents and coincidences.

Grace hoped that the story of her life would be a story about a not-perfect woman, who was lucky. However, it turned out quite the opposite. She became the ideal woman for many generations.

Grace is very similar to another famous actress, the inimitable Catherine Deneuve. It played into the hands of Catherine at the initial stage of her career.