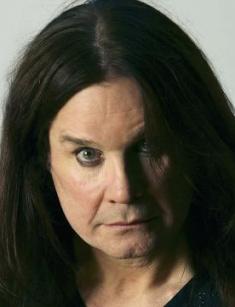 Ozzy Osbourne is a British rock musician and one of the founders of the iconic group Black Sabbath that originated hard rock and heavy metal styles. The musician is considered the “godfather” of heavy metal; he is included in the UK Music Hall of Fame.

John was born in Birmingham, Great Britain, into a large family; he was the fourth among six kids. They had to live in a three-room house; the parents could not allow themselves a larger residence. The would-be artist’s father, John Thomas Osbourne, worked night shifts as a toolmaker for General Electric; the mother, Lilian, was employed at the same company and worked in the day time.

Ozzy got his nickname as an elementary school student. It was a form of his second name combined with the name of the fairy tale country Oz; the boy loved that story.

Because of the family’s financial ordeals, John could not finish school; he quitted at 15 and got hired as a plumber’s assistant. However, he was fired soon. The young man changed many jobs, from a slaughterhouse worker to a grave digger, but failed to maintain a permanent position.

The financial hardships made the young man choose the wrong way: John Osbourne attempted burglary and got caught. He spent several months in prison and gained his first tattoo on his left hand’s fingers: “OZZY”.

When Osbourne was released, he decided to fulfill his childhood dream and become a rock star. The 14-year-old teenager dreamed of the stage when he heard “She Loves You” by The Beatles. Soon, John became a vocalist of a young group Music Machine; he gave two concerts with it.

Further on, Ozzy created The Polka Tulk Blues Band and pinned an advertisement in a local music store to gather together beginning musicians. Soon, the group was renamed into Earth. They had to change the name again, though: when the musicians joined a music contest, another group with the same name appeared. The new option was “Black Sabbath”, the allusion to the popular horror shown in movie theaters at that time.

Initially, the artists performed covers on hits; they created the debuting song in 1969. In February 1979, it took them three days to record the first album. Today, Black Sabbath is the heavy metal classic; still, it reached only the eighth position back then.

The young people did not procrastinate and presented the second album six months later. Paranoid conquered Europe and America and made the group internationally popular. It was the anti-war work; many songs openly disapproved of the events in Vietnam, and US radio stations stopped broadcasting them. Nevertheless, it did not prevent Paranoid from success: more than four million copies were sold. It is funny that its lead song, that became the greatest hit of Black Sabbath, was written at the last moment: there was not enough material for the full-fledged album.

Ozzy Osbourne collaborated with Black Sabbath until 1977 and recorded five studio albums; he left for a year to come back in 1978 and participate in Never Say Die! Finally, he was excluded from the band because of his alcohol and drug abuse; the vocalist of Rainbow, Ronnie James Dio, replaced him.

In 1997, the original members of Black Sabbath reunited and gave several shows. However, fans had to wait for Ozzy’s solo album until 2013 when 13 came out.

When Ozzy left the group, he spent pretty much time doing nothing. Finally, Sharon Arden, the daughter of the musician’s former manager, persuaded Osbourne to create his own project. The man invited musicians and began to give concerts and record albums; it was the new page in his career.

The first album, Blizzard of Ozz, was released in 1980 and proved to be popular. “Crazy Train” is special for the whole rock music. Although it did not reach top positions in charts, it remains Ozzy’s trademark song until the present days. The majority of the musician’s collection albums include this track, and the ringtone is among the ten popular tunes for mobile phones.

At the beginning of the 2000s, Osbourne presented several versions of the song “Mr. Crowley” devoted to Aleister Crowley and the music video.

The song “Suicide Solution” caused another scandal. Ozzy Osbourne claimed he wrote the lyrics about the harm of alcohol and compared this dependence to committing suicide. In 1986, a 16-year-old teenager put an end to his life after listening to this track many times. Osbourne had to go to the court, but his lawyers proved there were no suicidal calls there.

In 1991, Ozzy recorded “Mama, I'm Coming Home” devoted to his spouse, Sharon. As the artist told journalists, the wife not only inspired him to new art but also helped him overcome alcohol dependence. The track was included in the top 40 songs in the USA.

Osbourne often collaborated with other rock stars. For instance, Ozzy and the guitarist Steve Vai recorded several songs; however, only “My Little Man” appeared on the 1995 album Ozzmosis. The music video for the single “I Just Want You” from the same album was also presented. Ozzy and the group Therapy presented the cover on the 1970s hit “Iron Man”.

In 2001, Epic presented the musician’s studio album Down to Earth famous for the songs “Gets Me Through”, “Facing Hell”, “No Easy Way Out”, and the video “Dreamer”. The eccentric artist surprised everybody again and put his own X-ray to the cover. The next year was marked with the album Greatest Hits with the popular solo compositions.

All in all, Ozzy Osbourne has contributed to rock music development a lot. The singer is one of the founders of heavy metal. Classic Rock and Kerrang! magazines named him “Living Legend” in 2009 and 2011 correspondingly.

The musician’s popularity leads to funny situations sometimes. The 2004 survey about the most suitable person to represent humanity and greet aliens demonstrated that more than half of respondents chose Ozzy Osbourne; the man surpassed George Bush, David Beckham, and other celebrities.

The singer is known for his weird and bloodthirsty tricks. When he was meeting recording company managers who were going to collaborate with him on the debuting album, Osbourne brought two snow-white doves. He was supposed to let them fly high in the sky; in fact, the musician bit off a bird’s head.

Ozzy often threw pieces of meat or tripe at people during his shows. One day, the man was going to bite a bat’s head and to do the same. Still, the animal injured him, and Osbourne was hospitalized. When he recovered and left the hospital, he started barking like a dog.

Ozzy married his first wife, Thelma Riley, when he was 21. Two children were born in this family: the daughter Jessica Starshine and the son Louis John. Besides, the artist adopted his wife’s son from her first marriage, Elliot Kingsley. The couple spent 12 years together and split up because of Osbourne’s alcohol addiction.

The next year, Ozzy married again; his second wife, Sharon Arden, became his manager. The spouses have three kids: Aimee, Kelly, and Jack. Besides, they adopted Robert Marcato whose deceased mother was the family’s friend.

In spring 2016, Sharon discovered her husband was cheating on her and filed for divorce. Soon, Ozzy Osbourne publicly announced he was a sex addict. The family decided the singer should undergo a treatment course; Sharon postponed the break-up.

The artist began to abuse alcohol and drugs at 18; by 40, he was diagnosed with chronic alcoholism. Ozzy tried to recover many times and voluntarily attended rehabilitation centers; he quitted the bad habit at the beginning of the 21st century.

Ozzy Osbourne is a great soccer fan; he has been supporting the Birmingham club Aston Villa since his childhood.

At the beginning of 2017, Ozzy Osbourne gave an interview to The Times and confessed he had never been addicted to sex. The musician wanted to justify his cheating and invented a legend about a mental disorder. As the spouses visited a psychotherapist, their relationship improved.

Ozzy continues to surprise people. On August 21, 2017, the eve of a solar eclipse in the United States, Osbourne organized a rock music festival Moonstock; the final of the concert coincided in time with the eclipse, and the artist performed the song “Bark at the Moon”.