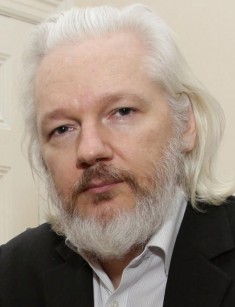 Julian Assange is a cult and controversial personality of the modern times who attracts the interest of the international community. The Australian’s activity is characterized in different ways – for some people, Assange is a journalist who loves the truth, for others – a terrorist, and other people call Julian a cyberhero. Due to the website WikiLeaks which specializes on the publication of "top secret information" Julian Assange is considered to be the most influential person in the international mass media.

The journalist has on his account many loud scandals in the world’s great powers connected with the disclosure of the corruption of military crimes. Because of this the Australian became the major enemy of the USA and was in the international wanted list of Interpol.

Julian Paul Assange was born on the 3rd of July, 1971 in the northeast Australian city of Townsville. The political activist John Shipton and the visual artist Christine Ann Hawkins became his parents. They separated even before the birth of the boy. When Julian was born, his mother got married to the owner of the touring theater Richard Brett Assange who gave his surname to his son-in-law.

The future whistle-blower spent his childhood and young years traveling. Because of the specialty of the activities of the head of Assange’s family they have to move from one place to another. The mother of the future software engineer adhered to non-conformism and considered that the school imparted to children unnecessary authorities. That’s why she didn’t send her son to the educational institution, and Julian had to learn sciences on his own. During the breaks between self-education, the boy attended schools in different town (Julian has replaced 37 schools), but these courses weren’t long-lasting.

When Assange turned nine, his mother got divorced from his stepfather and got married to the musician Leif Hamilton with whom she gave birth to one more child. However, the youthful adventures of the software engineer continued – his new stepfather turned out to be a member of the sect in which they took newborn babies away from their families for the sacrifice. Then Julian's mother with her two sons had to escape, and Assange spent the next five years in constant travels.

When Julian has reached a mature age, he became seriously engaged in software engineering and founded the hackers’ organization. Alongside with this, Julian wanted to receive higher educations, but he hasn't graduated from any university because all of them were controlled by the intelligence agencies and the programmer didn’t want to connect his activities with them in any way. Though, it didn’t prevent Assange to become the skilled professional person in the IT sphere.

The hacking of the central server of the Canadian telecommunication company Nortel Networks became the first result of Julian Assange’s activities. There were initiated the criminal proceedings against Julian Assange, but the journalist just got off with the penalty as the damage of the company wasn’t significant.

After that Assange was engaged in the sound software engineering and became the administrator of the leading Australian web hostings. In parallel, Assange created the programs referring to the system of network safety and also created the software for the police. Moreover, together with his mother Julian created the project on the protection of children rights within which he unmasked the corrupted organizations connected with the social protection of the citizens and health services. Assange told about his experience in the software engineering and hacker activities in his book Underground in which he described his "dangerous" hobby in details.

The WikiLeaks website which was founded in 2006 became the major project for Julian Assange. On this web space, the journalist began to publish the data unmasking the corruption schemes in the highest levels of government all over the world including Russia. The web-source has reliable protection, and it's impossible to remove already published information from this website. The Swedish PRQ.se company became the platform for this website, and they guaranteed that this website would never be removed according to the legal requirements.

From the pages of Julian Assange’s "factory of the truth" during ten years of its activity, the exposures became a matter of public record, and they caused international scandals. The hacker disclosed hundreds of secret documents connected with the war in Iraq, Afghanistan, and Syria which contained video prods of the shooting of the civilians by the American military men in the zones of military conflicts. Moreover, on WikiLeaks, there was published the confidential correspondence of the USA CIA head and the facts of total surveillance of the American intelligence services over the leaders of the leading world countries.

The scandalous fame of WikiLeaks website reached far corners of the globe. In two years after the beginning of the functioning of this website, Julian Assange received Amnesty International Award for his activities on the exposure of the corruption schemes in the circles of the Kenyan government. Assange's personality attracted the attention of the web users that's why in 2010 he became the Person of the Year by the version of Time magazine, and Guardian edition included the name of the software engineer into the rate of the most influential media persons in which he took the 58th position.

In 2013 the journalist loaded on WikiLeaks the leaks to download the secret documents which in general reached 400 gigabytes of information. Assange coded this data a key and promised to publish this information in case of harming any member of the organization among which was Edward Snowden. In 2016 Julian Assange unsealed the confidential reports of the European Union on the preventing measures against the refugees and told who was behind the scandal with "The Panama Papers" which unmasked many well-known people in their involvement in illegal offshore schemes.

In 2010 the Sweden authorities of initiated judicial proceedings against Assange. The Australian was accused of sexual harassment and violence in the relation of two women. Julian himself assumed that this case was framed up after the publication of the documents and videos referring to the military operations of the USA in the Middle East on the WikiLeaks website. The lawyer of the software engineer appealed against the judgment, but Interpol anyway received the warrant for the arrest of the Australian programmer. Being in London, Assange turned himself into the police and later by order of the court was released on his own recognizance and on the bale of £240,000.

Besides the prosecution, the software engineer's accounts which he had in PostFinance bank were frozen. The account of WikiLeaks in PayPal international system was also blocked. The same happened with his Visa and MasterCard accounts. The administration of Facebook and Twitter social networks also began the prosecution of Assange and his supporters. Their administration closed suspicious accounts and removed public messages of the users.

In 2011 the British authorities claimed for the programmer’s extradition to Sweden. Since 2012 Julian Assange has settled in the Embassy of Ecuador in London because the authorities of the South American country offered him the political asylum right after the beginning of scandalous disclosures.

In his new shelter, comfortable conditions for life were provided to Assange: his apartment includes a room studio in which he has a bed, a desk, chairs, computer and even a sunroom and sports training machines. The journalist works seventeen hours a day and continues his activities to restore the truth.

For the time of refuging of the Australian software engineer, the British authorities have already spent $8 million for surveillance in hopes to arrest the hacker till the extinction of the prosecution by prescription which will come in 2020. On the pages of the website www.swedenversusassange.com created by Assange, he tells the facts which confirm his innocence. But already in 2015 on the three of four charges the five-year limitation period expired.

Under the imprisonment, the hacker is engaged in the journalism and works as a TV host of Russia Today channel which is focused on the foreign spectators. In 2012 there was premiered Julian Assange’s program The World Tomorrow.

The software engineer repeatedly tried to publish his own biography. In 2011 the Scottish publishing house on their own will published his book "The Unauthorised Autobiography." Earlier Julian broke the contract on the publication of this book as he had considered this book to be too intimate for the publication. Three years later the author took one more attempt and published the book " When Google Met Wikileaks" in three languages. Except for the story of his life he published the facts which expose the founders of Google search engine.

Being under forced imprisonment, Assange keeps in touch with the world. In 2014 he announced the release of the clothing line in cooperation with the Indian Franchisee India brand.

Little is known to the public about Julian Assange’s personal life. By recognition of the hacker journalist, he was married once. His spouse Teresa gave birth to their son Daniel in 1989 but right after the first scandal connected with the hacker activity Assange she left him.

Within several years Assange has sued his son from his ex-spouse. There is information that the trial involved difficulties. At present Julian has completely gone gray what can be seen on the latest photos of the software engineer. During the next fourteen years, the truth-lover was bringing up his child as a single father. Though, after the beginning of criminal prosecution, he had to stop communication with his son who wasn’t angry at his father and supports Julian.

Julian Assange regularly becomes the character of the movies. In 2016 the founder appeared in the documentary O Sentido da Vida. There was shot the series about the life of the software engineer under the title Underground: The Julian Assange Story. In the gripping movie, The Fifth Estate Benedict Cumberbatch performed the role of the famous hacker. Assange's image even appeared in the animated high-rate series The Simpsons.

The celebrities often visit Julian Assange. It became known that in 2016 Pamela Anderson visited the hacker. She is said to have a love affair with him. Pamela and Julian don't comment on these questions of journalists but talk about each other in a flattering manner.

At present, Assange deals with the issue of his freedom. The software repeatedly appealed for the restoration of justice to the Organization of United Nations. In 2017 the case against Assange filed by the Swedish prosecutor's office, at last, was closed. But Julian still lives on the territory of the Embassy of Ecuador as London police can still arrest him in connection with Assange’s disobedience to the British authorities in 2012.

In October of 2017 Russian journalist Vladimir Posner visited the Embassy of Ecuador and they talked together with the disgraced software engineer. After the conversation, the reporter highly appreciated Assange's actions. The Russian TV spectators saw Posner's interview with Julian Assange on the 30th of October on Channel One. 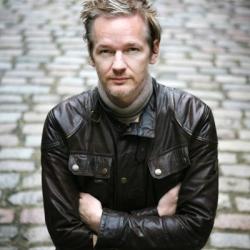